This weekend the classics season comes to a close. All good things must end, but at least it goes out with some style. Going like Elsie, as you might say, and this weekend the music is playing out in the beautiful forests of Luxembourg. And while some places seem almost embarrassed to be holding a race for women, the Grand Duchy ain’t. Other races may be reduced to multiple laps of the local car park, but here they’ve laid out a 50km loop that passes at its closes within 10 km of the centre of Luxembourg Ville. Someone up there likes women’s racing, because the Festival Luxembourgeois du Cyclism Feminin 2010 has not one but two top level races, Saturday’s 3rd GP Elsy Jacobs and Sunday’s first edition of the GP Mameranus.

So first to the history. Who’s Elsy Jacobs? Wiki puts it directly: "the first winner of the UCI Road World Championships - Women's Road Race, which took place at Reims, France in 1958 and Hour record holder from 1958 to 1972." Mameranus is a little more obscure. Yes the race starts and ends in the village of Mamer, but Mameranus is a local hero, the chronicler of the 16th century Holy Roman Emperor Charles V. OK, I don’t see a cycling connection either, but don’t quibble.

Now if you’re particularly alert then you might notice something when you look at the maps and profiles for the two races. The GP Elsy Jacobs starts in the village of Garnich, follows a 54km looped course to return there then finishes with six laps of a local 10km circuit for a total race distance of 114km. 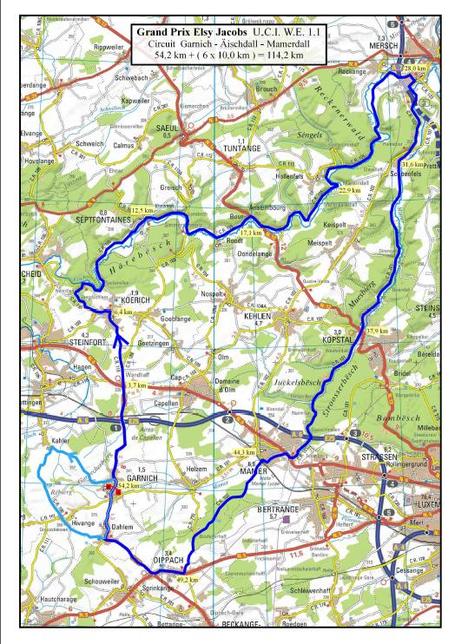 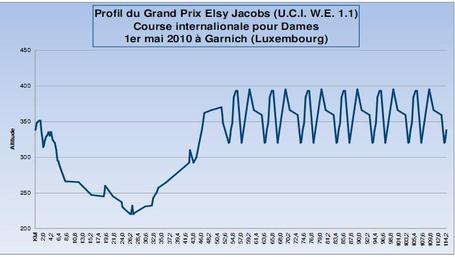 The GP Mameranus starts in the small town of Mamer (which is virtually a suburb of Luxembourg Ville), follows a 54km looped course to return there then finishes with eight laps of a local 7km circuit for a total race distance of 110km. 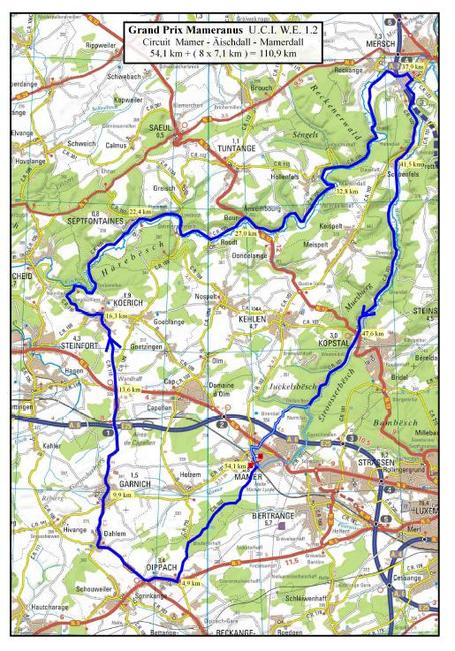 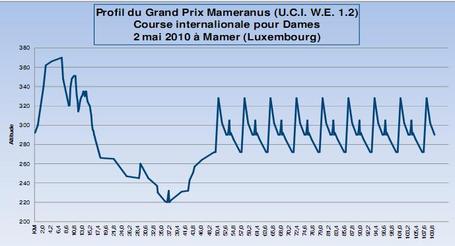 That’s right, they both use exactly the circuit, but start at different places. The circuit of the seven castles they call it, "Le Circuit des 7 Chateaux". The organisers have put up a couple of pdfs with pictures of said castles, one and two. Well what more do you want? Luxembourg’s not a big place. If you ever visit then you will spend the first day exploring the old defences and tunnels of the Ville, the second day going to see the castle with the chairlift, and then, erm, well. Well next time you might think of going to see the seven castles. It’s hard to see how steep the climbs on the final laps are from the raw profiles (if you want more details then here are the links to download the race books for the GP Elsy Jacobs and the GP Mameranus, both pdfs), but they look fairly similar. Probably not a day for the sprinters.

And just to emphasize that, here’s Cervelo’s team for both races:


If you weren’t scared of them before then read that again, as any one of those women could win and the other teams are going to find it hard to stop them dictating race tactics. Elsewhere HTC-Columbia bring Judith Arndt, Noemi Cantele and Evie Stevens, while Grace Verbeke and Emma Johansson lead Lotto and Red Sun respectively. Beyond those usual names you might also see Elena Berlato of Top Girls Fassa Bortolo, Carly Light or Tiff Cromwell from the Australian national team, or Christel Ferrier-Bruneau of Vienne Futuroscope in the top five, but a lot of the smaller teams will find it hard to keep up if Cervelo push hard in the final laps. Here are the full start lists for GP Elsy Jacobs and GP Mameranus. If you can read French then the main site has all sorts of other goodies

No hint yet of any video coverage, so if you find any then please share.