As the cycling sun sets over the Muur van Geraardsbergen for yet another year leaving one solitary figure on a  Bianchi muttering to herself "I did it! I did it!", the classics season moves on. The men head west to a place the Estate Agents promise is Paris, the women East to the Dutch province of Drenthe for a series of three one day races based around the town of Hoogeveen, right by the border with Germany. On Thursday it’s the Drentse 8, Saturday round three of the World Cup, the Unive Ronde van Drenthe, and Sunday the Novilon Eurocup Ronde van Drenthe. And this part of the Netherlands loves its bike racing; Last year’s Vuelta started in the provincial capital of Assen, and the response from the locals was so good that a second day has been added to the men’s event this year, so this is a set of races that is pretty secure on the calendar.

The Drentse 8 traces a 47k double figure of 8 starting and ending in Dwingeloo (and if you watch the video you’ll learn how to pronounce it), which is repeated three times to give a race distance of 141km. The official site doesn’t have any profiles, but take a look at the start list. HTC-Columbia lead with Teutenberg and Hosking, Cervelo with Wild and Duester, Noris with Angela Henig, Lotto with Vicki Whitelaw and Rochelle Gilmore. That sounds pretty flat to me. If you’re still not convinced then check out this video of last year’s finish where the top three were Ina Teutenberg, Regina Schleicher and Kirsten Wild (ignore the title – it’s wrong). This site also has some wonderful photos from 2009, complete with a snap of Charlotte Becker’s company bike. No mention on whether it has concealed sirens and lights. 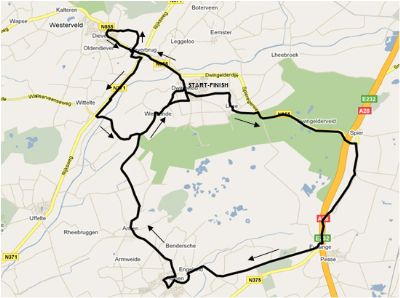 Saturday is the main event of the weekend, the Ronde van Drenthe, starting and finishing in Hoegeveen. This race last year was Emma Johansson’s first major win, and the start of the long battle between her and Marianne Vos for the the World Cup leader’s jersey. Here’s a nice report to give you the feel of the race and how developed, and here’s the proper video. There are three cobbled sections in the first half, probably too early to affect the result but, the key points seem to be the second and third ascents of the Bamberg at 47km and 13km to go. Meijco van Velzen again took some great photos, the most important perhaps being this one near the bottom of the first page. Now I’m no aviation expert, but putting together that with my rudimentary understanding of the Dutch caption and I make that TV coverage. Unfortunately for the moment that’s only expected to be on local station RTV Drenthe, but it could be that this page will be streaming the race live on Saturday. From the main site here's the start list and route. History suggests that the sprinters don't own this one, and also that the Dutch like to make a good show in their home race, so I'll go for Vos ahead of Blaak and Bosman. As for who's top candidate for the Big George Broken Handlebars .... no, not going there this week. 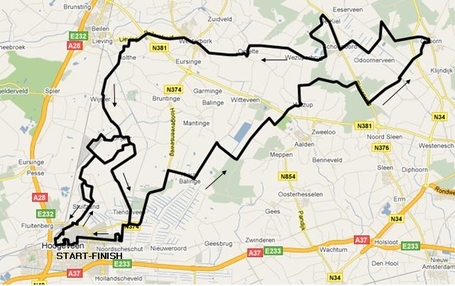 And don’t forget day three of this series, Sunday’s Novilon Eurocup Ronde van Drenthe. This one starts in Coevorden, but ends up once more in Hoegeveen, and may be even more selective than Saturday’s race, with four ascents of the Bamberg in the final 35km (hey, this the Netherlands here, do you think that climbs just grow on trees?). The last three winners were Vos, Kristin Armstrong and Giorgia Bronzini, suggesting that sprinters might just make it to the end, but it’s unlikely. Meijco once again has some great snaps from last year, including one of Vos with her dad (The name’s Vos. Henk Vos. Is that a cool name, or what.). According to this (I think) there will be live radio coverage only, plus TV highlights in the evening. Again here's the start list and route. 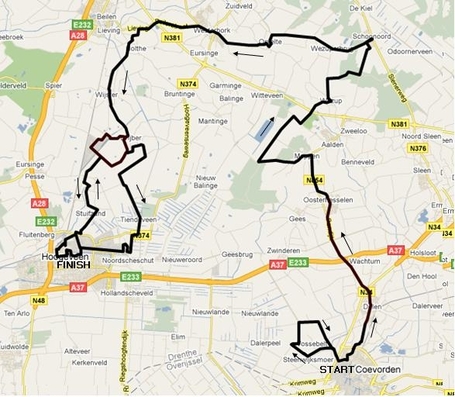