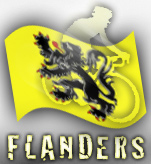 Txirla hereby decrees that this Wednesday-tomorrow-will no longer be known as Hump Day! Instead it will be called Flat Wednesday in honor of the two races that we'll see. No humps allowed!

First up will be Scheldeprijs, whose biggest hills on the day are the climbs from the mortar to the tops of its pretty smooth cobbles that the riders cross four times during the race. That's the deal with this race: flat, flat, flat. It's staged a little further north than the rest of the Flanders Classics-near Antwerp-and it's all about the final bunch sprint. And the crashes:can't forget them. It seems to me that the main purpose of these cobbles is to shake up the peloton just enough for a crash or two to occur. Otherwise it's balls out to the finish line where last year we saw a spectacular crash that took out several finishers (thanks Robbie!) and allowed Ale-Jet to win the thing.

Since this is a sprinter's semi-Classic, it stands to reason that all sorts of sprinters are here. The main question is which of them will go all out and which will hold something back for Paris-Roubaix. On the flip I'll handicap them for you

1) Sprinters no entered into P-R so will go all out:

Its up to you to figure out who will truly sprint and who won't.

A little later is stage three of the Tour of the Basque Country. When I first thought of combining these previews, it was because I thought stage three was the Queen stage with the biggest mountaintop finish so far this year. Alas I was wrong; that stage is tomorrow. What we got today is probably the flattest of the PV stages. Oh there's a couple of hills, particularly early on before we get video, but the course is generally downhill. A slight cat 3 peak 15 km or so from the finish than it's smooth sailing to the end.

Since that's the case, it means we get to see the Oscar and Al show for one more day. Yeah there's one or two other sprinters in the field (Francisco Gavazzi and Davide Vigano at least) but the first two mentioned are head and shoulders above the rest right now. Any other result other them those two being 1-2 in whatever order would be an upset. Enjoy!

One final thing. What I really want to talk about. Since we are about to see Scheldeprijs, we on the second of the three Cobbled races that switched dates before this year. So far then, which race made the wisest decision? My thoughts:

- Scheldeprijs made the best move. The Wednesday after Paris-Roubaix feels like...hmmm....you ever go to one of those mega-rock concerts with bands playing all day and night? Zillions of people? Usually the last act was lesser known. The rationale was that with said lesser known act to close the concert, some of the fans might leave earlier so the mind-boggling traffic jam might be a little less. Scheldeprijs always felt like an afterthought. The cobbles were nothing like the cobbles in most of the earlier races. It was a simple race to bridge the gap to the Ardennes.

Now Scheldeprijs is in a much higher profile slot and it will gain in stature. Good move for them.

- Brabantse Pijl hasn't happened yet but I'm thinking it was at least a break even move. Before they were overshadowed by E3. Now they are in the old get away Scheldeprijs slot but the Brabant Arrow feels more like a true Flanders race than Scheldeprijs did to me. There are hills though the race is usually won by a sprinter. I dunno. It just feels more true to Flanders and so in that sense the season is extended a little bit. The field is still second rate but you get some first rate riders, including guys who are using is as a final tune-up for Amstel (Oscarito).  This is an okay move.

- Where does that leave Gent-Wevelgem? Still not in the best slot. E3 overshadowed it this year, just like E3 did to Brabantse Pijl previously. It deserves a date where it shines; where the cobbles riders make a point to race it hard and this ain't it. I am wondering if it should move up further and race a week after Omloop/KBK. That's a dead week for the A-class sprinters and cobbles guys with just West-Vlaanderen taking place. They don't race that. It would also coincide with Paris-Nice but sprinters don't race that much either. It would not mess with Tirreno-Adriatico. So here's what I'm saying with major one day Cobbles races in bold and climby/stage race set of races italics.

Weekend one: Omloop HN and KBK (and the Swiss/Italian counterparts, Insubria and Lugano)

------Wednesday-Friday: West-Vlaanderen plus start of T-A

-------Wednesday Dwars door Vlaanderen and Catalunya during the week

Weekend five: E3 with an open slot for a lesser race like

------Wednesday: Scheldeprijs with Pais Vasco during the week