Share All sharing options for: Tomorrow: Basque Country, Queen Stage. Should Be Fun.

First, before we get into cycling, let me dispel some random Swedish rumors. Yes, I do type my own material. How do I use a keyboard? Telekinesis. All Bivalves have such powers. That's why you never see a clam with a keyboard.

As the title says, tomorrow is the Queen Stage in this, the best of all week long stage races and it promises to be a humdinger.  Let me set the stage for all of you who haven't been following because you are stuck in some Low Country tidal flat. (My relatives report that the PdC crowd was well behaved-except for a night of murder. My only advice to Chris is to be careful the next time you visit the Puget Sound.)

As usual the first three stages have seen more than their share of categorized climbs, enough to shake some of the pre-race favorites out of the case for the win on Saturday: Sammy Sanchez, Thomas Lofkvist, Brad Wiggins, Zeke Mosquera, Andreas "Seahorse" Kloden, Juan Manuel Garate, Jakob Fuglsang, Danny Navarro, Leeenos, Dave Zabriskie, and Frank Schleck are all out of it. But as you will see there's still a bunch of riders who are still in position to win. Before we get to them, let's look at tomorrow's stage profile on the flip

Quite a hilly affair. That last cat 1 climb is not technically at the finish. There's still 2 km to go after it so we'll no doubt see some frantic time trialing by the leaders to keep their advantage.

Below is the finishing climb: 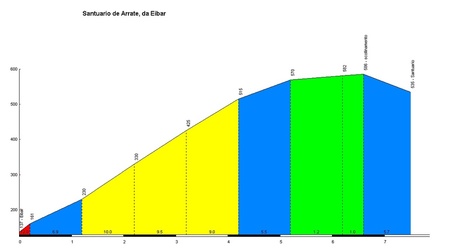 Nice, eh? So who is gonna contest this climb? We got a couple dozen goats, all of whom are even on time, which thus promises some fireworks:

That's quite a list of climby types and again, none of them are defending a lead so you can expect attacks from anywhere. Nice.  Just want one wants: a bunch of climbers, all of whom have had a couple good days to be primed for the big stage, none of whom has an advantage over the others. Who do you think's gonna come out on top? Better yet, who do you want?