We're in the City of Light today, munching croissants and contemplating a rather jarring look at Sunday's course on our way down yesterday. Internet is fleeting, so I'll be a bit brief. And on the flip...

Our first stop was the Velodrome de Roubaix. Not much to say, other than it is what it is, an old, spooky, drab place that evokes cycling dreams of the highest order. 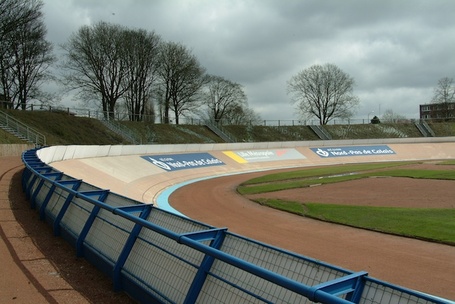 Stop number two was the Trenchee d’Arenberg, where we got out the bikes and took in part of the parcours. The Trenchee (a/k/a Trouee but my Parisian hosts insist the former is the local version) is Paris-Roubaix’s answer to the Koppenberg: too far away from the line to steal the show but it weeds out plenty of riders, and otherwise serves the cyclotourists as the best example of why you should tremble at the thought of riding the parcours. So for comparison’s sake, we checked out the Trench and can report the following:

If Paris-Roubaix cobbles are worse than Flanders’ it’s lack of uniformity. In the Trenchee cobbles jut out in every direction, and at first glance they lack all shape. Not entirely true; on our second passing (not a typo) I did notice the pattern you’d expect of stones set in staggered rows like the laying of bricks. But the stones aren’t polished,  they’re prone to edges sharp enough to start breaking things, they’re not close together, the crown of the road offers no relief, and the conditions change every 50 meters. It’s dead-straight 2.4km, with a dip in the middle (sinking into the old mine) so you can experience the sensation of holding on for dear life as the you descend one of the world’s worst cycle paths. So the range of hard rows to hoe goes from the Muur (steep but uniform) to the Koppenberg (less uniform and smooth enough to bring in slippage) to the Trenchee (just a complete fucking mess).

We rode backward rather than forward, because the Trenchee empties onto a busy road that we didn’t care to ride. So leading up to Wallers we found some nice normal streets through dark, quiet old villages with the odd guy sweeping up dust from the gutters for Sunday. Pas de Calais is putting on its best face. Eventually we hit another secteur where the course arrows directed us onto what looked like a tractor path through a farmer’s field. In fact it was the Secteur Wallers/Haveluy (a/k/a Pave Bernard Hinault), a 2.5 km stretch of muddy cat 4 cobbles with a couple right hand bends as it traverses a large pasture. These cobbles look like hell, but in reality they were a welcomed relief from the Trenchee: packed with enough mud to soften the bumps and allow you to open up the speed a bit. The crown is being reclaimed by mother nature, and you can imagine that prior to its use in 2000 the entire pathway really wasn’t even passable except by farm machinery. One of my side projects is to ask Les Amis de Paris-Roubaix how they found secteurs like this. 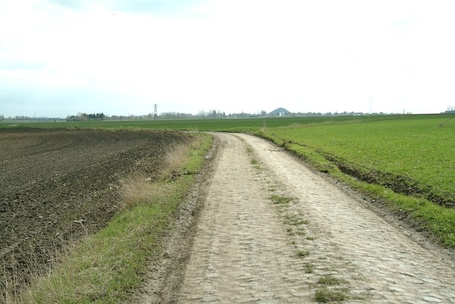