Yep, this is Official stuff here.  What you see is what the teams actually did-and there's some surprising results.

Before we get to them, a slight explanation is needed. The table below ranks the teams this year and last. Of course VDS this year lists more races so this isn't a perfect comparison. But its close because, as you'll see below, most of the new races are not contested much by the bigger teams: you have to go far down the table to see teams that are doing better than you might thing because of those Cat 6 races.

Okay, on to the rankings! Actually I divided the table into three parts because with 54 teams, it's way too freaking long all together.

- Quickstep was down Devo, Chavanel, and several other scorers

- Columbia lost a bunch of riders to transfers.

Once we have a few year's data, it will be interesting to see how often teams cross the 3000 point line in the spring.

I am remembering when Astana did not get a bid for Paris-Roubaix. management's reaction was basically, yeah we don't really deserve a bid but next year we will put together a solid cobbles team.  Maybe that's just idle talk but I don't think so. Considering how well they did in the Ardennes, this management I'll bet could, with the right riders, be a force on the cobbles. But really that reaction makes me wonder if they already know Contador is gone and they are looking to wards what they really like doing.

Pretty simple, eh? That's what getting Cancellara back , along with Schlecket not having a strong Ardennes campaign does for ya. Imagine if they could get both parts of their team firing in the same season. Hopefully we'll get the chance to see that.

24% of their points came from stage races, 33% from cobbles Classics, 43% from other (Ardennes plus Big Mig). Pretty balanced. Now can they translate this into Grand Tour success? Buying Giampaolo Caruso helps with that. He was 12th on GC in 2006.  Three VDS teams have him.

One man teams: the rider who scored the highest percentage of points for their team:

With Evans (330 points last year) and Van Summeren (240) gone, this team is down 205 points. Now they hope that De Greef (Giro), Moreno and Van Den Broeck (Tour) and whoever is standing (Vuelta) can make up for Evans.

Number of points those same riders earned in spring of 2009 with Columbia: 1580

Still, Columbia is down 1195 points from last year. We see that the departed riders scored 1580. Who made up the slack, especially with Cavendish being down 365 points too? A little bit here and there:

Plus a little but here and there. I am disappointed in Peter Velits though as he's down 130 from his Milram days.

Last year, Glorious Heinrich Haussler scored 985 spring points; this year just 200. Add this 785 points back on to this year's total and you get 2510, or three measly points out of 1st place for the second year running. They're just one Barbie short of a return to dominance.

(Yes, you could also blame the difference on Thor's 510 point drop but then again Hammond scored a lot more points, and Bos and Tondo are new to the team and, why are you trying to ruin such a neat little narrative anyway?)

And, yeah, Garmin's 600 point bump is due to the Wenatchee Wonder staying healthy this year.

Riders hurt last spring with their point bumps this year:

Point gains from last year to this:

Considering that BMC bought all its team leaders this year, Vacansoleil is the team that improved the most this year while using basically the same lineup. Their highest profile acquisitions last winter, the Feillu brothers, so far haven't scored a point. Everyone who has scored has been with the team for two years now.

Number of riders who have scored this year to date:

Columbia always wins this. Usually only Saxo rivals them (and used to win it before Stapleton had fully taken charge). And, yes, five of these Leeky riders scored their points in a TTT. That Liquigas is currently blowing away the field to me speaks that they will could have deep teams for all the Grand Tours. Note that Jen Grey (Pellizotti) has scored zero points this year (like last year). Basso has scored only 15, Szmyd 0, Nibali 80.   If they win the Giro they could start quite a roll that lasts the rest of the year.  This team could move up fast.

This team is remarkably consistent. It stays right around 12th-13th-14th place all year long and have done so for a few years now. The names change some (no Astarloza but Anton has finally regained his 2008 form) but the team stays even.

As noted above, Chris Horner has 45% of Radio Shack's points. Remarkable. If you look at the birth dates of the CQ top 100 point earners of the year, you see Horner is the 2nd oldest rider: only Jens! beats him and only by 36 days. Next oldest is Robbie McEwen, 8 months and 1 day younger than Horner. Hincapie is 20 months and Garzelli is 21 months younger. Petacchi's a babe at 2 years and 2.5 months younger.

Their 1,773 point drop is the biggest from last year to this. Amazingly, Boonen actually gained 140 points year-to-year. So where did the drop off occur? You really need to ask?

Davis: they lost him to Astana and he hasn't scored there either. That's a 250 point drop.

That's gotta hurt. So why did this occur? Lefevere's ranting? Nah.  Quickstep's fall from grace happened from the beginning of the year. Quickstep has been a solid top 10 team for the past several years and usually gains the most points on their home surface. Lefevere's been the same as far as I can tell. Why would so many riders fall away the same spring? Honestly I have no guess here unless Boonen's cocaine connection has moved on to the rest of the team. (I am kidding there folks.)  Any educated guesses would be appreciated.

Since I did it for Sky,

The only points BMC earned in the spring of 09 were by now departed Tony Cruz: 60 points at that Scheldeprijs McEwen-induced crash fest.

Call it a wash, even with Ballan out of commission. As an aside I think that BMC is entirely wrong to suspend Ballan and Santambrogio and if the riders had any sort of union they'd be riding still.

I'm thinking that this is the first team that really benefited from the new Cat 6 races. 610 of their 970 points came from Cat 6's. All of Keukeliere's, Duque's, Minard's,  were earned in Cat 6 races. But what about the teams in the top chart? Any of them benefit much from Cat 6's?  Here ya go with some info:

- Astana got 125 points at Trentino with the Vino win as he prepped for LBL.

- Rabobank (80), or Brown got his points in one early season race plus Nokere Koerse.

- Liquigas (350) benefited the most, mainly by having some of their younger riders winning races.

It appears to me that the Pro Tour teams use the Cat 6 races to tune up. These aren't races for them to target (obviously) and pretty much they don't use these races to rack up cheap wins.

335 points behind the last team in the top table, I'm guessing that they will overtake Cofidis and at least one of the teams in the top table. Last year Garzelli scored 640 points in the Giro, and Francesco Masciarelli added another 175. Who will they pip for the top table?  Probably not BMC with Evans in the Giro. Probably Quickstep, 490 points ahead of Soap & Water, gets the hook.

Of course this team might make it to the top table too. To do it though, Petacchi and Cunego need to come through.

...Has an outside chance as well. Scarponi, Serpa, Leo Bertagnolli, and Ginanni all could win stages and Serpa could have a top 10 GC placing.

Finally the teams that have one or two lucky finishers, usually in Cat 6 races.

And this team is non-stop whining about not getting a Tour invite? Sweet Creamery Butter! You gotta at least try to earn it!

Which rider from this last table is the best? Here are your choices:

Below is Daniel Schorn. Study it. He's the only rider from this team to score. 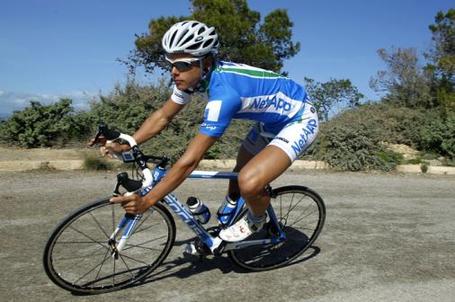