Giro d'Olanda -- What It Was Really All About

Share All sharing options for: Giro d'Olanda -- What It Was Really All About 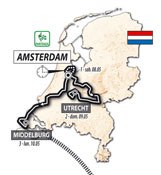 The Giro d'Italia has completed its three-day Dutch adventure, meaning Holland has only to suffer through one more grand tour before they can travel their own roads again in relative peace. So how'd it go? Well, the international media can't write an article without using the words "marred by crashes," as if that were new to cycling, but in hindsight there seems to be several more interesting storylines to look in on as the teams load into trains, planes and automobiles for Cuneo.

1. Bringing the Giro to the People!

If you were to ask race director Angelo Zomegnan how it went, no doubt the first thing out of his mouth would be about the massive crowds that turned out for the three stages of the Giro in Holland. Now, Holland is a pretty densely populated place -- the provinces of North Holland (Amsterdam), South Holland (Rotterdam, the Hague), Gelderland (Arnhem, parts of stage 2), Zeeland (Middelburg) and Utrecht combine for some nine million people, and at least as many bikes. So generating turnout wasn't a big stretch.

But it was impressive to see crowds on the streets of Utrecht yesterday several deep along the route, packed in the way you usually only see at the finish. Part of any race's desire in bringing the circus to town is to generate this kind of reaction from the locals. Right now, this side of the story is headlining at De Telegraaf. Estimates are 500,000 people along the route Sunday, one in 35 Dutch citizens... and that was in meh weather, with free TV inside. Lopex reports seeing pink balloons and banners in various public spaces. Superted was out and about and didn't see any crashes, just huge numbers of people and a lot of partying going on. I personally loved the Giro mural painted on some airport runway yesterday. I'll put the shout-out to any of our Dutch friends for more details. But there doesn't seem to be much bemoaning the road conditions happening from the inside.

There were some problems with the crowds, however. Check this picture. Hey, I love cycling too, but seriously, wtf? Overcrowding -- most race organizers' dream -- was something of a nightmare at times.

2. So What About Those Roads?

Tight turns, paint and furniture are featured in just about every bike race on Earth, from mine to theirs. So too does pretty much every cyclist contend with wind, rain and other riders in the way. Oh, and then there was the crash caused by a Moto hitting the brakes. Don't these guys have to pass a test or something? Anyway, wanna know what the real problem with those roads is? They're in Holland! I'll wait for more coverage, but my sense is that the style of racing there -- on flats, in crosswinds, was simply too foreign for a lot of the Giro peloton, which is usually a twitchy bunch even in Italy. Look at the results:

* Saturday: Five Italians in the top twenty, nobody higher than Marco Pinotti at 10th. OK, that was a time trial, the national non-specialty. Winner from England. Domenico Pozzovivo crashed himself to the fringes of contention.

* Sunday: Nothing too dramatic in terms of nationalities. I could suggest that the Italian-accented peloton (five teams, plenty of other individuals) was responsible for the crashes, but I have no proof. Just that there were crashes. And a lot of the riders are, in fact, Italian. Anyway, an American winner; meanwhile Alessandro Petacchi, Fabio Sabatini and Sacha Modolo made the finale, but at least in Petacchi's case it wasn't his style of finish. Farrar said beforehand he liked it. Likes it even more now, I'd guess. Domenico Pozzovivo loses another 37 seconds.

* Today: Splits all over the road, due to the crashes and the crosswinds that thwarted the usual chase-back. Belgian stage winner. This time all the Italian sprinters wind up back in the Autobus, though for the second day in a row GC guys like Nibali, Basso, Garzelli and Scarponi make the front group and preserve their time. Domenico Pozzovivo's stage-hunting prospects improve vastly with his loss of another 8 minutes.

Conclusion? It's never fair to generalize, but racing grand tours generally and in the low countries in particular requires certain experience. The Giro has its share of inexperienced riders, and mayhem often ensues, to the point where even some of the experienced guys get hung up, or worse. Zomegnan didn't sell out the race, and the Dutch people didn't sabotage it. I would probably concede that the Italians didn't ruin it either -- most of the big names did about what you would expect overseas. So if the whole thing was twitchier than normal, well... that's cycling.

Crashes everywhere. Most of Team Sky down. What is wrong with Zomegnan? Ridiculous roads for racing on.