Another day, another leader. Liquigas rode a blistering second half of today's team time trial to seize the stage and put the maglia rosa on the shoulders of Sicilian GC hope Vincenzo Nibali. Gotta do some research as to the last Sicilian to wear the pink... Anyway, Garmin had a forgettable day, missing an opportunity to send wounded leader Christian VandeVelde a nice get-well gift, dropping over 40". Astana were a potential winner today but they too failed to measure up. Some more positive stories would be the nice ride by Omega Pharma, the unexpected limiting of losses by Cervelo and BMC (all things considered), and the strong rides by Katusha, HTC and Sky. But that's sorta splitting hairs -- the gaps are typical early Giro gaps, seemingly significant now but likely to be the blink of an eye when we hit Monte Zoncolan. Results:

Full stage results posted in the comments. And your new GC, looking a bit heavy on the gel...

Screencap of the day: "Where the hell are those guys?" 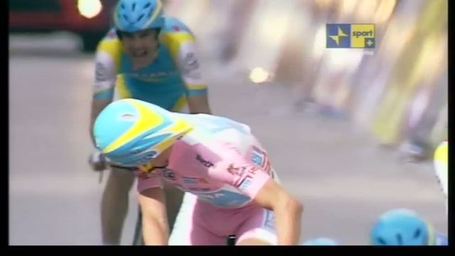