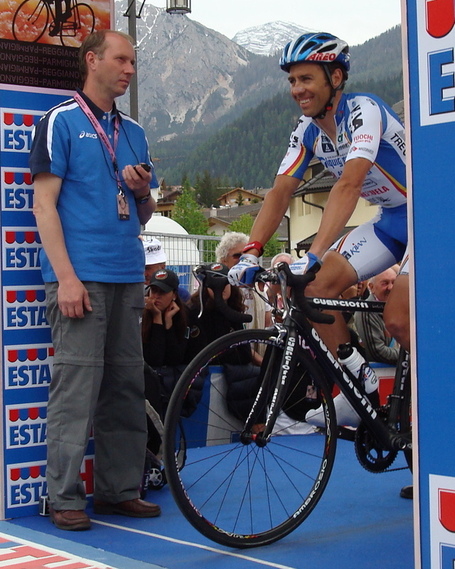 Gilberto Simoni has started thirteen editions of the Giro d’Italia. He was won twice, retired twice, and has finished second or third on six occasions. He counts among his successes stage wins on top of cycling’s most difficult summits, including the Zoncolan - he won that one twice - and Spain’s Angliru.

Despite his successful Giro career, the Tour de France never treated him especially well. His only stage victory came in 2003 in Loudienville after a long escape. All the same, the climber, who shares a home town with Francesco Moser in Trento, remains one of the few active riders to have celebrated stage victories in all three of cycling’s grand tours.

Now at last, Simoni is riding his last Giro d’Italia, a finale that comes after fourteen years as a professional. He has spent the first few stages tail-gunning it, staying out of trouble and waiting for the mountains. For the past two years tell the tale quite plainly, Simoni no longer has the legs for the general classification.

The Giro has visited the steep slopes of the Zoncolon on two previous occasions. Simoni has won both times. Can he win again this year? It may be a big ask. If not the Zoncolon, a long escape over the Gavia or the Mortirolo would provide a fitting end to his career, dominated as it was by successes in the high mountains. In his day, Simoni climbed with the best.

Below the fold, a trip through the career of Gilberto Simoni.

Simoni turned professional in 1994, after a junior career that included a win at the Baby Giro. His career stalled almost immediately. Both his older brother and his father died of cancer in the same year. Subsequently, Simoni suffered chronic bronchitis, so chronic in fact, that he negotiated an end to his contract in 1996 to recover. 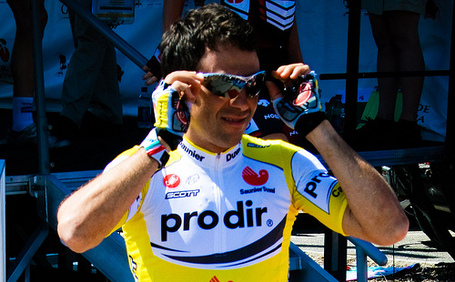 In 1997, he crashed out of his first Giro, hardly a sign of things to come. His real Giro career only began two years later during the rollercoaster 1999 Giro d’Italia.

The 1999 Giro d’Italia had all the elements of High Drama. Marco Pantani dominated the mountain stages, earning four victories. Gilberto Simoni made his first claim in the high mountains by finishing second to Pantani on the Alpe di Pampeago, the steep climb that rises not far from Simoni’s home town. Simoni trailed Pantani by 1:00, a testament to Pantani’s dominance that year. Of course, it was too good to last for Pantani. On the morning of the near-final stage, Pantani’s hematocrit tested over the limit, and the UCI expelled him from the race. At the time, controversy dogged the decision to eject Pantani, and many viewed his exclusion as unfair scapegoating and the doping controls with suspicion. After Pantani's eviction, Roberto Heras won stage which climbed the Tonale, Gavia, and Mortirolo before finishing in Aprica. Gilberto Simoni and Ivan Gotti finished just behind the Spanish climber at same time. Gotti won the overall, while Simoni reached the podium for the first time by finishing 1 second behind Paolo Savoldelli. Simoni had a knack for missing general classification placings by mere seconds. 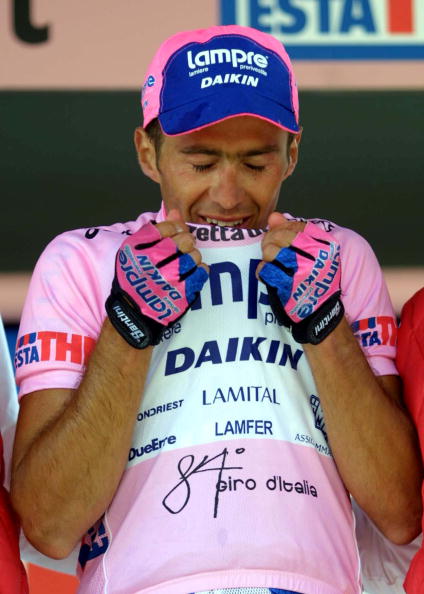 third by a slim margin. Pantani returned to the Giro that year. Riding for the Mercatone Uno squad of Giuseppe Martinelli, Marco Pantani told the press that he might not win the Giro, but he would decide who did. True to his promise, Pantani supported his young team-mate Stefano Garzelli. A mountain time trial provided the finale of that year’s Giro, and at the start of the day, Francesco Casagrande led the overall classification. His hair bleached blonde, Garzelli did a scorching ride to rip the Maglia Rosa from Casagrande’s back. In those days, Garzelli had hair, and Casagrande made the odd fashion choice of securing a scarf around his head for the big time trial. Maybe he hoped it would bring him luck, it certainly did not make him faster. Gilberto Simoni stood on the Milano podium after finishing 5 seconds behind Casagrande. Simoni also celebrated his first stage victory in 2000 at Bormio after climbing the Tonale and the Gavia. Later that same year, Simoni solidified his climbing creds with a stage win at the Vuelta a España. Simoni won on l’Angliru, widely considered one of the most difficult climbs in cycling.

After two podium placings, Simoni came to the 2001 Giro d’Italia hoping to secure the win that had so far eluded him. The 2001 Giro again brought the scandal after the Italian narcotics police raided the team hotels in Sanremo. The raids annulled the next day’s mountain stage with Simoni sitting just 15 seconds ahead of Dario Frigo. Authorities soon found a stack of illicits in Frigo’s luggage, and the Fassa Bortolo rider, who had worn the leader’s jersey for nine days, left the race in disgrace. When the race re-started, Simoni won the final mountain stage in commanding style, two minutes up on Paolo Savoldelli. Still, the turmoil tarnished the race, as the doping story dominated the headlines. These were cycling’s dark years, though it’s not entirely clear that the sport has even now come again back into the light. (The report from Jeff Jones of CyclingNews on the raids is well-worth revisiting. A nice piece of writing, there.)

That season also saw one of the more disappointing near-misses of Simoni’s career. The World Championship road race took place in Lisbon on a hilly course. Deep in the finale, Simoni went clear and held a solid advantage over the main field. Simoni 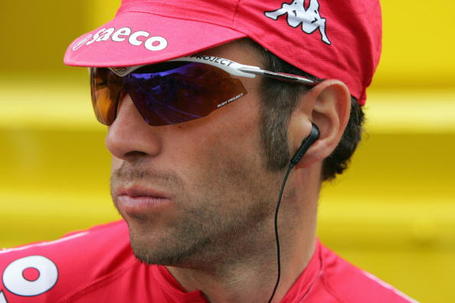 looked on his way to a road race victory, when Paolo Lanfranchi, also of Italy, began to chase. In a famous example of Azurri disfunction, Italian chased Italian. When the field came back together, Oscar Freire out-sprinted Paolo Bettini for the win. Predictably furious, Simoni berated Lanfranchi in the press. He always did have a temper on him, this Simoni. The race and its outcome became a lesson in what not to do at a World Championship.

Things got worse for Simoni during the 2002 Giro d’Italia when the news broke that he had tested positive in an out-of-competition test for cocaine. Say... what? The news broke. Simoni and the Saeco team management retreated to the bus. No doubt some Italian cussing followed. When they emerged, Simoni protested his innocence, but left the race all the same. Subsequent analysis, including hair samples, found that he had ingested the cocaine inadvertently in Peruvian cough drops sent to him by an Aunt. You can’t make this stuff up, really. In any case, rules being somewhat less strict in those days, Simoni returned to racing later that season.

After losing much of the season, Simoni returned with a vengeance in 2003. He shredded the Italian scene, winning the Giro del Trentino and the Giro d’Italia. The Giro d’Italia win was an exercise in domination. Garzelli finished second, seven minutes behind Simoni, who also took the points jersey and nearly the mountains jersey 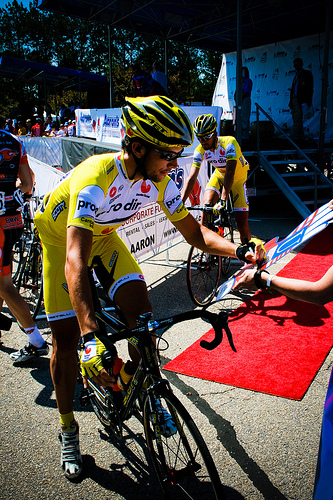 as well. Simoni also celebrated victories on two iconic climbs, the Alpe di Pampeago and the Zoncolon. After his victory in the Giro, Simoni headed to the Tour, touted as a challenger to Lance Armstrong, then at the peak of his run of Tour victories. A war of words between the two riders enlivened the proceedings, but the battle on the road never materialized. Simoni managed a stage win at Loudienville, but never made a serious challenge for the overall classification. Indeed, the Tour de France stubbornly resisted Simoni’s efforts to master it, and the 2003 stage victory remained his only Tour success.

With the support of his Saeco team, Simoni’s dominance over the Giro d’Italia looked likely to endure. Surprisingly, it did not, as first Damiano Cunego, then Ivan Basso eclipsed him. Simoni’s brief moment of popularity also waned, in particular after he accepted Cunego’s 2004 Giro victory less than gracefully. At the summit of the Bormio 2000 climb, Simoni showed his rough edges, losing his temper and calling Cunego "bastardo!" Simoni complained that Cunego had stolen the stage victory and the Pink Jersey, prizes that rightfully belonged to him. The press sided with Cunego, who looked perfectly equipped to become Italy’s next cycling superstar, while Simoni looked like a bitter edition of yesterday’s news. (The story of Cunego and Simoni is more thoroughly told in my previous story.)

The rise of Ivan Basso overshadowed the short-lived rivalry between Simoni and Cunego. Basso dominated the 2006 Giro d’Italia and won popularity with his shy smile and his ability to challenge at the Tour de France. No Italian since Pantani had been able to make a credible run at the Maglia Giallo, and Basso’s smooth style and dark looks recalled Italian heroes like Fausto Coppi and Gino Bartali. For his part, Simoni had no love for Basso, perhaps because by now, he had too often seen this pattern unfold. The enmity boiled over on Sestrière after the final mountain stage of the 2006 Giro. 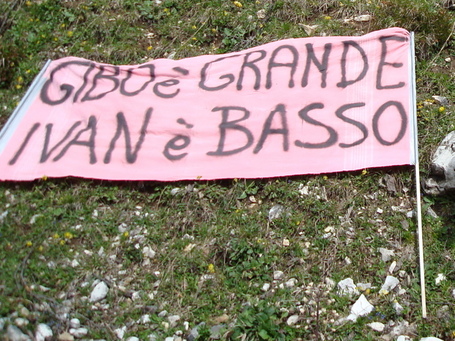 On live television, Simoni called out Basso as "an extraterrestrial." He might as well have called Basso, who wore the Pink Jersey, a doper. Basso protested, and while some observers may have believed that Simoni had the right of it, Simoni’s public image suffered. He looked sour and bad-tempered next to Basso’s disingenuous smiles.

Operation Puerto did much to repair Simoni’s image. Though it might have been bad form to call out Basso on television, Puerto gave credence to Simoni’s accusation and transformed him from a bitter loser to a rider cheated out of a deserved victory. Simoni finished third in 2006, behind two riders implicated in the scandal. As he stumbled through his lame confession of "attempting to dope," meanwhile, Basso’s luster dimmed. Simoni’s consistency and climbing accomplishments began to outweigh his moments of temper in the public view. As contemporaries like Paolo Savoldelli retired, Simoni gained respect for his longevity and for his ability to avoid the scandals that marred the careers of many of his rivals.

Of course, Simoni badly wanted a final Giro d’Italia win, but it eluded him. Fourth in 2007, Simoni could not find the legs to secure another Maglia Rosa, but a second win on the Zoncolon solidified his position as one of Italy’s best pure climbers. 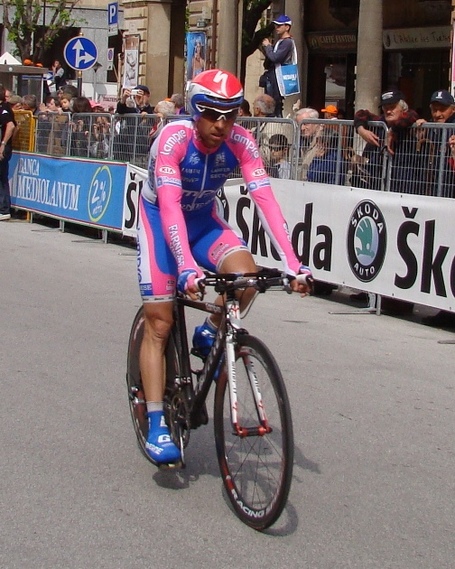 Since then, he wins have proven sparse in the last years of his career. A second place in Tirana behind Emanuele Sella in 2008 proved as close to victory as Simoni could reach.

Now, Simoni races his final Giro d’Italia, the curtain call on his lengthy career, a career that has contained its share of big victories and wrenching near-misses. Why ride another Giro d’Italia? Perhaps Simoni hopes for third win on the Monte Zoncolon. Or, maybe he’ll take a long romp off the front over the Tonale, the Gavia, and the Mortirolo. Or maybe he’ll simply ride quietly in the field, savoring his last trip around his home country’s grand tour. It doesn’t much matter, anyway, for his legacy is secure, the total of his career already measured by his years of riding the high mountains. And when the Giro comes at last to Verona, we’ll say arrivederci to one of cycling’s more colorful characters.