Share All sharing options for: Tour de l'Aude - The Contenders


Bump - All the talk of the race so far has been of the strong winds. In the absence of any meaningful footage of that, here's a video from the windsurfing contest held last Thursday to Sunday at Gruissan, the Defiwind. The wind from time to time was over 50 knots; the winner averaged over 60kmh.

With the final appearance of not one but two start lists for the Tour de l’Aude it’s at last possible to run through who the likely contenders are going to be. This tour is an unusual little beast. It may be one of the two biggies on the calendar, but you certainly can’t win it in the classic "smash them in the hills, hang on in the timetrials" way. Or was that "smash them in the timetrials, hang on in the hills". Whichever way you put it, if that’s your plan then you’re going to run in to a brick wall. Or to be more exact, the brick wall that you expected your opponents to run into isn’t there. There’s just one individual time trial here, the prologue, all 3.9km of it. Not much chance of making a lead that will last ten days. And there’s a team time trial, but the losses are limited there too, so coming in third to Cervelo and HTC-Columbia puts you just thirty seconds down, and last place is guaranteed to lose no more than two or three minutes. And if that wasn’t enough there aren’t any mountain-top finishes. In fact the whole course looks more like ten days in the Ardennes, but warmer, prettier, and with vineyards and stew with five different sorts of meat. None of those flat, piano stages where you hide in the middle of the pack, what matters most at l’Aude is staying alert every single day, and you really need teammates to help you to do that. So who’s this year’s Spartacus, and who’s going to find that the reward for that sneaky biscuit at the back is a ride home with Roger Hammond. Carry on over the page for my little run-down.

If you want to win here it helps to have a strong team, and it’s hard to pick six riders from the peloton that would make a stronger team than Cervelo (as the press release announcing their line-up made clear, the only names put on domestique duty right from the start are Bruins and Armitstead, who finished 7th and 14th last year). They will almost certainly be riding to get the win for Claudia Hausler, whatever spiel they may give about "we don’t mind which of us wins" Claudia’s been away from the bike a bit this winter catching up on her studies, but she was still there right to the foot of the Muur in the recent Fleche Wallonne. And if you want a plan B, then that could very well be sending one of Sharon Laws (6th two years ago), Carla Ryan or Regina Bruins up the road while everyone watches Emma Pooley. 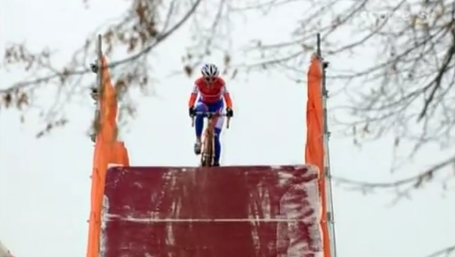 I wouldn’t be surprised to see half the top ten made up of Cervelo riders. Pooley herself? Even if she’s improved her descending over the winter she still has the problem that, whatever Galileo may say, little climbers don’t fall as quickly as bigger riders.

Strong rider strong team number two leads us on to, Marianne Vos (born 13th May 1987, so a belated happy birthday from all here) who must have a great chance of improving on her third position last year. Despite their sponsorship difficulties over the winter, Nederland Bloeit seem to have come through with a stronger line-up than last year with Loes Gunnewijk, Annemiek Van Vleuten and Liesbet de Vocht able to play those oh so essential roles of credible alternative threats.

Will they or won’t they? Whatever has been going on between Doug Ryder, boss of MTN, and Nicole Cooke is starting to make all that Brangelina stuff look simple. Just this morning womenscycling.net tweeted:

It is reported and will be confirmed later that Nicole Cooke will ride with MTN at Tour de LÁude, due to injuries of British team last week

If that’s true, then Nicole deserves to be considered as the third favourite. She’s shown in the past that she can win races by herself, but we’ve also seen, as just a couple of weeks ago in Gracia-Orlova, that she regularly gets turned over by the stronger teams. Earlier this season it looked like she was really developing a good working relationship with the GB girls, but following those unfortunate events in Belgium she now finds herself riding with a group that have limited experience, singly let alone collectively, of riding in Europe.

If we’re talking strong teams, then there aren’t many stronger than HTC-Columbia, but their two riders who might best of all contended the overall, Judith Arndt and Noemi Cantele, aren’t included. Instead they 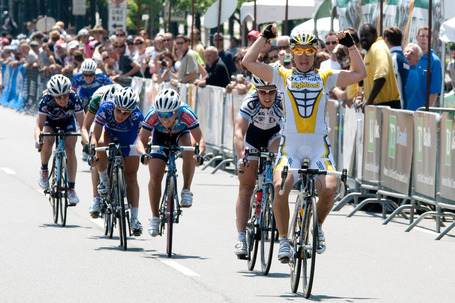 seem to be going for the sprints, with Ina Teutenberg and first choice leadout Chloe Hosking, leaving all their GC hopes on the shoulders of Evelyn Stevens. Teutenberg has in her career already won 18 stages here, and should be able to get a couple more, but Stevens has yet to ride a race this long, and could well suffer one or two of those "jours sans"

Other potential GC contenders include Emma Johansson of Red Sun,

another who tends to have one or two bad days, Ruth Corset of Tibco, Trixi Worack of Noris who is having a quiet season so far, but who has been on the podium here every year for the past six years including a win in 2004.

Those trying to keep up with Teutenberg in the sprints are likely to include Safi Pasta Zara pair Rasa Laleivyte and Inga Cilvinaite, Angela Hennig of Noris and Tibco’s Brooke Miller. The mountains jersey will probably either go to Emma Pooley or Mara Abbott of the USA. Young rider? I think that both Marianne Vos and Regina Bruins are still eligible.

If you don’t like my rundown, then people over at Cicloweb have come up with great piece here or via Google translate.

All photos courtesy Chris Fontecchio, except Claudia Häusler, which is courtesy Cervélo TestTeam.