Share All sharing options for: Giro Gossip! Soap and Water

In this Edition: Soap operas, while sometimes entertaining, are never as good as a bike race.

Who needs soap operas? We’ve got bike racing. And even better than just your average every day bike racing, we’ve got Giro bike racing. This, my friends, is a very good thing. For the Italians not only know how to throw a fabulous bike race, they surely invented polemica. Polemica adds that extra special secret spice to the soup of life. And how about that weather? So swampy.

Apparently, Vinokourov is in the doghouse again. What did he do this time, you may be asking? He makes such a delicious villain this Vinokourov, though his podium beanie looks more jesterish than villainous. Anyway, back to the polemica. It seems that Vinokourov, that Evil Prince of Darkness, should have waited on the road to Montalcino after the crash that took down the race leader Vincenzo Nibali. Surely, you jest. Nibali, Basso, and several others landed in a ditch together after sliding out on wet pavement. The Liquigas riders took their time about getting themselves sorted out and back on their bicycles.

Of course, Nibs wore the Pink Jersey of race leader, which sometimes earns a rider some extra consideration on the road. Sometimes, being the key word there. Indeed, this tradition is honored mostly at the convenience of the race leader’s rivals, and just as frequently ignored. Marc Madiot in one of his anti-radio rants thought that the lead riders hesitated after the crash, and wrongly so. Race your bikes, says Madiot. Cranky, this Frenchman, but he has it right. It’s a bike race, not a book club, and staying upright is part of the game, especially when the weather turns nasty. Cadel Evans, who won the soon-to-be-legendary stage to Montalcino, credited his years as a mountain bike racer for his ability to stay upright on the mud-soaked Strade Bianche. Perhaps the locals could mix up great vats of polenta for the riders to practice their skills for next time. Nibali and friends crashed on regular pavement, pavement made slick by the rain. This is bike racing 101, racing hard on wet roads. Sometimes accidents happen, and sometimes they influence the results. C’est le velo, as Madiot would almost certainly say.

Crashes have also written the story of this Giro for Carlos Sastre. The Cervélo captain crashed hard during the Montalcino stage, and finished more than five minutes behind stage winner Cadel Evans. The following day on the Terminillo climb, Sastre turned his team-mate Xavier Tondo loose to chase a stage result. Tondo couldn’t close the gap to young winner Chris Anker Sorensen, who celebrated his first ever grand tour victory. For Sastre himself, it was another rough day of racing, and he hopes to recover in time to chase some stage glory of his own when the Giro heads to the steep slopes of the Dolomiti next week. In a post-race comment on Monday, Sastre said that his problems came not from his preparation for this Giro, but as a consequence of the bad luck he has suffered along the road. Luck, she is capricious.

What? You want more polemica, you say? Well, it seems that Cunego was not pleased with the unwillingness of his rival teams to help him win the stage on the Terminillo. The Monte Terminillo with its relatively steady gradients had small group sprint written all over it, and Cunego likes nothing better than a small group finish at the top of a climb. Nom nom nom. Not surprisingly, Lampre-Vini Farnese worked the front of the bunch much of the day in hopes of bringing back the breakaway. But no one else wanted to help. Waaa! Asked on Monday why Liquigas didn’t contribute to the chase, Basso said that the hard stage to Montalcino had tired his team. Besides, the finish on the Terminillo didn’t much suit Basso or Nibali, so why bother with all that chasing? I wouldn’t, but nobody asked me. The general classification riders proved content to let the breakaway riders have their fun. Too bad, Damiano, you’ll have to wait for another day.

The limited chasing effort proved good news for Chris Anker Sorensen, who barely made the start of this Giro. Sorensen broke his collarbone just seven weeks ago. On Sunday, he won his first ever grand tour stage on the Terminillo. The young Dane spent the day in the break, before attacking a steep section of the final climb. With less than 3 kilometers to go, he nearly cracked, prompting a member of the Saxo Bank team staff to poke his head through the sunroof of the team car and yell loudly in encouragement. At least, I think it was encouragement. With Xavier Tondo coming up fast from behind him and the bigs beginning to hot up the pace in their own battle of supremacy, Sorensen had no space for weakness. Fortunately he managed to rally. I’m not sure if the team staffer would have survived the experience if he hadn’t. I’m also not sure what Sorensen was doing at the finish line. I hear it had something to do with fishing. Honestly, could you just put your hands in the air and smile pretty for the cameras? These cryptic gestures are just far too much for my feeble brain to decipher. Where’s my secret decoder ring?

It’s been a good few days for the young riders, for sure. Sorensen won his first stage on Sunday, then Matthew Goss won his first ever stage on Monday. Goss threaded his way through a chaotic final sprint that included a cheeky move from World Champion Cadel Evans. The Evans move came as a riposte to an attack from Vinokourov and his team earlier in the stage, which split the field and left Evans in the second group. Thanks to the efforts of Liquigas and Acqua&Sapone, the split proved short-lived. Evans, he isn’t much for polemica, but he does like to play it. In the final kilometer, Evans attacked up the right-hand side, while Vinokourov scrambled to follow. For a short moment, it seemed possible that Evans would take a second stage win. Goss actually came off Vinokurov’s wheel to take the stage victory. Nice lead-out if you can get it.

The young Tasmanian’s win added to the on-going Sprint Saga at HTC-Columbia. The team now boasts three sprinters in Mark Cavendish, André Greipel, and Matthew Goss. Goss started the Giro as lead-out rider to Greipel, but the German has lacked form from the start. If you’re a sprinter, you really really need to be as fast as your lead-out guy. Just helping out. Greipel has not been as fast as Goss during this Giro, and on Monday, Goss decided it was time to ride for himself. The 23 year old explained in his post-race comments, that he decided today he wouldn’t wait for Greipel, he would simply go. It worked. Or, at least, it worked for Goss. Greipel? Not so much. Goss also said he intended to look for more opportunities to ride for his own results. Suck it, André. Is there any more doubt that Greipel is not long for this team? No, no there isn’t. The only question is where Greipel will sign next. For despite his difficulties in this Giro, Greipel does have his share of results, though if you ask Cavendish, he’ll tell you that Greipel’s results only come in the "little shit races." No one ever mistook Cavendish for the Gentleman Sprinter.

Alas for Petacchi, the Gentleman Sprinter left the Giro on the road to the Monte Terminillo on Sunday. Petacchi has suffered from bronchitis since the race began and had hoped to recover well enough to contest a few sprints. No such luck for the 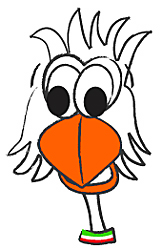 Italian, who coughed and hacked his way through a regretful interview after his departure. Really, nobody does sad like Petacchi. Buck up little camper! No doubt his lovely wife will make him a nice pasta and it’ll all be okay. Maybe she can even help him forget how much he hates France in July.

Tuesday, it should be more sprinty fun. The stage runs from Avellino outside Salerno on the Tirreno. Oh no. Oh yes, they do like their vowels in Italy. The Giro travels across the width of Italy, from west to east. Don’t worry, it’s the skinny bit of the width. The finish line sits just inland from the Adriatic coast in Bitonto. Maybe it'll even stop raining. Really, I thought they were going to have to swim to the finish on Monday. It’s a long stage at 230 kilometers with only one categorized climb just short of kilometer 100. Did I mention there might be a sprint? I do think I did, though it’s always possible that the teams will grow lazy and let the break go to the line. I don’t pretend to predict such things, though I will predict more gossip before too many more days have passed.