Today's stage rolls 113 miles (181 km) south from San Francsico to Santa Cruz which means lots of exposed coastal highway and big onshore winds, and we all know what big onshore winds can mean, right? Echelons, that's what! Probably not actually going to be a factor, but I mention it because "echelons" just happens to be my third favorite word in cycling, right behind "bonifications" and "chamois-cream", which I am counting as one word in this instance because I used a hyphen. Yay punctuation. And speaking of chamois cream, check out DZ giving us a demo on proper application of said unguent during last years ToC. That is solid gold cycling entertainment right there, peoples... Oh the race preview. I forgot... So, long coastal road followed by some medium mountains, followed by a screaming descent into Santa Cruz. And unlike yesterday's deja vu stage, rain is not in the forecast. So a screaming descent is a virtual certainty. And we may actually get to watch it!

Perhaps the only upside of not having any live video coverage for stage 2 is that the stage 3 climbs are pretty much the same as the stage 2 climbs, with one small additional climb, which means you can turn back your clock and party like it's May 17th, 2010. Ah, May 17th. What a crappy day you were. At least you made for a nice podium shot... 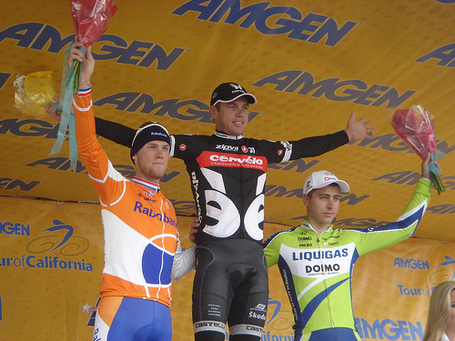 Now, predictions time. My prediction is that Thomas Rabou from Team Type 1, current holder of the KOM jersey, is going to pedal his little orange legs off to keep that jersey, seeing as his mom is battling cancer back home in Holland, and Thomas wants to make her proud of him. All true. Heard him say it with my own ears. I, for one, am going to be cheering for him. Seriously, how can you not cheer for a guy who wants to make his sick mom proud? My other prediction is that Levi is going to try to escape on the Bonny Doon climb, again, and that Jens is not going to let the wee man succeed. Also, I predict that Lance will not win this stage.

Williams Wheels video of the climbs

DZ getting a massage