In this edition: The new normal and a bout of fisticuffs.

The Giro d’Italia heads into the mountains this weekend. "Now the real Giro begins," to borrow a line from Gilberto Simoni. What? After the rain-drenched stages to Montalcino and l’Aquila, we still haven’t seen the real Giro? In the normal way of things this final week of racing through the high mountains would bring a show-down among the bigs. But after Wednesday’s toppling of the chessboard on the wet roads to l’Aquila, normal is not really normal any more.

Thursday’s stage demonstrated just how unpredictable this Giro has become. On paper, it looked like a routine sprint stage. The usual early break of three riders went up the road and pedaled along while the rest of us enjoyed the passing scenery. Everyone knew that a climb came near the end of the stage, but it wasn’t anything special and a long, flat run-in to the finish offered the sprinters plenty of room to bring back any cheeky escapes. A sprint seemed all but inevitable.

Not so fast. On the final climb, an attack from the main field went clear. The group included ex-bigs like Ivan Basso, Vincenzo Nibali, Alexandre Vinokourov, Stefano Garzelli, Michele Scarponi, and Damiano Cunego. Feisty, these ex-general classification leaders. Hunting a stage victory, Filippo Pozzato also joined the group, and the escape had legs. They soon had a gap over the main field where Caisse d’Epargne, Sky, and Cervélo hastened to chase. Garmin helped, though the team of sprinter Tyler Farrar, had mostly burned their legs earlier in the stage. The gap never grew too large, but the stage suddenly became anything but routine.

Cadel Evans is a nervy bike racer. The best stage racers are tranquilo to the point of somnolence. They aren’t much bothered by anything. It’s a waste of energy anyway. But tranquilo is beyond the reach of Evans. Seeing the break go up the road without him, well, this proved too much for the fragile calm of Evans. He went to the front and got down to chasing, determined to keep the ex-bigs from gaining any time on him. It was all a bit surreal, really, as if everyone had forgotten that they were all sitting well out of the race lead. You have to fight for it, anyway.

Lampre and Liquigas, with riders in the break, decided they didn’t want the chase to work too well. Both teams began to interfere with the chase, by infiltrating the line-up at the front. Interfering with the chase is a always a delicate art. Some riders do it well, some don’t. In the smooth version, a rider joins the chase line-up without crossing wheels or punching anyone in the face. Then when it’s his turn on the front, he pulls more slowly than the average speed. Wash, rinse, repeat. The more aggressive version involves swerving, bumping elbows, and outright blocking. Frequently, this tactic leads to angry words and flying fists.

Just ask Daniele Righi. Righi wanted to protect the lead of Cunego, and in the main, he didn’t do too badly with his efforts to infiltrate the chase. His mistake was to get in the way of World Champion Cadel Evans in a moment when Evans had that not-so-tranquilo feeling. As the road curved, Righi slowed, momentarily blocking Evans. Evans, he was angry. Coming up next to Righi, the Australian grabbed the Lampre rider’s jersey. Then, Evans started pummeling Righi with his fists. Hopefully, the bike racing continues to work out for Evans, because he would never make it as a prize fighter. And seriously, you do not want Evans as your side-kick in a bar fight. Total doom. So the field is rolling along quite quickly, and Evans is pounding on Righi. Evans brah, you’re losing your shit. 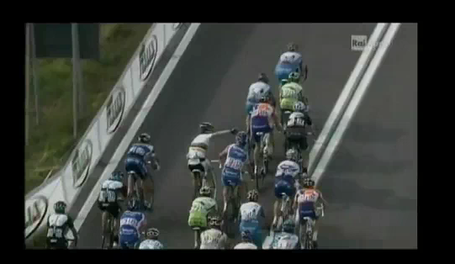 Tranquilo, tranquilo. Even from the heli shot, Righi’s responding gesture required no translation. Vaffanculo! Finally, Evans seemed to realize he was in the middle of a bike race, and really, if he wanted to chase down the break, he needed to stop fighting with Righi and get on with it. Which he did. (To see the whole sorry saga, click the picy ---> )

At the finish, the break held some paltry amount of seconds over the main field. Oh Cadel, you lost your shit over 10 seconds? When you’re 10 minutes out of the race lead? Aye carrumba. Filippo Pozzato won the sprint from the gruppo ristretto. Ristretto is one of my favorite words, because it makes me think of espresso. Mmm, espresso. Right, anyway, Pozzato won the stage and gave the Italians their very first stage win of this Giro. Phew, that was getting worrisome. Pozzato said it was a dream come true to win a Giro stage in the Tricolore, the jersey of the Italian National Champion. As for Evans and Righi, they both received fines for their bout of fisticuffs. Bike racers, they really should stick to pedaling. Davide Cassani commented after the stage that Evans could have been disqualified from the race, but it hardly seems likely that the Italians would wish to throw the World Champion out of their race, especially after his hardman’s win at Montalcino. Friday, Evans and Righi shook hands on camera. Evans had the last word: Not bad for a rider who never attacks, eh?

Though the Italians had begun to worry over their shocking lack of wins in this Giro, Friday’s stage added a second victory to the tally. Local boy Manuel Belletti won one for the home team. Belletti gets tranquilo. The Italian waited patiently in the break while the others burned their legs. Someone really needs to help Iban Mayoz with small group tactics. Here’s some free advice: Don’t chase everything the moves. American Craig Lewis took a flyer in the last kilometer that nearly worked. Cameron Meyer must surely be wishing he’d had the legs to clear his wheel, since instead of jumping away, he managed to lead out the sprint behind Lewis. A live and learn moment for Meyer. Belletti benefitted from the Garmin rider’s effort and easily won the sprint. It was Belletti’s second ever professional victory, a Giro stage won in his home town. Little wonder he cried from the podium.

It was also Pantani day at the Giro, as the stage finished in il Pirata’s home town of Cesenatico. This meant lots of video montage, so that we could all relive the best moments of Pantani’s career. Stefano Garzelli dutifully played his part, recounting his career with Pantani. Marco was my idol, said Garzelli fixing his baby blues earnestly at the camera. He’s a good sport, Stefano, and he repeats the story year after year. The crowd waved their pirate flags, and everyone said nice things. Funny, they never ask Simoni what he thinks of Pantani.

Now, the Giro heads to the mountains. Saturday, the Monte Grappa summits with 40 kilometers to race. It should hurt the legs, but not explode the race. Since we’re way past normal in this Giro, don’t bet the house on that prediction. Sunday comes the Monte Zoncolon, the climb which only Gilberto Simoni has won. It’s a steep, ugly thing, and so many riders have nothing left to lose. Thursday’s escape of the ex-bigs showed just how restless riders like Ivan Basso, Alexandre Vinokourov, and Damiano

Cunego are with the current state of things. It’s impossible to believe that there will be no attacking on the Zoncolon.

On the intriguing subplot front, Liquigas has the biggest dilemma of the bike race. For the other ex-bigs, the way is clear. Attack early and often. And for the riders ensconced high in the general classification, the way is also clear. Resist, and if possible, attack. But then there’s Liquigas, that poor train wreck of a team who came to the Giro to win it. Sure, they have two good riders in the top ten in Kisenovski and Agnoli. But they also have two big, ambitious riders sitting eleven minutes out of the Maglia Rosa, a jersey both Basso and Nibali coveted. Basso riding as gregario to Agnoli? I hardly think so. Almost, I feel sorry for Amadio, but he made his fate as we all do.

Watch for more Gossip on Monday, the rest day. In the meantime, we have mountains. It’s rare to have such an unpredictable grand tour. Enjoy it while it lasts!