In this edition: There will be suffering.

The waiting is over, the sprinters have had their final chance to play, it’s on to the high mountains and the finale of this year’s Giro d’Italia. Could this race have been any more fun? I’m having a hard time imagining how. Really, I’d like it to go on forever, but that might be too much of a good thing. Also, the riders would get tired, and apparently, that would be bad. So, we will have to content ourselves with three more days of Giro. And what a three more days it will be. Savor it, my friends, the Giro only comes once a year.

Am I the only one who is a little sad to hear the words "final sprint stage of this Giro?" What? It’s almost over? Well, no doubt a few of the sprinters are, you know, the ones who didn’t win anything. André Griepel had a narrow escape this Giro, and very nearly went home empty-handed. The German came into the Giro feeling under the weather, and struggled to find his legs in the opening stages. He watched as his lead-out Matthew Goss out-rode him and celebrated victory. Finally after surviving the mountains and the two and half weeks of hard racing, Greipel finished first. The win must come as something of a relief to the German, though everyone knows that the Giro is just one of those "little shit races" anyway. Cavendish still looks likely to lead HTC-Columbia at the Tour, but Greipel has increased his chances of finding a new team for next year. Waiting is hard.

But basta with these sprinters and their petty problems. We have mountains, very large mountains. Tomorrow’s stage climbs the Aprica not once, but twice. It also includes the Trevigno, which isn’t what you’d call easy at 11 kilometers, 7.6% average gradient. The Trevigno includes a section of 14%, just for funsies. Warning! The descent off the Trevigno is very fast and technical. Technical descending, Basso’s favorite. Maybe the blue hat will give him secret super powers.

Directly following the descent from the Trevigno comes the ascent of the Mortirolo. The Mortirolo is one of those beastly climbs, long, steep. The average is a measly 10%, nothing to worry about there. No, really. Maximum gradient? 18%. Kid you not. The final switchbacks to the summit wall up so steeply as to block out the sky. The final kilometer lasts forever on the Mortirolo. The descent down the north side of the Mortirolo is a tricky business. Finally, it’s back up the Aprica, a 14 kilometer climb. The Aprica is relatively gradual for much of its span, except for 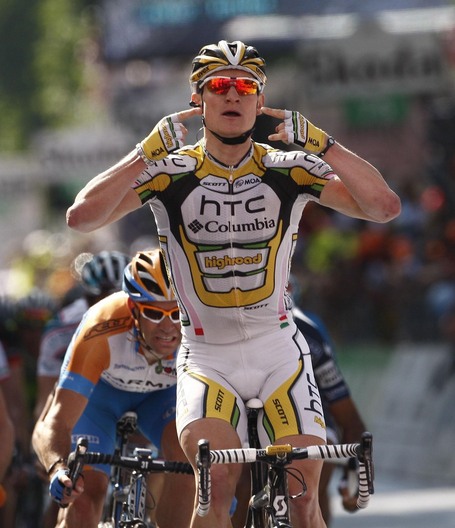 the 15% bit. The steep section of the Aprica is near the bottom, and the gradients relax as the finish line approaches. I’m not sure anyone will notice by then, for there is nothing easy about the profile of this stage.

Last time Basso raced on the Mortirolo, he escaped on the climb with Gilberto Simoni. Simoni, no slouch when it comes to descending, claimed later that the two made a deal at the top of the Mortirolo. Simoni would wait on the descent, Basso would not sprint at the stage finish. Well, that worked out well, as we all remember. Basso attacked Simoni on the final climb and won the stage solo. Gibo, he had the last laugh, and called out Basso as a doper on live television. Ooh là là, I could smell the tension from here in Cali. Simoni also later disparaged Basso’s bike handling, saying that the Smiling Assassin descended like a sack of potatos.

Hopefully, Basso has learned from the mistakes of the past. Drugs are bad, mmkay? Also, it’s a bad idea to make a deal on the road, if you’re not actually going to honor it. Such things lead to bad feelings and name calling. Not that I ever object to a little name-calling on live teevee, mind you. It does add that extra zesty goodness to the proceedings. And Basso will need his best descending skills. The Mortirolo is a tricky descent. So too is the Trevigno. Weather reports predict dry roads for tomorrow, which is about the only easy news about this stage.

Evans and Basso have traded off mountain stages in recent days. Basso got the best of Evans by 1:19 on the Zoncolan, while Evans took back 30 seconds on the Plan de Corones. Thirty-six seconds separates the two riders in the general classification. Of course, to win the Giro, they both must find a way to dislodge David Arroyo who still leads Basso by 2:27 and Evans by 3:09. Though he conceded time over the past two mountain stages, Arroyo clings barnacle tight to the Maglia Rosa. The Spanish climber also has a strong team to defend his hopes. Evans must surely be envious. No doubt Liquigas will have a plan. Hopefully for them, it won’t turn out like that l’Aquila thing did.

Looking further down the classification, Carlos Sastre is at 4:41, which puts him 2:20 behind Basso and 1:32 behind Evans. Unless he suddenly finds good legs, he is unlikely to overtake Basso or Evans, though stranger things have happened in this Giro loco. Vincenzo Nibali sits sixth at 4:53, and is likely to play the team rider for Basso. Nibali got to play in Asolo and got his stage victory. Now, it’s time to work.

On the subject of Liquigas, the sponsor has decided to continue its support for the team for two more years. Apparently, the company considered ending their involvement after the Pellizotti news broke, but have since decided to continue. Both Basso and Nibali have contracts for the next two years with the team. The collabo between the two Italians has run notably smooth this Giro, with few obvious signs of tension. Nibali is an ambitious rider, who has not hid his impatience. At the same time, Basso is plainly on good form in this Giro, and seems not to be the sort of rider to inspire backstabbing. Just ask Simoni. Joking! Anyway, at least for now, Nibali looks likely to play his role, just as he did on the finishing climb at Pejo Terme where he rode tempo for Basso in the finale. Press reports also suggest that Nibali may skip this year’s Tour de France, where Basso will lead the team, and take on the Vuelta a España for a high overall finish.

But the Vuelta, that’s like forever from now. Tomorrow we have a big mountain

stage, and a close general classification battle. Little wonder that Italian television is showing the stage from end to end. No, my friends, I will not be watching the entire stage. A girl has to sleep, you know.

There are always a thousand scenarios for a mountain stage like this one. But more often than not, turns out to be a rather simple business as the succession of mountains do the work of whittling down the field until only the strongest riders survive. Though largely out of the general classification battle, both Michele Scarponi and Damiano Cunego have shown good climbing legs in recent days. Either could prove a useful ally to Basso or Evans in a play for the overall. They are the jokers, these two Italians. Alexandre Vinokourov in seventh at 5:12 would have to do something crazy to ride back into the Pink Jersey race. With mountains like these, crazy doesn’t seem totally out of the question.

If tomorrow’s stage isn’t enough for you, Saturday brings the Passo di Gavia with a finish on the summit of the Passo Tonale. Weather reports are iffy for the Gavia. Snow and wind, and there is some concern about the descent if the weather is poor. Just ask Bruekink how fun that descent can be in bad weather. The organizers have drawn up an alternative stage, that includes an ascent of the north side of the Mortirolo, which the race descends on Friday. Everyone will be hoping that the back-up plan proves unnecessary. For those who would like to play along at home, La Gazzetta has a list of webcams for the mountains.

Tomorrow, we will have bike racing! Such a Giro it has been so far, and it’s far from over just yet. That’s all from me for now. I’ll be back tomorrow afternoon for more chitty chat.

Thanks to the FigureHead for the Podicci with Hat graphic. Griepel photo is courtesy Giro d'Italia. Thanks Giro press people.