Today was one for the history books. A legendary course featuring the Mortirolo turned into an even bigger legend when the backside of the climb became the focus of the day, as David Arroyo overturned most of a two minute deficit to Ivan Basso and his compatriots with a nerve-thrashing descent that appeared to save his maglia rosa, possibly for good. But Basso, Vincenzo Nibali and Michele Scarponi saved something for the uphill ride to Aprica, turning 30" into 2.30 by the end of the race. Also notable was the rather blatant deal cut between Liquigas and Scarponi's Androni team. Following a 15% wall, the ride to Aprica isn't very steep, and Scarponi wasn't working with the LIQ boys who were in team crono mode. Then suddenly he started working... and the gap ballooned over the chasing group of notables Arroyo, Evans, Vinokourov, etc., who simply couldn't mount an effective or organized chase. Basso literally led out Scarponi for the stage win, erasing any doubt about the deal, though I say this with some admiration, as such deals are an indelible feature of cycling lore to the point where NOT cutting one today with Scarponi would have been insane. The Giro isn't over yet, but chances are today was the big move. Results:

Pic of the day? Grinta! 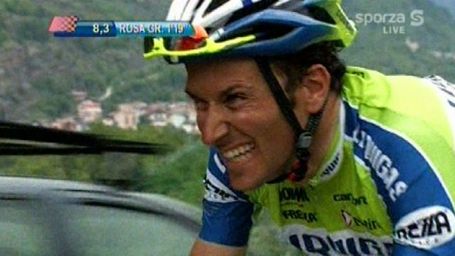