Share All sharing options for: The Mortirolo Plays King-Maker, Tomorrow It's Gavia Day

I think it was the hat. Ivan Basso today rode into the Pink Jersey with the help of a few friends. Vincenzo Nibali, stiletto sideburns aside, rode perfectly in support of Basso’s ambitions, and his own. For Nibali now sits third in the general classification, a very nice prize for the young rider from Sicilia. Michele Scarponi also proved a friend to Basso today, as he too contributed to the effort that pulled Basso into the race lead. Scarponi received his reward at the finish and celebrated his first stage victory of this Giro. Scarponi also now sits fourth in the general classification 2:49 behind Basso and 1:11 ahead of fifth placed Cadel Evans.

The Passo di Mortirolo played king-maker today, as Liquigas predictably turned the screws as the road pitched up. Soon, Basso, Nibali, Scarponi had ridden clear, though Cadel Evans fought a desperate battle to stay with the leading group. He’d drop back, then scramble back on, then, drop back again. Finally, the end came for Evans, though he never conceded the day. Basso, doing much of the work on the climb, set a torrid tempo. His rivals could only watch through fatigue crossed eyes as the bike race went up the road. Relentlessly Basso reeled in Stefano Garzelli, who had gone adventuring on the Trivigno in the hope of chasing stage victory and climbing the general classification. It was not to be for Garzelli, not with Basso chasing overall victory.

Behind, David Arroyo rode steadily, hoping against hope to defend the race lead. He had help from team-mate Rigoberto Uran for a time, though Uran soon dropped back and Arroyo fought on alone. Trailing by 1:30 at the top of the Mortirolo, the Caisse d’Epargne rider looked to have lost the Giro. But Arroyo wasn’t finished just yet. With the race lead in play, the Spanish rider flew down the descent, displaying acrobatic bike handling as the road twisted and turned, its off-camber corners wet from the rain. Bravo Arroyo! For this is the way to win a bike race. Just how difficult was the descent? Cadel Evans nearly lost it all, as he overshot a corner, rode into the dirt, and passed within millimeters of a parked camper van. Up ahead, Basso played it safe, while his team-mate Vincenzo Nibali, a brilliant descender, rode easy and waited for his team leader. It was perfect team riding from Liquigas, and Nibali in particular. As they rode into Edolo, the gap stood at 30 seconds between Arroyo and Basso. The wet descent diluted Basso’s advantage. Still, the Giro remained in the balance.

All too soon for Arroyo, the road turned up again, as they passed through Edolo and turned on to the Passo Aprica. The Aprica cruelly starts out harder than it intends to go on, and immediately, the gaps began to stretch out again. Up front, Nibali, Scarponi, and Basso worked together, Basso chasing the Pink Jersey, Scarponi, the stage victory. Was there an explicit agreement that Scarponi would contribute in exchange for the stage win? It’s hard to say, as in this instance, the interests of each rider were quite clear. Obviously, Scarponi sought stage victory, while equally obviously Basso wanted the Giro. Collaboration on the road certainly made sense.

Behind the leading threesome, a chase group of five formed with Arroyo, Cadel Evans, Carlos Sastre, John Gadret, and Alexandre Vinokourov. Vinokourov doesn’t play well with others, but lacked the legs to go on his own. The climb turned into something of a death march, as Sastre, Evans, and Arroyo did most of the work. Gadret and Vinokourov seemed not to have much left at all. The chase looked ragged, the riders worn down by the beastly inclines of the Mortirolo and the cold, wet descent. There’s not much tactics to a chase like this one turned out to be. Everyone survives as they can and gets what time they may. Surely, all in the chase had reached their limits.

At the finish, Nibali led inside the final kilometer, then Basso took over. Scarponi sat in second wheel, and jumped easily away from Basso, who continued a hard tempo to the line. With the general classification in play, there was no time for 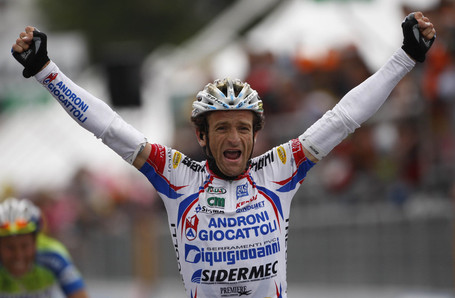 games. Nibali didn’t sprint, allowing Basso to take the time bonus for second. It’s never bad to have a few extra seconds in the back pocket. It seems likely that the leading had made an agreement as to how the stage would end. But can anyone really say that Scarponi did not earn his stage victory? I certainly can’t.

Now, the waiting began, as back down the Passo Aprica, Arroyo still fought for his race lead. He wanted this Pink Jersey, Arroyo did. But the clock had turned against him, the seconds turning to minutes, and soon the jersey had slipped from his grasp. At the line, Vinokourov took the sprint for fourth, followed by Gadret. The two had contributed the least to the chase, and opened a small gap at the line. Evans crossed sixth, then Arroyo, and finally Sastre. Arroyo conceded just over three minutes to Basso, the new race leader. As Basso waited for the podium presentation, Arroyo turned around and rode back down the Passo Aprica. The cameras briefly turned his way as he disappeared into the distance, waving to acknowledge the applause of the crowd.

The general classification turned over again. Now, Ivan Basso leads the Giro d’Italia for the first time in four years. Four years ago, he won the stage on the Aprica, then forfeited the next two years to his involvement with the blood doping Dr. Fuentes. This time, Basso didn’t contest the stage victory, content to take his race lead. Maybe it’s possible to learn from the past. David Arroyo, meanwhile, still holds second in the general classification, 51 seconds behind Basso. Vincenzo Nibali rode into third at 2:30, while Michele Scarponi rose to fourth at 2:49. For Liquigas, today’s friend may well become tomorrow’s enemy. Cadel Evans dropped to fifth at 4:00 and Carlos Sastre sits sixth at 5:32. Richie Porte! The young Tasmanian is seventh at 6:00 after a stellar ride through the mountains. Stellar, because this Giro marks his first ever grand tour.

Tomorrow, the Giro climbs some more, because we still haven’t had enough climbing. More is better. The Cima Coppi, the highest peak, of this year’s Giro sits at the summit of the Passo di Gavia at 2618 meters above sea level. That’s mighty high for a bike race. As of this writing, the roads are clear, though snow banks will tower up to 3 meters over the riders. And there could still be bad weather, including wind and snow.

It’s a day of climbing to get to the climb, tomorrow as the stage rolls out from Bormio. After the brief descent, the first climb of the day looms. The Forcola di Livigno climbs for 18 kilometers at an average gradient of 7%. It includes a section at 13%, and the summit perches at 2315 above sea level. 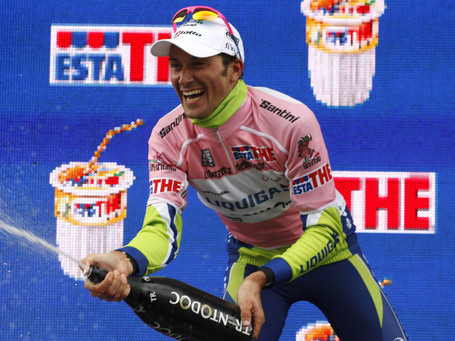 Nothing easy about that thing, really. After a short descent, two climbs follow in rapid succession, the Passo di Eire and the Passo di Foscagno. Then, it’s a long descent as the race passes back through Bormio on the way to the Passo di Gavia.

A monumental climb, this Passo di Gavia, it climbs for 24.9 kilometers. It’s not overly steep, with an average gradient of 5.6%, but the Gavia is long and the elevation is high, by the standards of the European passes. The Giro first climbed the Passo di Gavia in 1960. Charly Gaul won the stage, though Imerio Massignan summitted first. The climb starts out gently enough, and the first six kilometers are nearly flat. But soon the real climbing begins, and the road tilts up to 9%. It’s a hard grind from there, as the gradients settle into the 6-8% range. Around kilometer 21, a brief section walls up to 11%, which won’t tickle. As it passes through the Rifugio Berni with four kilometers to go, the road relaxes and it’s a gradient climb to the summit. Of course, as we saw today, the descent also has something to say in the outcome. The descent off the Gavia is sinuous, the road narrow and the surface poor. Run-off from the snow may well make the corners treacherous on the lower slopes.

And there’s the weather. Early forecasts called for wind and snow, and there was some talk of changing the route. As of now, the route remains unchanged. In 1988, the Giro d’Italia raced over the pass in a blinding snow storm. Johan van der Velde crested the summit first. Suffering desperately from the cold, the Dutch climber could not go on, and stopped to warm himself in the team car. Farther down the climb, American Andy Hampsten chased the Pink Jersey with Erik Breukink not far behind him. Breukink caught Hampsten on the 18 kilometer descent and went on the to win the stage. Hampsten captured the Maglia Rosa, and a prominent place in the Giro’s story. The American climber won that year’s Giro d’Italia, the only grand tour victory of his career.

This year’s stage does not end with the Passo di Gavia, and it’s one more mountain top finish for this Giro d’Italia. Directly after the descent off the Gavia, the riders turn on to the Passo Tonale for 12 more kilometers of uphill racing. The Passo Tonale has an average gradient of 5.2% and boasts a maximum gradient of 10%. Though smaller in stature than the Passo di Gavia, the Tonale is no jaunt around the park. It’s a finish for the climbers, and for the survivors, tomorrow.

Liquigas showed today that they have this race well in hand, and it will take a big effort to dislodge Ivan Basso and Vincenzo Nibali from their top spots in the general classification. Can David Arroyo hold on to a podium finish? If so, he will certainly have earned it with his stalwart defense through the mountains. Michele Scarponi will give him a run for it, though, as the Italian is plainly on the ascent in this Giro. Evans and Sastre, meanwhile, face a tall order to move up the overall, as both seem to have ridden their legs into the ground to make it this far. Still, with so much climbing yet to race, a reshuffling of the classification is not entirely out of the question. After the long, strange trip we’ve had this Giro, I certainly wouldn’t bet against the unexpected.