(featuring a little not really preview any more discussion of the Tour of Chongming Island). After a rather hectic last week, things quieten down a bit with only one race, or rather series of races, on the calendar to attract the international peloton: the Tour of Chongming Island. Ever since 2001 Chongming has been holding races for the women’s peloton. For the past few years they have had a time trial followed by a four day stage race, but this year the stage race has been cut back to three days and a one day race that forms part of the World Cup series added, a sign that they would like to be considered an equal to the Fleche Wallonne and Plouay. Will the teams and the spectators see it that way? I certainly hope so, but however enthusiastic and well prepared the organisers are, it’s the course that makes the race. When you look at the basic raw material, the landscape, those organisers will have have to use every drop of ingenuity they possess to come up with something memorable.

Chongming is an island in the Yangtze delta in the Chinese province of Shanghai formed by alluvial deposits. Don’t think that it’s a Huckleberry Finn sort of island, though, it covers over 1000sq km and has a population of almost 700,000 people. So it should be big enough to fit a race on. The problem word, however, is alluvial. That means that it’s formed from mud, muck and other stuff washed from the river banks higher up. There’s no shame in that - so was Venice – but alluvial islands tend to be flat. Very flat. By contrast Drenthe looks positively mountainous. So it’s almost inevitable that these races will end in a bunch sprint. But even so, what tricks have the organisers pulled out to give any breaks a feeling of hope, rather than the certainty of inevitable doom? Well have a look at the courses for the 3 day Tour of Chongming Island: 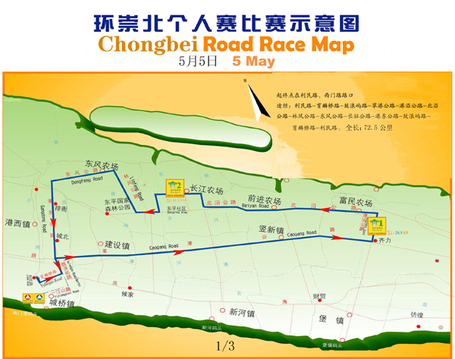 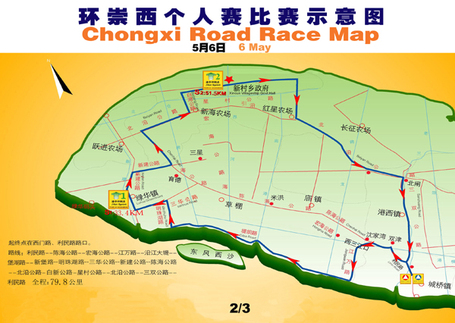 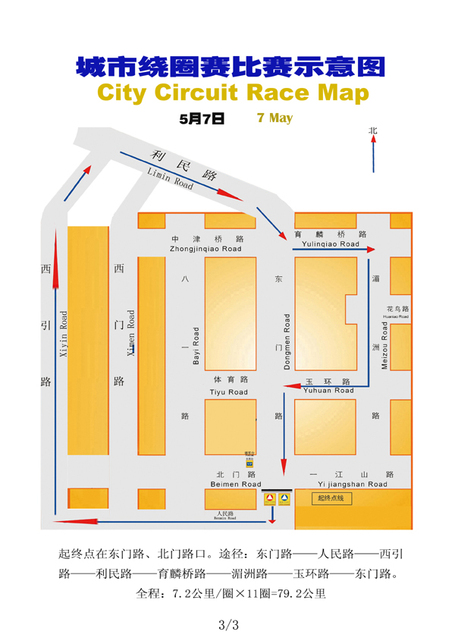 Personally I find that awfully short. For comparison, the last stage of the junior Omloop von Borsele was 71km. And in totally flat races like this or the Tour of Qatar the bonus seconds on offer at the intermediate sprints really do make a diference to the placings, so it’s pretty much guaranteed that the top sprinters’ teams will let no breaks escape, ever. At the time I’m writing this the first two stages have already finished. Ina Teutenberg beat Kirsten Wild in the first, then places were swopped in the second. Korean rider Choi Hye Kyeong took third place on stage 1, but otherwise the minor places include the familiar names of Rochelle Gilmore (here riding for Australia), Angela Hennig and Alessandre d’Ettorre (beaten on both stages by her young teammate Marta Tagliaferro, who also managed 7th place in the GP Liberazione a couple of weeks ago. D’Ettorre had some sort of mechanical on stage 1 here and lost over two minutes, so the stage 2 result may have been a team tactical decision). Stage 3 results may be through before many of you read this.

Ok so the Tour of Chongming Island may look a bit underwhelming, but Sunday’s World Cup races promises something a bit more spectacular. 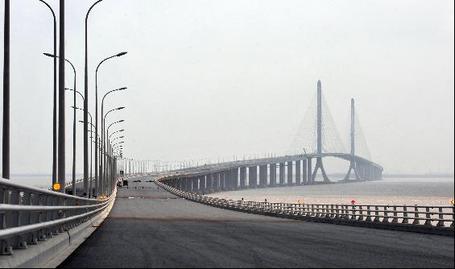 That’s the Shanghai Yangtze river bridge, a 10km six-lane road bridge that leads to an 9km tunnel that leads to Shanghai proper. It was only opened last November, yet already they are prepared to shut it for a couple of hours to spice up a bike race. That makes it a bit more interesting. Add to that the possibility of winds and we could well see echelons where a rider who tries to squeeze in where there isn’t a space won’t end up in a Dutch ditch, but in the Yangtze. A real devil-take-the-hindmost race. Here’s the full circuit. 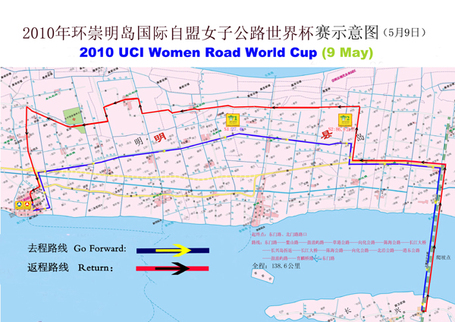 I hope that the insistence on starting and finishing in Chengqiao doesn’t give too much time for the race to come back together again, because the bridge really gives the race a unique feature and doesn’t deserve to be wasted. The full race distance is 138km, and I’m not sure from the map whether that means one or two laps. Like the earlier stage race,this is one for the sprinters, and most teams have left their climby types back in Europe preparing for the Tour de L’Aude. Apart from the names I’ve mentioned above, maybe keep an eye out for Giant rider Gao Min who’s had a couple of respectable placings against similar fields in the past, although right now respectable for local riders means in the top ten.