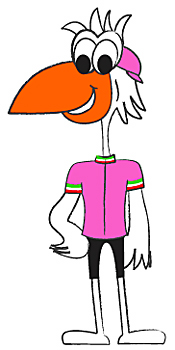 Not much analysis to offer -- there was a time trial, and an annoying guy went faster than everyone else. Rain earlier in the day may have cost Brent Bookwalter a great victory, as he finished a mere 2" back of Brad Wiggins, who got to ride on a less slick surface. Makes a difference in a tight, urban course. Who can say?

Among the favorites, guys like Evans, Nibali, Vinokourov and Basso held up their end of things very well, staying out of pink but not conceding anything of note. Sastre did his usual not bad/not great opening ITT. Off the top of my head, only Pozzovivo (caduta) could be said to have had a poor start, but those 30" or so won't mean much in the mountains. And Greipel was 18" back, just enough to take the jersey with a sprint win and 20" bonus. Your top ten:

And your screencappo giornale... since I'm not a Wiggy fan let's go with the Wolf Marmot Squirrel Helmet. 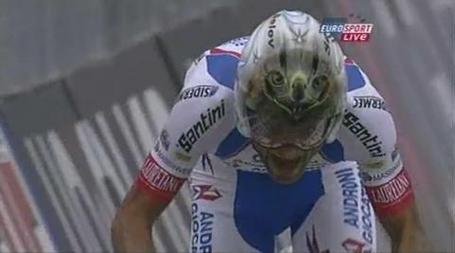