What?! It’s over?! Yes, the Giro has come to an end for another year. But don’t be sad, we’ll get to do it all over again next year. In the meantime, here are a few last words on this year’s Giro.

Rarely does every stage of a grand tour bring the excitement. There are always stages that simply serve to get the race from one place to another. This Giro proved the exception as few stages followed anything like an expected formula. On the road to Brescia during the final week, a break went up the road, the sprinters teams chased it back with 5 kilometers to go, and a sprinter won. That day offered one of the few predictable days of racing. The first mountain stage finishing on the Monte Terminillo also fizzled rather than frothed, as the bigs proved more interested in saving their legs than chasing stage victory. No matter, the sight of Chris Anker Sorensen suffered through those final kilometers and celebrating his first ever stage win more than made up for the lack of fireworks behind him.

The big split on the road to l’Aquila proved the hinge of this year’s Giro d’Italia, and probably the oddest day of bike racing we’ve seen in some time. Time melted in the driving rain, the strange story of the race rendered even more obscure by the rain-clouded lenses, the riders, impossible to identify, shadow puppets in the storm. Afterwards, the team managers all claimed they didn’t know, couldn’t tell who was in the breakaway, couldn’t decide that they needed to chase. The excuses all rang a bit weak, since it’s hard to imagine how anyone fails to notice when one third of the race rides away. Riding to make your rivals lose can sometimes boomerang to your own defeat.

For David Arroyo, the road to Aquila offered a chance of a lifetime, a chance that he seized and held tightly. When the race hit the steep slopes of the Zoncolan, it was clear his days as race leader were numbered, though still he never conceded. His mad descent off the Mortirolo on wet roads defied the stranglehold Liquigas sought to impose on the race. Against the Liquigas Goliath, David Arroyo had few weapons, but certainly he pushed his talents to their limits. Only on the final mountain stage did Arroyo seem to concede, though perhaps fatigue had by then ruled out any further heroics. With graveled corners and snow run-off, the narrow chute down the Gavia turned treacherous indeed. It’s hard to fault Arroyo for declining to dance with that particular devil.

Still not a complete rider, this Ivan Basso, he finds little to like when the road turns downhill. Caution isn’t all bad in a stage racer. You must stay upright to win. But the contrast between Basso and his team-mate Vincenzo Nibali suggested that despite his matinée idol looks and perfect family portrait (soon to number five), Basso’s days at the top may be numbered. Nibali played his role to perfection, taking 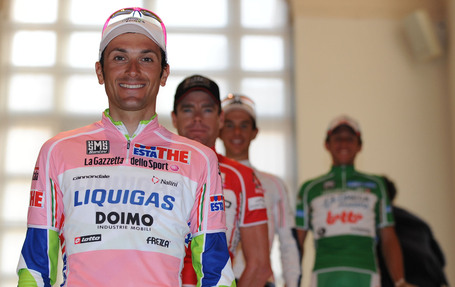 his stage win in Asolo, but waiting on the descent off the Mortirolo when it mattered. The potential rivalry between the two Liquigas leaders never materialized. One wonders exactly what incentive the team offered Nibali in return for his loyalty. Certainly, Nibali is a big rider for the future.

On the subject of young riders, this Giro offered a showcase of up and coming stars. The young Tasmanian Richie Porte smiled in the spotlight, several days the race leader. Porte finished his first grand tour in the top ten and took home the White Jersey of best young rider. Already, comparisons between Porte and World Champion Cadel Evans have emerged in the media, who always seek the next big star. It’s too soon to say how far Porte will go, but certainly with this Giro, he’s started out well. An exuberant Matthew Lloyd, meanwhile, took home the green jersey of mountains leader. He conceded the jersey briefly to Ivan Basso before wresting it away from the race leader. Chris Anker Sorensen, whose pain face has few rivals, won on the Terminillo and rode loyally in Porte’s defense. Criticized early for sending such a young team to the Giro, Saxo Bank showed well in the end. Matthew Goss and Manuel Belletti also took home their first stage victories.

This Giro also looked back, as Gilberto Simoni ended his career with one last lap around Italy. In Trento, he celebrated with his tifosi, and on the summit of the Zoncolan, he sat up at the finish, and crossed the line with a smile. On the final day in the mountains, Simoni attacked on the Gavia in pursuit of the Cima Coppi. Johan Tschopp outsprinted Gibo for the prize to the dismay of some of his fans. But really, after the career Simoni has had, he hardly needed a freebie. Better for Tschopp, who hasn’t won all that often, to have his moment of glory. On the passo Tonale, Simoni sat up, and dropped back for an interview, waving arriverderci to the race and to his long career at the front in the high mountains. I’m not sure why he rode the Verona time trial in a shirt and tie, but it was fun anyway. Thanks for the show, Gibo, we’ll miss you.

My favorite day from this year’s Giro came on the road to Montalcino. Some observers complained that a stage like this one with its bad weather and muddy roads had no place in a grand tour. But what better place for a hard-man’s race than a grand tour, really? Cycling should not be all sunshine and podium kisses. The wheels nearly came off it for Liquigas on the strade bianche, which weren’t so bianche at all. Nibali, in the pink jersey, crashed, Basso waited, and together they chased after the race, which sped away from them. Twice Liquigas nearly lost this Giro: Once on the road to Montalcino, once on the road to l’Aquila. Only their strength - and their rival teams’ weaknesses - allowed them to recover.

Up ahead, World Champion Cadel Evans and Alexandre Vinokourov fought a desperate duel for dominance, which at the time seemed more significant than it turned out to be. By Verona, it was hard to remember that Vinokourov looked very much like a Giro d’Italia winner. Not far behind the Evans-Vinokourov duo, Damiano Cunego showed glimpses of his classics pedigree, which seems to reveal itself every once in a while, though not with any reliability. Evans nearly lost it in the final corner, but with a dead-straight sprint for the line, the World Champion took out the stage victory. The sometimes irascible Australian won quite a few hearts with his ride in Montalcino. In Verona, the media voted Evans their favorite. It wasn’t the award he wanted, of course, but there was much to admire in the way Evans rode this Giro. An illness after the stage to l’Aquila may have sapped his strength, but not his determination. One of the many what if’s of this year’s Giro.

Now, we speed toward cycling’s high summer, and the flat farmlands, brilliant sunflowers, and mountain passes of France. Yellow is the color of summer in cycling. It’s just over a month yet to go until the Tour de France, and next week begins the Tour’s traditional prelude, the Critérium Dauphiné Libéré. There, the July contenders prepare for the big show and play their games of bluff and counter-bluff. Who me? I’m not here to win, I’m just training. And on it goes. 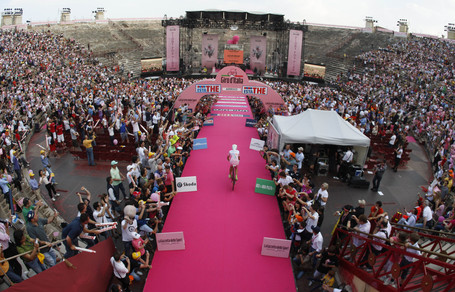