[Yes, I know the book was released two years ago in the U.K., but it's just come across my desk. Also, this week is the 20th anniversary of Millar's victory in the 1990 Dauphine Libere.]

Author Richard Moore has a story to tell -- his own. 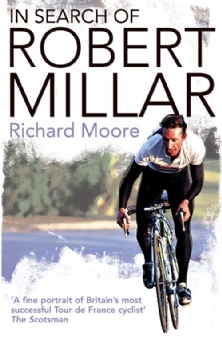 It begins in 1984, when as a pre-teen newly arrived in England from his Scottish roots Moore flips on the TV and is awestruck by the sight of fellow Scot Robert Millar cycling to glory in the French Pyrenees en route to winning a stage of the Tour de France. Moore wasn't familiar with Millar or even cycling, but by the time his countryman rode away from the peloton and crossed the line alone -- Millar's preferred status in many respects -- Moore was hooked.

The author went on to a brief, occasionally successful pro cycling career of his own, inspired on the way by dreams of Millar's heroism. Moore's story comes in contact with Millar -- first a teen-years meeting at a cycling camp, later when Millar selects Moore for the British National team, and finally when Moore rides for Millar's Scotland outfit at the 1998 Tour of Britain. The personal contacts are brief and the two don't become close, but this only further fuels Moore's interest. So when Moore embarks on writing the story of Britain's greatest and perhaps most elusive modern-era pro cyclist, the story is as much about Moore's quest for what makes Millar tick... what spawned Moore's fascination with Millar at the outset.

On the surface, the answer is simple: Millar was a pure climber, in an era where grand tours were largely decided in the mountains and heavily influenced by the exploits of climbing specialists like Millar. Since Millar's peak years the grand tours have been staked out by a breed of riders who do everything very well, for a variety of reasons including the elephant in the room. But in the mid-1980s, well-rounded Tour riders (LeMond, Hinault, etc.) were under constant pressure from the mountain men: Lucho Herrera, Lucien van Impe, Steven Rooks -- riders worth of the King of the Mountains title. Millar was firmly among this last generation of a disappearing breed, and in fact today (or thereabouts) marks the 20th anniversary of his triumph in the 1990 Dauphine Libere, perhaps his greatest stage race overall win.

Along with his greatness as a climber, Millar was chiefly known as one of the most difficult, aloof athletes of his time, and these two attributes ultimately compel Moore to go in search of the real story. Through the media and his own brief interactions Moore senses that the personality consists of layers beneath the "bad interview" guy, and by unraveling this mystery he might discover the great climber. The result is unsatisfying on the surface -- Millar participates only briefly, by email, and Moore is left to "play detective," in his words, and guess at what makes this strange man tick. But Moore doesn't give up easily, and not before unearthing some questions whose significance goes beyond one man's story.

My favorite thread in the book is Moore's examination of the tension between climbing greatness and grand tour success. Millar isn't the only pure climber with a quirky, independent personality, and it might even be that such personalities and the solitary aspect of climbing high mountain passes go hand in hand. But they similarly work against the rider, in Millar's case not merely because his talents don't translate on the flats or time trials, but also his aloofness deprives him of that signature grand tour win. Millar does poorly as a team leader, and his inability to make allies costs him dearly, most famously in the 1985 Vuelta a Espana, one of the craziest conclusions to a grand tour in my lifetime. He has bad luck, but as Moore points out, in the end he was lacking that certain something which would possibly have put him over into true British cycling glory.

I've said enough about Millar for now; read on for more details. As for Moore, In Search of Robert Millar is in a way the essence of a biography. Writing a book is hard work, I would imagine, and it takes a certain amount of inspiration to devote so much of oneself to writing the story of another person, a relative stranger. By making his connection to and appreciation of Millar central to the story, Moore lays bare the role of inspiration on the part of the author in a biography. Perhaps the task of cross-examining an absent, enigmatic witness is biting off more than he can chew, but Moore is driven by the same inspiration that we fans and/or cyclists bring to our own place in the sport. Moore's search is for the guy on the bike, and the personal story is sought a means to explain the rider. Moore even goes on to say that he wrote the book to rescue the story of Millar the Scottish Angel of the Mountains from the more prevalent storylines: media scourge, hermit, and of course the sex change rumors.

Moore is fan first, cyclist second, and biographer as a means for feeding those parts of his soul. This gives In Search of Robert Millar an urgency and importance well deserved of Britain's greatest Tour rider, a guy who spent his career driving less inspired people away from his story.