We were in Italy. Now we’re in France. The Critérium du Dauphiné is midway through it’s jaunt around southeastern France with its snappy new name. Critérium du Dauphiné. Win! Also, I hear there’s something going around about Armstrong donating money to the UCI. Maybe you’ve heard of it? In this week’s Sesh, we talk some bike racing. And a transfer rumor or two. Zombies walk the earth. There is doping and some mudslinging and hamsters. Hamsters?

The Critérium du Dauphiné headed into the mountains Thursday, for the first uphill finish of the race. Attacks lit up the road to Risoul. French rider Nicholas Vogondy won the day after escaping the main field with two kilometers to go. When we last saw Vogondy, the bunch caught him 40 meters from the line in Châteauroux during the 2008 Tour de France. This time, he made it. Vogondy called Thursday’s win a dream come true. Young Basque rider Romain Sicard finished second, and while the U23 World Champion felt disappointed to finish second, he is looking forward to the climbing stages in the Alps. Before the Dauphiné began, Sicard said he hoped to win a stage, and wasn’t much interested in joining the general classification battles. He said it was too soon in his career to take on the likes of Alberto Contador, Samuel Sánchez, and Janez Brajkovic. While he is looking forward to the Alps, Sicard does not quite know what to expect of himself in the high mountains.

In the general classification battle, Brajkovic leads after throwing down a screaming fast time in the long crono on Wednesday. American Tejay van Garderen sits second in the general classification. Van Garderen did a fab ride in the crono. Wednesday’s test was the longest effort against the watch so far in his young career. The American in his first year as a professional finished 40 seconds down on stage winner Vogondy on Thursday, and is 1:31 behind race leader Brajkovic. With the high mountains yet to come, van Garderen will have a battle on his hands to stay ahead of climbing ace Alberto Contador.

Contador currently sits third in the general at 1:41. Contador won the prologue, but he rode a rather ordinary long time trial. On Thursday’s uphill finish, he jousted with Brajkovic, but could not dislodge the RadioShack rider, who put in a few jabs of his own. With two high mountain stages to race, the battle between Brajkovic and Contador promises some entertainment, unless Contador decides that he’s just training. Which has like never happened before.

Denis Menchov also showed signs of life on the road to Risoul and took a flyer up the road. No better way to cast out those evil spirits from the Tour of Belgium, where Menchov abandoned during the first stage. Things seem to be looking up for 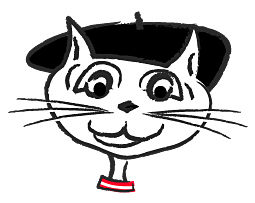 Menchov. In somewhat related news, Andrei Tchmil confirmed that Katusha was dearly like to buy the Russian’s services for next season. Maybe Menchov was just jumping for joy in Risoul. No word yet, of course, on whether Rabobank will let him go.

Oh, and I was previously told that Rein Taaramäe deserves mention. Taaramäe is ninth in the general at 3:29.Taaramäe Taaramäe showed well on the final climb today, finishing just 3 seconds behind the Contador-Brajkovic duo. A top ten finish overall looks well within reach for Taaramäe. You want mention? We got mention.

On the subject of climbers, Paolo Tiralongo is enjoying his new team Astana. The climber, who looks like Damiano Cunego’s body double, said that the chemistry at Astana has been great. I was talking about the food. No, really.

In other Lampre-related news, rumors swirl that Cunego may leave the team for next season. This isn’t the first time that the media has linked Cunego with teams like Sky and Cervélo. The close personal relationship between Cunego and Signor Lampre makes it more likely that the Italian will stay put as he has in the past. But stranger things have happened. Like, Andrei Kashechkin may return to racing with Lampre. The Kazakh, whose doping sanction ended in August 2009, remains without a team. Why would Lampre sign him? Because Kash could bring the cash, in the form of a personal sponsor. Free rider? Sure, we’ll let you wear our jersey. Grazie mille!

Over at Quick-Step, Lefevere is wishing he could get free riders. Woe is me, it’s so hard to find sponsors. Why can’t my team win every race? Maybe we could merge with Omega-Pharma Lotto. Yeah, that’s the ticket. Oh Leffy, just have another Leffe, and it’ll all be okay. Over at Lotto, Marc Sargeant is less than enthusiastic about Lefevere’s ideas. Merger? No thanks, says Sergeant. We’re perfectly capable of losing races to Cancellara on our own, thanks.

Meanwhile, the Zombie Tom Boonen lives! How else to explain the latest ad campaign from Eddy Merckx Bicycles, who sponsors Boonen? Sorry Eddy, I’m a vegetarian. I hope they paid Boonen extra for that bit of idiocy. Some people will do anything to get attention. Made you look!

At last, it seems that TAS stuck a wooden stake through the heart of the Zombie doping case. That’s the Valverde case, for those who’ve been stuck in a cave for the past six years. In a postscript to the case, it turns out that the UCI reportedly offered Valverde a dealio. The deal went something like this: You admit that the blood bag is yours, we give you a shorter ban. Simple. The shorter ban would have allowed Valverde to return to racing in July 2011, rather than January 2012. Also, the UCI would have allowed Valverde to keep his results from this season. On the advice of his lawyers, Piti declined to admit to owning blood bag #18. He will refrain from bike racing until January 2012, and he lost this season’s results.

The ban comes as a consequence of the TAS ruling in favor of the UCI in the case the organization brought against the Spanish Federation. The UCI argued that Valverde deserved a ban based upon the available evidence. TAS agreed for much the same reasons that the court upheld the Italian ban against Valverde. TAS imposed the new 2 year suspension that extends worldwide and runs until January 2012. No, you’re not crazy, it appears that Valverde has been banned twice by different organizations for the same offense. It’s a dog’s life, anyhow. One final footnote, it seems that the Tour of Romandie is not enthusiastic about changing the final results of their race. Yo, Tour of Romandie, what did Simon Spilak ever do to you?

In Austria, meanwhile, authorities have decided not to pursue criminal charges against Bernhard Kohl or Michael Rasmussen in connection with the HumanPlasma blood doping ring. What does this development mean for the case? I’m not sure, really. Hey, at least I’m honest!

It’s June, and you know what that means. Yes, it’s time for another round of cage fighting between the UCI and the French anti-doping authorities. Your testing sucks. No, it doesn’t. Yes, it does. Nyah, nyah, nyah. The AFLD, that’s the French side of this brawl, claims that during last year’s Tour de France, the UCI played favorites with the teams, including giving some teams advance notification that the testers were on the way. As anyone who knows doping controls can tell you, advance notification is bad. It opens the door to all sorts of nefarious things, like 20 minute showers and 30 minute coffee breaks. Anyway, the AFLD wants to wrest authority over doping controls during the Tour de France back from the UCI. But the UCI doesn’t want to give it to them. I want some marbles too! Patrick McQuaid called the AFLD criticisms "bullshit." Actually, I think it was "pure bullshit," which is much much better than the unpasteurized, unhomogenized type. We like it pure. It’s far too early to know for sure how this round of UCI-AFLD fighting will end. After all, there’s still a full three weeks until the Tour de France start in Rotterdam. Plenty of time for the monkeys to throw more of the pure stuff.

Yes, it’s been a busy week for the UCI, what with Valverde and his blood bags, the AFLD causing trouble, and that pesky matter of Landis, Lance, and Lance’s donations. Earlier this week, the UCI sent Landis a letter telling him to stop with his accusations against the organization, already. Stop it! No, stop! I mean it! Obviously, the move intended to intimidate and discredit Landis, while at the same time, deflect attention from growing questions about Armstrong’s donations to the UCI during the time the American was racing. Conflict of interest? Yes we can. In this week’s edition of the Wednesday Comment, Cycling Weekly recounted the whirlpool of conflicting stories over the Armstrong donations. Maybe it was 20,000. Maybe 100,000. What year was that? Really, we can’t recall. Sylvia Schenk, a former head of the German Federation and UCI officer, said the donations may have totaled 500,000 in all. Well, it’s all just money anyway. Since Landis hasn’t personally made a great many statements in the case, the UCI’s stop letter remains a mostly meaningless gesture.

For his part, Landis has hired the big name law firm, Wilson Sonsini Woodrich and Rosati. The firm specializes in corporate law and represented Greg Lemond in his dispute with Trek Bicycles. The Lemond-Trek case settled out of court. Apparently, Lemond is not footing the bill for Landis, which raises the obvious question as to who is. Wilson Sonsini et al., these guys don’t come cheaply. The Landis case also does not fit the usual pattern for a pro bono case, since those cases generally involve common good issues or large expected pay-offs. Plainly, someone wants to see Armstrong get owned. Or, maybe they just love cancer.

Look! Look over there! Motorized bikes! Sometimes, every day is April Fool’s Day. Just don’t forget to feed the hamsters.