To Zeeland we go this weekend for more stage racing. Zeeland is a place that is particularly fond of putting on bike races: we were here in April for the Omloop van Borsele when Kirsten Wild beat Rochelle Gilmore after catching up a four woman break just 200m from the finish line, we came back in May for stage 3 of the Giro d’Italia when the whole Sky team took out Cadel Evans, Matt Goss led out Wouter Weylandt, and the Café discussed the meaning of rooting around the world, then just last weekend Tyler Farrar won the Delta Tour. And at a time when races are vanishing everywhere, isn’t it nice to hear the organiser of the RaboSter Zeeuwsche Eilanden say that the three-day cycle for women this year … has the largest budget ever.

And if you don’t remember the terrain then the names mentioned above should give you a clue as to the nature of this race, else you can have a look at the profiles for stages one, two and three (pdf files). Note that the Cima Coppi comes at Vrouwenpolder on stage 2 at the dizzying height of 7.5m above sea level. So the only thing stopping this turning into a 100% sprint festival is the opening timetrial, and that along with the bonus seconds available at intermediate sprints and at the end of the stage are likely to decide the overall GC. 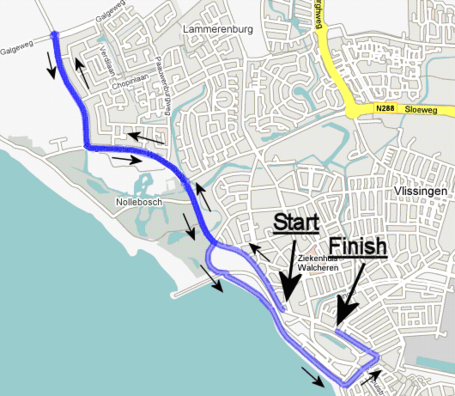 Stage one on the evening of Thursday 17th is a short (7.1 km) timetrial close to the seafront in Vlissingen, finishing on the boulevard described by the organisers as "maybe the nicest of Europe or the world" Have a look and see if you agree. This stage starts at 18:30 local time and the riders will be going off a minute apart. If they do get 200 starters that means that the last girl will be setting off just before 10pm. 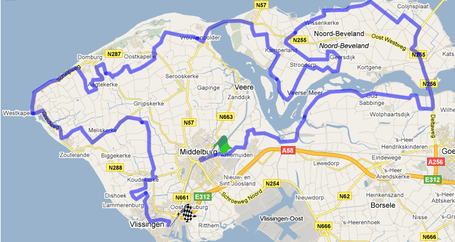 Friday’s second stage is a proper road one setting off from Middleberg on a long loop of almost 114 km which finishes in Vlissingen again, but only after a careful search of every shoreline in Zeeland which might give a bit of wind to shake things up. It’s another 18:30 start, expected to finish about three hours later, so at least yesterday’s late starters can enjoy a lie-in. And lunch. And dinner. Will the results be affected by any stomachs still on Spanish time? 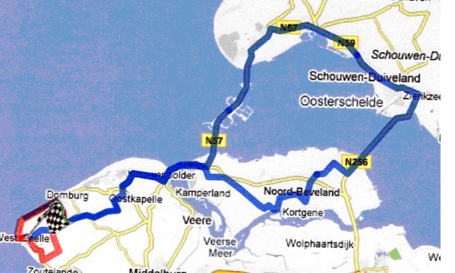 Saturday’s last stage goes for the unexpectedly normal start time of 12:00, leaving Westkapelle, some 10km northwest of Vlissingen, crossing two long dams, Stormvloedkering which is 8km and "always windy" and Zeelandbrug just 1km shorter, before returning to Westkapelle for two laps of a 16km circuit. This stage is also the longest of the race at 134.7km.

So who’s riding? At the moment the answer must be world plus donkey. The organisers have invited 28 teams including familiar faces such as Nederland Bloeit, Red Sun, Leontien, Lotto and the sprinty half of Cervelo, and not so familiar ones like the Scottish and Irish national teams. Right now 224 riders are on the provisional startlist, twenty teams of eight and 24 more than the UCI officially permits, so last minute withdrawals are sure to be met with outer commiserations and inner whoops of relief. The only surprise is that HTC-Columbia who took the first three places last year aren’t returning to defend. I guess that looks like Kirsten Wild, Rochelle Gilmore and Marianne Vos for the 1-2-3 this time round.

As with the Omloop van Borsele, coverage for the distant spectator looks to be excellent. The organisers have set up a page ready for live commentary on every stage, complete with a link on the page to the Google translated version. They don’t promise much for Thursday, but expect to have extensive commentary for the road stages on Friday and Saturday. If precedent is anything to go by then they will also stick up a couple of videos on YouTube. The only thing missing is space for live chat. I guess we'll have to find that ourselves. In the meantime here is a report from a local TV station (newspaper?) about the preparations.