Queen for a Day: A Look at TdS Stage 6

Share All sharing options for: Queen for a Day: A Look at TdS Stage 6 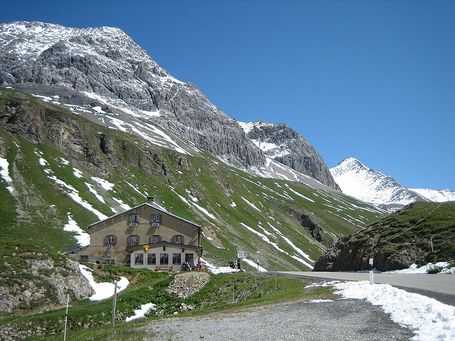 Tomorrow the Tour de Suisse will finally take its full shape, or that's the hope anyway. Clearly billed as the Queen Stage of the 2010 Tour, this stage should allow for far more of a selection than the prologue or stage 3 did, and possibly more than the closing ITT as well. In other words, if you're here to win, Thursday's the day.

The day takes in three major passes: the Sustenpass, Oberalppass and the Albulapass shown above. The Sustenpass (27km (!) at 5.8%) comes pretty much right out of the gate, so while it's a hors categoire climb and will undoubtedly launch attacks, it shouldn't animate the main contenders. The same can be said for the Oberalppass (10km at 5.7%), which peaks out with 145km remaining in the race. Amazingly, there are some 80km of flat-to-slightly-inclined racing from the bottom of the Oberalppass to the business end of the race, so those first two climbs, while softening a lot of legs, won't detract from the need for teammates in what promises to be a long, hard run-up to the day's major ascent, the Albulapass.

The numbers at climbbybike are a bit deceptive: 30km at 4.7% average sounds like a standard highway grade. But look closer: 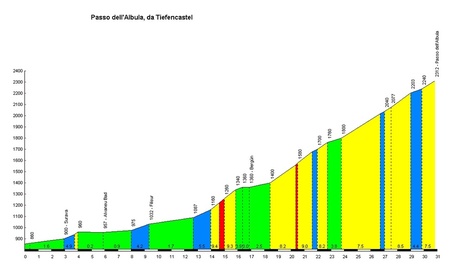 If you can't see well, the yellow indicates gradients in the 7-10% range, and the red are ramps in double digits. Basically, the overall numbers are watered down by the first 14km of modest climbing, even flats. Twelve of the last 17km are hard, selective gradients averaging over 8%, with a big break after the first two hard km, then 12km of fairly consistently hard riding. When they get done, there's a screaming descent into La Punt, which could be complicated by nasty weather. Fun times.

We can kinda-sorta say with the benefit of hindsight how this race will shape up, thanks to the fact that the TdS ran a very similar stage in 2006. Back then they started with the Furkapass instead of the Sustenpass, but otherwise it was the same route from the Oberalppass to the line (via the Albula) in La Punt. Of course, you have to take it with a grain of salt: Koldo Gil won on a long escape followed by Jorg Jaksche and Jan Ullrich, two ambassadors for clean cycling (cough). However, there were plenty of riders not currently under any particular suspicion, like Jani Brajkovic, Frank Schleck (OK, I know), Simon Gerrans, Linus Gerdemann, etc., and the spread among the top 25 finishers was in the five minute range. In other words, someone's gonna get hurt out there tomorrow (GC-wise, hopefully not bodily), and that's assuming weather conditions that don't add any further element of distress. And if it is raining, look for bike-handling skills to be a huge factor in the conclusion of the race. Should be fun!