I don’t know how the Giro del Trentino came to be timetabled at the same time as the Raboster, but whoever put the two side by side must have had in mind one of those old music hall comedy double acts where the two partners looked as unalike as possible. Think Abbott and Costello, or Laurel and Hardy. Then stand them in front of one of those funny fairground mirrors. ‘Cos if your Cima Coppi is 7.5m above sea level then the Giro Ciclistico del Trentino (Memorial Audenzio Tiengo) has one thing to say to you and it looks awfully like a middle finger.

That’s the profile for stage 1. Because prologues are for sissies. And the Dutch. And if you think that that looks nasty enough just for the climb, Fenixs-Petrogradets rider (and Labrador tummy-tickler and feeder) Suzie Godart did some training in the Alps to be ready for the Passo Mendola. It probably won’t be quite so snowy as the Grand Saint Bernard, but you never can tell.

Trentino is a linguistic oddity in Italy. For historical reasons there are large numbers of German speakers in the area, but the hilly terrain has also kept alive pockets of real curiosities such as Ladin, Mócheno and Cimbrian. So if the commentators sound even less comprehensible than usual you have an excuse. It is also proud of its bike races. Stage 1 sets out not from some unknown village, but from the provincial capital Trento (194m above sea level), crosses the Passo Mendola (1363m) before finishing with a 14km descent (plus 1km flat) into the finish town of Appiano sulla strada del Vino 75km away. If you make it to there then the rest of the race is a bit of a doddle. Relatively. 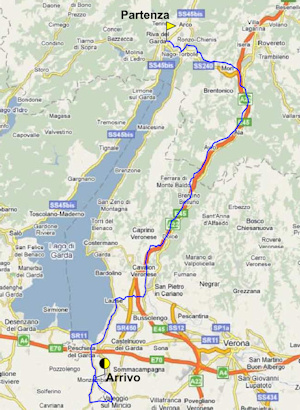 Stage 2 moves slightly south to the shores of Lake Garda (here’s hoping they can all steer a bit better than James Bond) , taking the scenic route from Riva del Garda at the northern end to Monzambano a couple of km south of the southern end. Of course this being the Giro del Trentino they don’t take the shoreline, but head inland to find a few hills. Nothing too extreme: the Passo San Giovanni is only 275m high, but to make up for that they add a few km for a race distance of 111km. 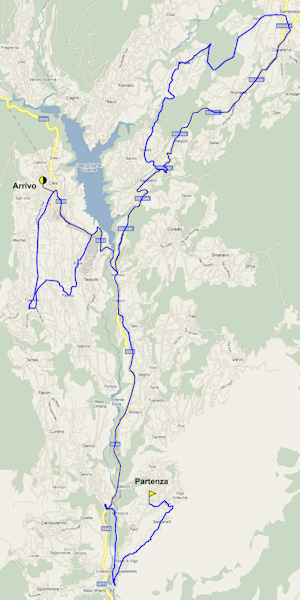 That was the rest day, then stage 3 heads back to the hills north of Trento for a day similar to the first, i.e. short and nasty. This stage runs from Castello di Thun, a spectacular mediaeval fortress, follows the Non valley northwards with a diversion to Cavareno, 985m and halfway up the road to Passo Mendola on Friday infamy, to finish at Cles, overlooking Lago di Santa Giustina. It looks lumpy enough on the map to make a chase difficult if some riders get away, but nowhere near as decisive as stage 1.

Defending champion Nicole Cooke will be leading her new-look British team, including long-time overlookee Catherine Williamson among others. Up against her are HTC leaders Judith Arndt and Noemi Cantele, Australia’s Tiffany Cromwell, Trixi Worrack of Noris and Tatiana Guderzo of Valdarno, both searching for their lost form (shouts of it’s behind you are not appreciated) and Italy’s girl wonder Rossella Callovi. Oh and did I mention the Cervelo monster. Laws, Hausler, Pooley and Ryan for a start, not that Lieselot Decroix and Patricia Schwager are to be written off. Here’s the full start list.

TV coverage of this one should be good. RAI have scheduled three 40 minute programmes on Rai Sports 2: at 23:00 CET on the 18th and 20th, and at 23:20 on the 19th. As ever with RAI Sports, those times should be regarded as approximate.

All stage maps and profiles courtesy of the organisers