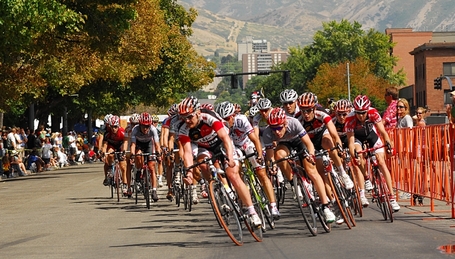 Phil Z, far right, on the front at the Tour of Utah Criterium.

It's a live chat!

Bet you thought we'd forgotten all about these fab things. Not at all, my friends. This Tuesday, 22 June, we will host a live chat with Phil Zajicek of Fly V Australia. Phil will be here from 12.00-1.00 pm PDT. That's 3.00 pm for you East Coast people and 9.00 pm for the continental Europeans. You should all come! It'll be fun!

Phil Z is a climber-stage racer here in the U.S, and he's ridden for some of the big teams on the North American circuit: Saturn, Navigators Insurance, and HealthNet-Maxxis. His major results have come in the hilly stage races like Mount Hood and Cascade Classic. Zajicek has also won the silly hilly Ironhorse Classic one day race (Just look at that scrumptious mountainy profile.). His most recent claim to fame came last season at the Tour of Gila when he out-sprinted Lance Armstrong and Levi Leipheimer to win the final "Gila Monster" stage. This year, he was on, then off the podium at Gila, swapping spots with Dave Zabriskie after the officials miscalculated the results.

When Zajicek isn't racing, he roasts his own coffee beans. (This, I have to know more about.) He also has an English mastiff named Lucy. And he likes to shoot photos (We have no one here at the Cafe like that.) Check out his profile over on the Fly V Australia site for more infos, including four people he'd like to join for dinner. He's on Twitter, too. Okay, is anyone not on Twitter? Catch up with him @philzajicek.

Want more? Check out the recent interview over at Fair Wheel Bikes. You can also some scrumptious photos of his team bike. DeRosa, yum! And certainly give Lyne Lamoureux's 2008 interview in Roadbike Review a read.