Share All sharing options for: Giro Donne - A look back at 2009 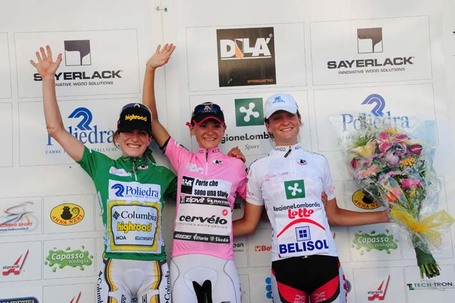 There’s not much live racing around to watch this week, so while you’re all waiting around for next month’s big race to kick off in Italy then why not sit back and enjoy the highlights of last year. Or even if you’re just waiting for some small, shitty race in France. The 2009 Giro visited some parts of Southern Italy that even the tourists don’t visit that often, and it gave pretty conclusive proof that Italy is beautiful everywhere and that you’re never more than a couple of hours from a climb. In the final GC Claudia Hausler beat Mara Abbott by 30 seconds, with Nicole Brandli 2 minutes further back and Emma Pooley another 4 minutes away, but at times it was a lot closer and sadly both Amber Neben and Judith Arndt who had been serious contenders for the lead crashed out. I doubt if they would have beaten Claudia but they would surely have made the end a lot closer.

Things opened with a short prologue in the little village of Scarperia, just a champagne spray away from the Ferrari test track at Mugello. Italian stage races are quite fond of opening evening timetrials, but too often they are up the street, U-turn and back affairs that happen in a dark corner of town. Last year however they got it just right and the pink glow of the sunset made it all the more perfect. Here’s my report from last year, and if you want to watch it then here are parts one, two, and three.

Stage 1 was the gently rolling sort of stage that we’re used to seeing in the opening weeks of the Tour de France, that didn’t in the end have much effect on the GC, but gave us the first of those nasty uphill finishes. It was won by veteran Edita Pucinskaite, or Peter Pan as the commentators called her, and the bonus seconds gave her a day in pink too. Here’s the report and video parts one, two, and three.

Stage 2 was the time-trial proper, and yet again it had a very nasty uphill climb at the end, with the added novelty of passing through some streets so narrow that you wondered at times if anyone would have to dismount or pull a wheelie to get round the corner. The then world TT champion Amber Neben won the stage and moved into pink. Read about it or watch parts one, two, and three, or skip straight to the meat of part four:

Stage 3 was meant to be the re-coronation of 2008 winner Fabiana Luperini. Monte Serra was her "home" climb, the place she regularly trained, and the place where she had won the 2008 Giro. But this time she was several minutes down the road as Emma Pooley and Mara Abbott vanished into the distance. At the end Mara sprinted off to claim the stage, while Emma ground into pink. Note the scars on the arms and legs of both, suggesting that neither were particularly brilliant descenders. Here’s the report and video parts one, and two.

Stage 4 was the first chance that the sprinters had been given, with four laps around a circuit in the coastal town of Porto S. Elpidio ending with a sprint beside the beach. Unsurprisingly Ina-Yoko Teutenberg won, and she won by quite some distance, and Emma Pooley became the first pink jersey holder to keep it for a second day. Again, report, video one, two, and three.

Stage 5 was probably my favourite stage of the whole race. It didn’t look much on paper with a long slow climb from the coast into the centre of Italy followed by a reasonably steep descent, but the printed profile hid the fact that the final climb was at slopes of up to 16% and on cobbles. You get used to seeing stragglers in any bike race zig-zagging their way up the worst hills. But I can’t ever remember seeing the stage winner trying so hard to keep a straight line the way that Noemi Cantele did. Emma Pooley lost a bit of time on the descent here but just managed to keep hold of the pink jersey for one last day. Unfortunately one potential GC winner, Amber Neben, crashed out. Read or watch parts one, two, and three.

Claudia Hausler first put on the pink jersey at the end of stage 6, and she did it while trying her best to defend her teammate. All the leaders were together over the two big climbs of the day, with Mara Abbott claiming maximum points on the Cima Coppi at Prato Gentile and ensuring that the green climbers’ jersey was hers. But on the long descent she and Judith Arndt excaped along with Nicole Brandli and Hausler, and Pooley wobbled her way down to a five minute loss on the day. See it in words or pictures, one, two, and three.

Columbia and Cervelo seemed content to just keep things under control for stage 7, a rolling day in the hills with barely a metre of flat land. And right at the very end everyone else seemed to draw back and leave the field to the two contenders, Hausler and Arndt, and their nominated seconds, Abbott and Kristin Armstrong. In the final hundred metres, Armstrong grabbed the good side of the road for Hausler who scampered off for the stage win and a few valuable bonus seconds. Here’s the report and video parts one, two, and three.

The fight for the GC fizzled out on stage 8 when Judith Arndt fell and broke her arm for the third time that season, which left Claudia Hausler a long way clear of second place Nicole Brandli. On yet another hilly stage, a break got away and Trixi Worrack got away from the break to claim the stage. Once more the report and the video parts one, two, and three.

Any sprinters who had survived to stage 9 finally got their second chance of a win through the streets of the Naples suburb of Grumo Nevano. Columbia tried to protest that the roads were too narrow and twisty to be safe, but everyone else ignored them and put on a great performance, and Kirsten Wild just squeezed ahead of Giorgia Bronzini, with Diana Ziliuite claiming a good third place in her very last Giro stage as a rider. Here’s the last of last year’s reports and the video from that day, parts one, two, and three:

If you read the comments to last year’s pieces you will find links reports by a German who calls himself Enrico Muax, who wangled himself a position as a driver with team Nurnberger and made some great videos. Watch them all, even if you don’t understand a word of German; most of the interest and humour there is visual. This is the sort of report that more teams could produce for themselves.

Of course, stick around Podium Cafe for more previews and coverage of this year’s race. And if you come across something that you think we'd like or we seem to have missed, then post it in the comments or as a post of its own.