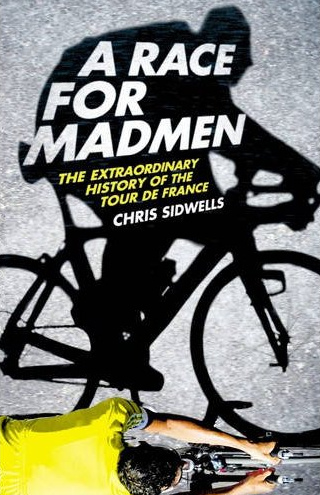 If you’ve already read one of the many other histories of the Tour de France why should you also read this latest offering on the race’s history from Chris Sidwells? Or, if you’ve yet to dip your toes into the history of la grand boucle, why should you start with A Race For Madmen?

Answer came there none.

I can certainly offer you good reason not to waste your time or money on this book: I’ve yet to read a history of the Tour de France that contains as many errors as this one does.

Title: A Race For Madmen
Author: Chris Sidwells
Publisher: Collins
Pages: 330
Order: HERE
What is it? A history of the Tour de France.
Strengths: It aims to be comprehensive.
Weaknesses: Too often it's inaccurate.
Rating: ★ (1 of 5)

If the only errors in Sidwells' book were of a sort like one moment saying that Albert Londres’ famous Pélissier interview took place in 1924 and the next saying it was 1923, or saying on one page that Maurice Garin was stripped of his 1904 Tour win but saying on another page that it was 1903, well then I think it would be fair to criticise me rather than Sidwells. These are petty little things, signs of shoddiness for sure, but really just the sort of error you'd expect a good editor to normally save an author from committing to print.

Nor, I think, would it be fair of me to criticise Sidwells for saying that there’s only been six directors of the Tour in all its history, Let’s face it, who really cares how many men have directed the race down through the years? It’s not as if it's ever likely to come up as a question on Eggheads, or even on the off-season Trivia Monday quiz.

I could even be expected to adopt a generous attitude and forgive Sidwells for perpetuating the myth that the Ballon d’Alsace was the Tour’s first mountain even though most every other history of the race acknowledges that that was just hyperbollix on the part of Henri Desgrange and the Tour’s real first mountain was the Col de la République.

After a while though all these little inaccuracies - petty and all as they may seem - begin to mount up and, weighted down by them, any reader's patience would be sorely tested. Especially when you come to a claim such as that Phil Anderson was the second English speaker after Tom Simpson to wear the race leader’s yellow jersey. This claim comes only eighty pages after Shay Elliott’s four stages in yellow were dismissed in eight words - what language does Sidwells think Elliot spoke, gaelic?

My patience though really snaps when Sidwells builds an argument on a mountain of errors, such as his claims about the impact of Greg LeMond’s 1986 Tour victory:

"There was even talk of a feature film based on an American winning the race. Félix Lévitan loved it. Perrier lost the job as official drink of the Tour, to be replaced by Coca-Cola, and there was talk of holding the Tour prologue in New York, possibly franchising the race."

The NY prologue was floated by Jacques Goddet four years earlier, in a 1982 L’Equipe piece titled ‘Towards A Tour Mondialisé.’ Coca-Cola pushed aside Perrier to become the race’s official drink in 1985, as is obvious from the red bidons to be seen in race photographs from that year forwards. Hollywood’s interest in the race – Yellow Jersey, slated to star Dustin Hoffman and be directed by Michael Cimino – had been in and out of favour with studios for over a decade. In 1984 it had been 'in,' partly based on the modest success of Breaking Away. In July that year plans were so far advanced that Hoffman, Cimino and a film crew turned up at the Tour to capture race footage for the film.

Enough though with the errors (for now). Surely there’s got to be something worthwhile lurking somewhere in the 330 pages of this book? Well Sidwells does breeze through ninety-six editions of the race at a jaunty pace, telling us who won (if, that is, you’re willing to believe anything he tells you after all the errors you’ve already spotted) and offering an incident or two from most races. The criticism I would offer of this is a criticism I would offer of most of the other books that try to squeeze so many stories into such little space – one name just blurs into another (... begat Kübler and Kübler begat Koblet and Koblet begat Coppi and Coppi begat Bobet and Bobet begat ...) and since pretty much all we learn of each – save the usual suspects, who get the usual capsule biographies – is what he did in the Tour, we learn very little about any of them them and why any were better or worse than another. As I say though, that’s a criticism not unique to Sidwells.

When it comes to doping I can at least say that Sidwells does make an effort, the book’s index showing about two dozen references to the subject. Sidwells’ effort on the subject though doesn’t excuse the execution – too often it seems he simply doesn’t really know enough about the subject to make some of the claims he does. He tells us that the 1924 (or was it 1923?) Londres piece was ‘the first link between doping and the Tour de France.’ It wasn’t. Desgrange had raged against the impact of doping on the race in 1920, saving his condemnation for managers and doctors. And the winner of the 1907 and 1908 editions of the race, Lucien Petit-Breton, publicly denied that his victories had been down to doping.

Even when it comes to more recent history Sidwells seems unsure of his facts, apparently believing that Operaçion Puerto happened in 2007 and becomming befuddled by the facts of the Floyd Landis and Michael Rasmussen cases. But, to be fair to the man, his heart is in the right place and he believes the future’s bright:

"There wasn’t a positive dope test during the 2009 Tour, and the ones that occurred in cycling that year were from the lower echelons of the sport; either young men impatient to get on, or old ones trying to hang on to a job."

All the same, for a man who claims that ‘everything must be done to eradicate doping from the sport’ I was somewhat surprised by the way Sidwells soft-pedals through the reign of Miguel Induráin. Surely ‘everything’ includes ‘one of the UK’s leading cycling journalists’ doing a bit more than just peddling the myth of a man whose dominance was down to super-sized lungs ‘and a heart so big that it only needed to beat twenty-eight times a minute to pump blood around his body.’ Or suggesting that Indy’s 1991-95 dominance was somehow down to losing six-and-a-half kilos over the winter of 1986-87. But the only time Francesco Conconi crops up in the whole of Sidwell’s version of the sport’s history is in relation to Bernard Hinault’s 1984 come-back from surgery and the Italian’s ‘discovery’ of the anaerobic threshold.

At least when it comes to the Lance Armstrong era Sidwells does acknowledge the existence of an alternative history, although even here he’s shaky with his facts (the Sunday Times story Armstrong sued that paper over was not written by David Walsh). The seven years of Armstrong’s grip on the Tour are told through an interview Sidwells carried out with Johan Bruyneel at the latter’s Madrid home in 2005. His faith in Bruyneel is such that Sidwells confidently claims that ‘Nobody has directed more Grand Tour winners than Bruyneel.’ I can’t decide whether that is just poor composition or demonstrates a total lack of knowledge. I will add though that Sidwells claims that Alberto Contador’s 2007 victory was Bruyneel’s sixth Tour success.

Sidwells’ ineptitude aside, perhaps if A Race For Madmen had a decent raison d’etre, some unifying narrative that linked the many stories together, then it wouldn’t seem like such a total waste of time and effort. But there just doesn’t seem to be one. There certainly isn’t one that justifies the book’s title. Sidwells is sprinting through marathons so fast that the sense of the epic nature of the race – and of the type of personality needed to ride it – is lost in the hurtling rush from one year to another. Even when he comes to a character like Ferdi Kübler – aka the pedalling madman – Sidwells doesn’t realise the potential of the tale and instead digresses into the too-oft-told tale of Abdel-Kader Zaaf’s snooze under a tree.

Apart from the errors, what’s most depressing about A Race For Madmen is that Collins – a part of the Rupert Murdoch media empire – think that they can get away with publishing a book like this, that cycling fans will pay good money for any old tat about our sport. They fooled me. Don’t let them fool you.