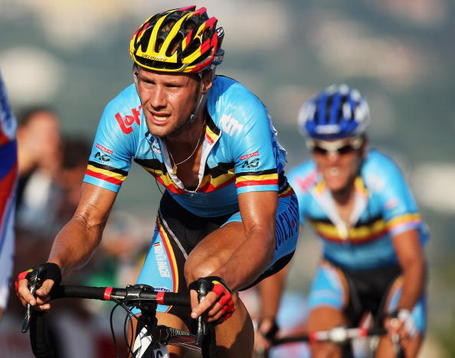 Over the last two weeks the story of Tom Boonen's ailing knee has been simmering, nobody saying anything too definitive about how bad things are. One rumor suggested he might not make it to the start. Reports of him landing on his bum knee in the Cavendish-Haussler crackup raised concerns, though nobody has come out and said he won't carry on. He skipped Halle Ingooigem this past weekendyesterday, returning from the Tour de Suisse, in order to focus on the coming Belgian Championships and the Tour. Now, however, his manager Patrick Lefevre admits that while Boonen's knee is functional, his fitness might not be. "I am a bit worried," Lef tells Sporza. Boonen had gone to Switzerland looking to round out his form, but between the knee issue and the crap weather, he didn't get the fitness bump he'd hoped for. Now Lefevre is predicting that Beans might only hit his stride in the second half of the Tour.

Meanwhile, over at VeloNews, the Quick Step roster is announced with the "news" that Boonen is aiming at stage 3, across the cobbles of Paris-Roubaix. That may still be true, or may have been the case before last week, but it certainly doesn't square with Lefevre's cautionary statement. Another possibility is that Lefevre is sandbagging, but as we saw this spring, sometimes he talks down his team's chances because they in fact aren't very good.

[Update] And now he's out. See Gavia's fanshot above.