Well I seem to be late the party on this one but I have 5 riders of my own that might seem obvious to you while a couple of them are newer that could surprise. Going into the Tour this year, it seems to be stacked with star power and many of us could probably give a good number of correct predictions on who will win stages and riders that will be the top 10 but I think that a few of the riders on here will meet expectations and/or surprise. A point I want to make with young riders is that their is a fine line between being babied and having some solid expectations...these guys shouldn't be treated like they are super fine china but they also cannot be pushed beyond their limits which has been the downfall of many a promising talent. So I will be giving you 4 young riders and one "older" one (though he is still under 30...) to nosh on before Le Tour begins. 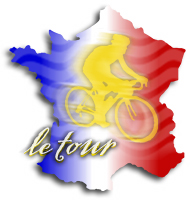 Many of you might think something like "He is still a young rider?". In '04 he was World Junior Champion in the Road Race along with 2 silver medals in the World TT and CX champs. He took after his father, a former world junior CX champ and winner of the Tour of Austria and this is now his 5th! season on a Pro Tour squad. Going pro that young, let alone on the highest level, can be a very hard but Kreuziger has progressed nicely over the years and while some people might give him a hard time, he is just turning 24 this year and his progress is coming along nicely. Not everybody can be Merckx and Hinault, winning the Tour at 24,etc.

TO THE FLIP!!...and read more about Mr. Kreuziger and the 4 other lucky gentlemen.

In his first Tour in '08, Kreuz rode steadily, not always riding with the lead pack and other times being in the elite selection but in the end he ended up a respectable 12th which is a very fine result for a 22 year old, especially the Tour and finished 2nd in the white jersey behind Schleck #2 (Andy, if you didn't know) though that can be taken with a grain of salt since he was in more of a domestique role at times.

Looking back at last year's Tour, Kreuziger rode a different race than the previous year though still improved by 3 spots into 9th. He didn't seem like he was firing on all cylinders and wasn't able to follow the lead pack all the time on the climbs and lost big time on a few stages. Even though his teammate Nibali was only 2 spots ahead of him in 7th, he was over 7 minutes ahead of him in G.C. and was able to follow the leaders on many more occasions.

Looking to this year's Tour, he needs to keep his upward trajectory in the GT's going and try to improve 2-3 G.C. spots which might be tough but doable this year, especially with a stacked field. His form at Suisse wasn't top notch but he really only had one bad stage in hindsight and if he can improve his form in the lead-up to the Tour. His climbing seemed to improve this year and he was climbing with the the lead group on the Queen stage and following moves. He will most likely lay down a good prologue and coming from his CX background and having teammates like Quinziato he can surprise on the cobbles and stay with the first group of G.C. favorites.

My prediction: 7th overall, around 10 min down on the winner. An improvement and will keep his sights towards improving to the next year.

Only 2 years ago, T-Mart busted out onto the Pro Tour scene with some dominating TT performances at a young age of 23. Winning 3 time trials his first year and notching a huge amount of high placings last year (8 top fives in ITT &TTTs), the question on the tip of everybody's tongue, well at least mine anyways, is if Der Panzerwagen can go head to head with Mr. Time Trial himself, Fabian Cancellara. The two are no stranger to going head to head with previous meetings at last year's Worlds and this year's Tour de Suisse. Martin is, like his nickname states, a tank. His time trialling can be summed up as him using a big gear and using one speed: breakneck fast. This is more adventageous in longer TT's though he has improved as seen in Suisse by only losing by 3 seconds to Cance. The 2 will be able to have 2 duals: The prologue and stage 19, a 51km affair. Martin put in 17 seconds into Fabu at Suisse in a 26.9km effort though it would be hard to use it for a good comparison since their are many factors to judge. Over a similar 30km, Martin put in 40 seconds over 2nd place at the German champs.

Martin seems to be in stronger form this year, TT wise, and will be a strong favorite to go into white after the prologue and hold it for at least the first few stages. With his climbing being up and down this year, with some very strong performances and getting dropped pretty quickly, I would like to think that this year he will pick and chose his places wisely to hep Rogers and see how he feels himself but I see him focusing on the long TT and trying to upend Fabian.

Prediction: Martin will win a stage. It could be the long TT but if he loses time in the mountains, he might be able to slip away in a breakaway that sticks and solo home for a victory.

As you can see, I like the young riders and this is yet another one that has strong ability all around and can definitely win another GT stage to go with his Vuelta stage win. I like Roux, maybe because he shares my birthday and is only 3 years older than I, but he also has an attacking style about him and never say die attitude that I really dig and wish more riders had. Take his Vuelta stage win...he put everything on the line and went screaming past Maaskant and put everything he had into that attack, barely holding on at the line, but he held on nonetheless and succeeded.

Roux can have his good days and he can also have his bad days but when he is on, he can go quite well. His best results come in the short tours and French one-day races but in the granddaddy of them all in the GT world, he will be able to pick and choose his spots. Something that I could see happening with Roux is him getting away on a day like stage 2 or another rolling stage and snatching the K.O.M. jersey for a few days.

Prediction: Multiple breakaways and the possibility of a stage win. I see him getting a 2nd or 3rd more likely but I have hope that he can keep the success going.

Some people might look at the name Cyril and think of the classic movie, Breaking Away and the gangly Daniel Stern, of later Home Alone fame. While that might bring fond memories, the Cyril that I am talking about is from France, not Indiana.

Gautier is my last young rider, just 22 at the moment and turning 23 in late August but he is one the interests me. I was thinking about going with 2 Bweeg riders since his teammate Pierre Rolland looks ready to bust out for a strong performance but I can cover him in my bigger post so I thought I would go for the underdog. BBox-Bweeg overall has quite a strong team with Vogondy, Rolland, French champ Voeckler, Chainel, Arashiro and co. The real reason that I chose Gautier is that I see him as a young candidate to make a serious charge for the K.O.M polka dots. He might not win the thing but I can see him going top 3-5 in the competition with some strong breakaways.

Prediction: Going a bit bold with this one and saying a few day's in the Polka Dots along with a two breakaway rides. He might drop out before the end but I am interested to see how he does.

Don't be shocked that he is over the age of 25 at all because while I do have a penchant for following the young rider, I pretty much follow anybody and Mr. Knees (pronounces Ka-nees) is one that might fly under people's radars. This unassuming German, who has had some pretty solid G.C. performances over the years, is looking to have a big year this year and his prep for the Tour has gone very well. After having a modest 12th overall at the Bayern Rundfahrt, Knees had a strong Dauphiné by finishing 13th overall which looks better than it might sound. He lost the majority of his time on the Alpe d'Huez stage, which isn't in the Tour and on the last stage into Sallanches, with the wicked hard circuits that definitely won't be in the Tour. One strong point was his TT which while being over 2 minutes behind a flying Brajkovic, was a strong test for the stage 19 TT that is only 2km longer but much flatter.

One thing about Knees also is that he can ride the cobbles fairly well, with 11th place at G-W for evidence, so he will most likely be one of the G.C. men to benefit if there are any splits in the field which could lead him to gain minutes on many men and lead to a better overall performance. With the German champs performance and a new jersey to boot, Knees' form is looking mighty fine for the coming weeks

Prediction: I am going pretty damn bold here and saying 15th overall. He was 20th last year but if his climbing has improved and he can gain time on the cobbles, he could be in for a nice result. I think that he might be a guy that slips into a breakaway that the G.C. men let up the road a bit which could gain him some time. While some of you might say that 15th overall isn't anything, Knees has a very good chance of going for a stage win so that could help his Milram team along and perhaps stave off their impending doom.