Share All sharing options for: Giro Donne: Who can beat Emma Pooley? 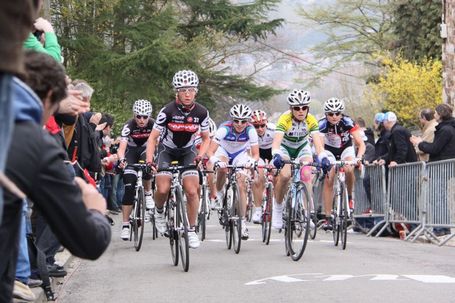 I wanted to start this piece with a really mean looking photo of Emma Pooley, and follow it up with stories of how she paints the faces of her opponents on cute little hamsters and guinea pigs before biting their heads off. Or at least some of the pump in the spokes, ride you into a ditch sort of stories. But the trouble is that I just can’t find anyone saying anything nasty about her. She doesn’t even have a decent nickname. RAI have been calling her La Piccoletta di Norwich (pronounced the Italian way of course, noorr-weech) which doesn’t really sound threatening, but it’s one more nickname than anyone else has come up with. It’s almost as if before vanishing into the distance on the climbs she turns to the other girls and says "I’ll just dash ahead to grab a table at the top." But sometimes even the nice girls get to be the favourites, and she is odds on favourite to win the Giro with just about anyone you ask (apart from Emma herself who swears that she is only there to give support to her teammate Claudia Hausler). So who is likely to be greeted at the top of the Stelvio with a diffident smile, a lukewarm cappuccino, a cornetto alla crema, and second step on the podium. Follow over the page for a rundown of the challengers.

Mara Abbott (riding for the US but we’d all rather see what the monkey version of the US champs jersey is going to look like) must be challenger number one. She was second in last year’s Giro to Claudia Hausler and could have come a lot closer had she been riding for herself rather than for Judith Arndt. She stuck to Emma Pooley’s back wheel all the way up Monte Serra before breaking away to take the stage, and in this year’s Tour de l’Aude it was that same pair who broke away on the two biggest mountain stages. But although they took one stage apiece there, Mara won by a wheel in Osseja while Emma took the line in Roquefeuil by a clear margin. And even if she manages to get ahead on the Stelvio she still has to make up the time she will lose on the time trial. Last year she was 50 seconds down on Emma over just 13km, plus 27 seconds down on the 2.5km prologue. This year there is no prologue but the main time trial is 16.9km, which on past form puts her at over a minute down. Amber Neben should be able to play the superdomestique role as she recovers from the injury she picked up last time she was in Europe, but the rest of the squad, well, they’re good but not Cervelo good.

Evie Stevens (HTC-Columbia) is the one other rider who has been able to keep up with Emma and Mara on the hills this year. She was riding well in the Tour de l’Aude until she slid off her bike and landed on her head, and what’s more she’s just shown that she can timetrial, and won herself a nice new fancy US champion jersey to do it in for the next year. Beyond that we don’t have a lot of form to judge her on; l’Aude was her first ever ten day stage race. Will she still have the legs to climb when they reach the mountains, or was that crash partly due to exhaustion. And will she actually be the nominated team-leader from the start, or just in that "protected, but not the most protected" mystery spot.

Claudia Hausler (Cervelo). My first three picks are all from English speaking countries, so I should point out that the fact that the first German rider I give a chance to I put in fourth spot has nothing to do at all with the football. Oh no no no no. Wirklich. Gerne. Claudia is the defending champion here in Italy, and was third and won the young rider’s jersey in 2008. Given that she did the l’Aude/Giro double last year, she really should be the clear team leader. But if there’s one single reason why I’ve been underestimating Emma Pooley all season, it’s that the Stelvio stage has her name written all over it in very very big letters, so I was convinced that Cervelo would make Claudia their number one almost everywhere else in compensation. But that hasn’t happened, and the official line from Cervelo seems to be that the Giro is Claudia’s race. And the official line from just about anywhere else is "do you think we were born yesterday?" We know Claudia can attack on the climbs as she showed in the last stage of the Emakumeen Bira, but there she caught up with the early break and they all worked together to the end. That Stelvio stage doesn’t look too friendly for an early break, and the only way can see her winning there is if she gets away first, and even then I see Emma Pooley having to soft-pedal to not catch up.

Judith Arndt (HTC-Columbia) may be the official HTC team leader. It’s quite amazing that even allowing for all the recovery time needed to recover from three broken arms (or variants thereof) she still finished last year ranked 10th according to CQRanking. She was on course for a comfortable spot on the podium last year when she crashed out on the penultimate stage, and her 2nd place in the Emakumeen Bira (where she was unable to find anyone to help her chase Claudia Hausler) plus victory in her national TT and second place in the road race last week shows that she’s in form. If only the course wasn’t quite so climby.

Olga Zabelinskaya (Safi-Pasta Zara) is the only other rider I can thik of this year who has been able to fly away from the peloton going uphill, and that was just in one race, the Trofeo Alfreda Binda. Before that she was away from the sport for a couple of years having kids with husband Serguei Ivanov, and since she was knocked off her bike by a car and was said to be riding back from injury. Still two teams, Safi and Fenixs, have been fighting to sign her, so she could be a surprise.

That, in the manner of the Café Tour de France previews, is a good starting five to watch if you don’t know much about the sport. There’s a supposedly full start list up at the main Giro Donne site but it looks very very old. Flavia Oliveira was banned a couple of months back, Eneritz Iturriagaechevarria is out with a broken collarbone, Olga Zebelinskaya spells her name with an a and decided not to join Fenixs, while Rachel Neylan has only managed to sit on a saddle again in the last few days after landing very nastily on her bottom in Spain. If anyone wants to add their own then please feel free to do so.

Photo by Patrick Verhoest. Thanks Patrick!