Cafe Bookshelf: Climbing Down the Ladder of Pro Cycling

Share All sharing options for: Cafe Bookshelf: Climbing Down the Ladder of Pro Cycling

Title: COME AND GONE: A True Story of Blue-Collar Bike Racing in America
Author: Joe Parkin
Publisher: Velo Press
Pages: 180
Order: HERE
What is it? The second half of Parkin's odyssey through all of pro cycling, including mountain biking.
Strengths: Further insight into life on the hard periphery of the world's hardest sport. Quick, fun read. MTB scene ploughs new soil.
Weaknesses: Memorable elements were mostly covered in Parkin's first book, A Dog In A Hat.
Rating: ★★★ (3 of 5) 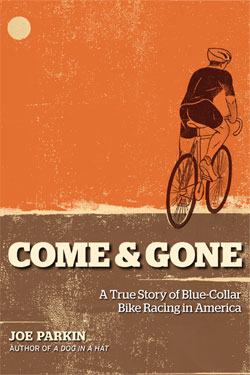 For his second act, author and cyclist Joe Parkin steals a page from the Tom Waits book of life: he's on the way down. No longer loitering with the stars of professional cycling in Europe, Parkin heads back to the US to continue racing, only to endure one indignity after another. He gets nabbed for violating the "yellow line rule" in a race. He is told to submit his cycling resume if he wants a new license. When he finally lands a pro ride, it's for $4500 and some free gear. Eventually, of course, he lands in a southern jail cell.

Nearly two years ago Parkin did with a pen what he couldn't do with his pedals: pluck himself and his exploits from cycling obscurity. In a slight twist on the cycling biography, Parkin's low profile within the sport, at the highest levels of northern European cycling, is what made him stand out as an author, shining the light on some of Cycling's darker corners. Now he's back to illuminate the US road and mountain biking scenes in COME AND GONE: A True Story of Blue-Collar Bike Racing in America. And for a seasoned international pro, it isn't always pretty.

When Parkin came home to join the US racing scene, he brought with him the same assumptions any pro athlete might bring to an assignment in the minors -- that in an apples-to-apples transition from the heights of the sport, he should have no trouble making his mark at the lower level. But it never really works that way, as Parkin, with an appropriate mix of humility and indignation, finds that the US scene isn't really the same game, and his European seasoning doesn't necessarily translate.

OK, so Parkin doesn't literally turn into Tom Waits; he gets out of jail (he was only speeding), resumes a version of a normal life, and continues to transform himself into whatever he needs to be to stay in the cycling game. In his final season as a road pro he even catches a ride on the Coors Light team made famous by Greg LeMond, before embarking on a new life as a mountain biker. None of it works out too spectacularly, but Parkin has success, particularly in his hometown-ish Chequamegon race where he scored two wins.

The book isn't a glamorous work of literature. It doesn't tell of great or important things, and Parkin's writing style is more folksy-straightforward than anything you'll find on the New York Times bestseller's list. He doesn't adorn his tale with linguistic flourishes, and if you don't care about the inner workings of the sport on the domestic road or MTB scene, you'll get bored. Personally, I didn't have this problem, having never read anything of great length about either subject. The MTB world is an especially curious place to us fans of big-time road cycling.

Regardless, there are a couple take-home messages I appreciated. First, Parkin often has the legs to do things in these races, but goes home without too many trophies. Even when he comes back to the US where he could be a star (as opposed to Belgium where his ceiling seemed more modest), things come apart in mundane ways. The message is that it takes much more than physical prowess to win a bike race, and those guys whose names show up at the bottom of the classification are just as likely cut from the same superhuman cloth as the guys we know about; they just lack that little extra -- luck, pack-smarts, a wee bit more sprint, etc. -- that separates out the stars from the watercarriers.

The other memorable insight comes from the book's title, which is also given to the chapter where Parkin stops racing. Whether he intended the subtlety or not, it's an appropriately stark and breezy description of the end of a career. Parkin doesn't plan his retirement from the sport -- only a handful of guys ever really do. The rest keep going along until the offers run out. Scores of cyclists to this day run their final race without necessarily knowing that to be the case until much later, when the phone calls officially go unreturned into the start of the next season and the peloton disappears up the metaphorical road without them. Parkin conveys this sense of how hard it is to walk away, knowing you're good enough but somehow it hasn't worked out. It's not dramatic, it's not even necessarily clear when you've reached the end.