Tomorrow is the Durango-Durango Emakumeen Saria, a one day warm-up race for the Emakumeen Bira based around the town of Durango. Durango is a small town some 30km east of Bilbao in the heart of the Basque country, which would probably be more notorious had Picasso not chosen to paint Guernica instead. And being a Basque town it is entirely natural that the inhabitants would a) put on a bike race and b) make it a climby one. In the past, local legend Joane Somarriba won this race three times in a row, and last year’s top three were Noemi Cantele, Judith Arndt and Emma Johansson. That’s how climby it is.

The photo at the top is taken from Wikipedia, and I wish that whoever posted it had named the hills too. The race itself is fairly straightforward: four laps of an 18km circuit complete with hill, followed by one lap of a longer circuit with a couple of bigger hills (note that the scale along the bottom of this profile is not to scale – even more confusingly the map of the start/finish area includes two number 1’s three number 4’s, five girls leave but only three come back). And anyone looking for a cycling Rosetta Stone should note that the race regulations come in French, Spanish and Basque. 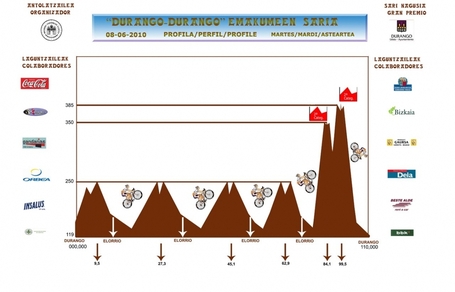 I’ve not been able to find a start list, but if you take the results of Sunday’s GP Ciudad de Vallodilad as a starting point you won’t be far wrong. And expect everyone to race this properly – it’s not uncommon that the winner here also wins the Emakumeen Bira. Video coverage? The local channel EITB will be the place to look.