For the last few years the Giro has started off with an evening prologue timetrial. This year they are trying something different and rather novel looking, namely two city centre circuits joined together. I don’t know why more races don’t do this because it means that people who come to the signing on ceremony actually get to see a bit of racing, and those who turn up at the finish line see the race pass a couple of times too. I’m sure however that the moving forward of the start time to 13:00 will be much appreciated by those who have in the past been unfortunate enough to draw late start numbers and had to race almost in candlelight. 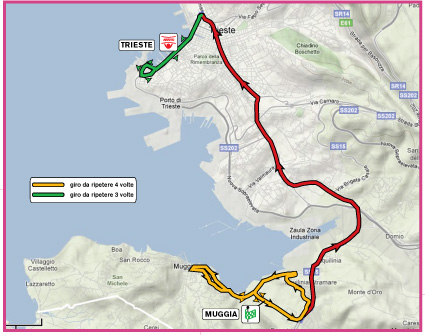 The opening circuit is in the small town of Muggia at the head of the Adriatic and barely a mile from the Slovenian border. This bit of land had a tortuous history during the 20th Century, but architecturally Muggia is completely Venetian which means lots of very narrow little streets, barely wide enough for one bike to pass let alone the whole peloton, overlooked by tall, thin and cramped buildings. From the aerial photos it looks like they are riding alongside the sea as far into Muggia as the organisers dare before heading out again to loop around the out of town industrial estate (where, I assume, the HQ of Pasta Zara lies). They do this four times before heading off to Trieste on the other side of the bay.

Image taken from wikipedia where it appears under a Creative Commons licence that they explain far better than I ever could do. Click piccie for a huge version.

Trieste may only be a few miles distant, but for centuries it was part of the Austrian/Habsburg Empire and the Germanic influence shows in the large, portly and squat buildings sitting comfortably inside ample plazas. Once more the race follows a circuit alongside the seawall, this time for three laps. I don’t know exactly where the finish line is, but the organisers would find it difficult to place it anywhere unspectacular in that panorama.

Today’s race is only 59km, and I can’t see it ending any other way than in a sprint. And as no-one seems to have felt the need to rush off to South America to have some last minute work done on their smile the startlist includes all the big name sprinters. That means the big favourites will be Ina-Yoko Teutenberg and Kirsten Wild, but don’t overlook Rochelle Gilmore, Giorgia Bronzini, Marianne Vos, Shelley Evans, Rasa Leleivyte and Alesssandre d’Ettorre. Unless some brave soul tries to take on all those eight teams in a suicide breakaway. Here’s the latest version of the full start list (pdf document) if you still haven’t entered a fantasy team.