What is it? A visit to the Alps with a mountain top finish. What's not to like?
Got Climbs? But of course! Two category 1 climbs, the Col de la Ramaz and Morzine-Avoriaz.
Yellow Jersey Battle: It's on like fire.
Ideal Rider: Can anyone beat Alberto Contador when the road turns uphill? That is the question of this year's Tour.
@Gavia: July in the Alps, it must be the Tour de France. Pass the espresso, we've got bike racing to watch.

Departing from Station des Rousses, the Tour heads south with the grain of the Jura mountains along the border with Switzerland. The course loops around the tail of Switzerland near Genève before heading east into the Haut Savoie region of France. The climbing comes at the end of this one, and the Col de la Ramaz, the short climb to Les Gets, and the final hop to Morzine-Avoriaz are all stacked up one after the other. The most recent visit of the Tour to Morzine came in 2003. Richard Virenque attacked on the Col de la Ramaz and survived to win the day at Morzine. He also took over race lead. All over France, housewives danced naked in their living rooms in celebration. Or so I'm told.

The Tour organizers hope to hold the race in suspense until the final week's double ascent of the Col du Tourmalet. Consequently, they've designed these early mountain stages as indecisive teasers. The final climbs, the Col de la Ramaz and the climb to Avoriaz, are not easy. The Avoriaz includes a kilometer of 11% gradient. (The average gradient is a somewhat misleading 6.1%. Much of the climb is in the 7% range). There will be time gaps on this finish, but the battle among the bigs should remain tight. One of the early favorites will likely be several time zones out of contention by the end of this stage. Which one? I don't pretend to know. The general classification battle is on with this stage, and it should be a hard-fought race to Avoriaz. 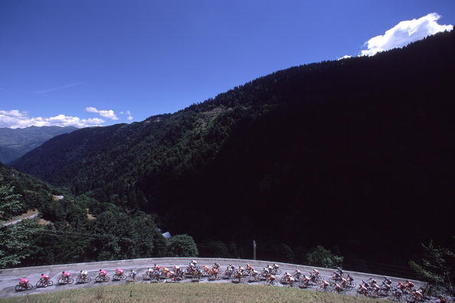 Alberto Contador's Astana team put the screws to the Tour de France today, and Lance Armstrong's historic run of luck (and other qualities) finally ran out, as the American all-time champion crashed twice and lost all hope of a podium place in the process. Andy Schleck had the last laugh, with a late move that gained him the stage win and nine seconds over Contador, who had covered one too many small attacks to follow Schleck. Sammy Sanchez went with Schleck and got pipped at the line.