The mountains are all over, so barring any real disasters the final top 3 of this year’s Giro looks to be Mara Abbott, Judith Arndt, Tatiana Guderzo.

But the Giro organisers have done their best to avoid the whole of the last stage turning in to a lap of honour by starting with a pretty clearly definied lap of honour bit to the course, namely three circuits of the Monza race track, sadly on the modern racetrack and not the really cool old banked one, before heading out into the nearby countryside for a loop of 115km which in profile resembles stage 61 (the one that everyone thought was going to be fairly flat), returning to Monza to finish in front of the old Hapsburg Villa Reale. In the circumstances, with the US looking to protect Mara, HTC doing the same for Judith and maybe looking for a fifth stage win for Ina-Yoko Teutenberg, and perhaps Cervelo wanting to set up Kirsten Wild to claim one sprint, we might expect the race to stay together until the end, but there is also the fact that so far there has not been a single Italian stage win, so there could be some unexpected alliances. Noemi Cantele has been awfully quiet so far, and Eleonora Patuzzo might be looking to show that she can do more than just get round. The game’s not over yet.

Meanwhile, let’s have a quick run through of the pre-race favourites have done, and (because the bosses here like to speak of accountability among their minions) how our predictions turned out. My final positions are based on the GC after stage 9, but as you have to go right down to Carla Ryan (Cervelo) in 19th position and Marta Vilajosana (Fenixs – Petrogradets) in 20th before you find two riders within 30 seconds of each other I don’t expect any changes at the top. Click through for the rundown.

Emma Pooley (Cervelo). My prediction 1st, final position 5th @ 6:53. Almost 5 minutes (4:57 if you want to be picky) of that loss to her main rivals came on stage 7 where she was unfortunate to puncture just after the US had decided to race to the bottom of the Sormano, so without that piece of bad luck she would have been in second position. But why was no-one on her team beside her to give her a wheel and help in the chase back? Surely all four of the other Cervelo women weren’t assigned to protecting Claudia. Even so, she never looked likely to beat Mara in the mountains, so maybe her form is sliding just a little bit.

Mara Abbott (US National Squad). My prediction 2nd, final position 1st. Mara has looked better all round in this race than she ever has before in Europe. She’s been the best climber by a comfortable margin, and can put in a good kick towards the end of these very long and nasty climbs. Prior to this race I hadn’t rated her descending that much (she was OK if she had a wheel to follow, but a lot ropier when she had to pick her own lines), but she comfortable got away in the run-in to Livigno. And while she’s still not a great time-trialler, she didn’t lose a disastrous amount of time there. I was a little disappointed when Mara decided not to race in Europe with HTC-Columbia this year, returning instead to the US, but had she been riding for HTC then this race would have been a lot duller. I still think it would be good for the monkey to venture a bit further afield next year.

Evelyn Stevens (HTC-Columbia). My prediction 3rd, final position 15th @ 41:01. OK so she never really was the HTC GC rider, but she killed herself on stage 7 on a long solo ride to get a win for herself and give her captain an easy ride in preparation for the two nasty mountain stages, so it has been a pretty successful Giro for her. There are some mixed reports on her descending ability, so we’ll leave analysis of that for another time.

Claudia Hausler (Cervelo) My prediction 4th, final position 4th @ 5:29. I reckon that Claudia made a deal with Cervelo last autumn when she took the spring off to finish her studies: because she was starting the season so late she would just have one personal aim, the Giro, and ride in other races in support or to build fitness. It’s nice in some way that everyone at Cervelo seems to have tried to stick to that deal, even when it has been clear ever since the race route was announced that it was far more suitable for her teammate Emma Pooley. The lesson for next year, I suppose, is share out the races after you know the routes.

Judith Arndt (HTC-Columbia). My prediction 5th, final position 2nd @ 2:08. It’s good to see that Judith is back to form after a really terrible 2009, and second is probably better than she expected in such a mountainous Giro.

Olga Zabelinskaya (Safi-Pasta Zara). My prediction 6th, final position 9th @ 23:03. OK Zabelinskaya was something of a wildcard pick, rather than going for the next obvious name of Tatiana Guderzo, and 9th is better than I expected. If anyone ever tells you that women can’t descend, show them the last bit of this video of stage 6, where the camera moto just can’t quite accelerate fast enough to get out the way.

The one we missed: Tatiana Guderzo (Team Valdarno) finished 3rd @ 3:05. OK I screwed up in not picking an Italian to do well in the GC, but I expected the mountains to be a bit too much for her. Actually the whole of Valdarno impressed, with three riders in the final top 10.

And my five youngsters to watch:

Elena Berlato (Top Girls Fassa Bortolo - Ghezzi) 10th @ 25:47, 2nd in young rider competition. Second for the second year running, but this time to Marianne Vos, her Giro has been very respectable. And next year Vos won’t be eligible.

Tiffany Cromwell (Australia National Squad). 23rd @ 57:33. The fact that only 24 riders are still within an hour of Mara Abbott should tell you how tough this Giro was. According to teammate Lisa Jacobs it looks like Tiffany had a couple of bad days just as the race hit the mountains. I still reckon, judging by the performance of all the Australians in this race, that they are using every single race before the Worlds in Melbourne as part of some super training programme meant to peak then.

Eleonora Patuzzo (Safi - Pasta Zara) 62nd @ 2:05:06. Eleonora crashed on the final descent on stage 5 and I haven’t seen her since. DS Diana Ziliute talked about this race being good experience for her. More a name to remember for the future, perhaps.

Ashleigh Moolman Pasio (Lotto Ladies Team) 17th @ 42:37. And excellent proof that if you want to get noticed outside the peloton then start a blog and write a bit about your race. And twitter too. I only put Ash forward as a name to watch on the basis of her own reports from the Emakumeen Bira where her averageish result appeared to be largely down to crashes and other bad luck, and I've been delighted to see her keep in touch with the leaders right up until the Stelvio stage. I suspect that this race is the longest she has ever done, and by quite a few days. It will be interesting to see how she performs in the shorter, late summer stage races.

And beyond that, congratulations to the 98 riders still on the road for getting this far. We haven’t lost nearly as many as I expected, and it’s interesting that the one voice I’ve heard suggesting that perhaps this race has been too difficult has been a man, Brunello Fanini, manager of team Michela Fanini Record Rox. Others such as Edita Pucinskaite and Marianne Vos have loved it and only regretted that they weren’t quite good enough to win. And congratulations too, to all at Cicloweb for their excellent coverage of the race. And thanks for tolerating my ramblings. 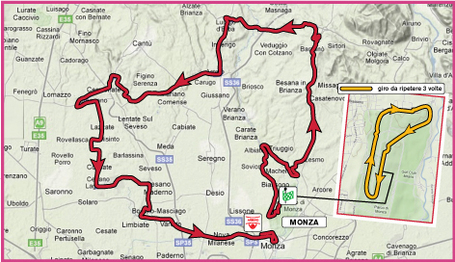 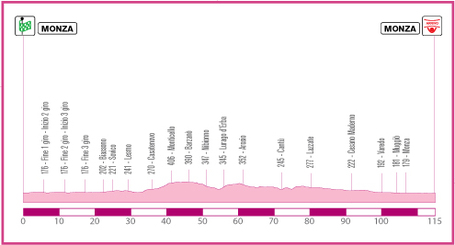