What is it? Many much mountains. Descending finish.
Got Climbs? Four major climbs, including the Col de la Madeleine. Hors catégorie, baby!
Yellow Jersey Battle: The Col de la Madeleine should split the bigs, but the col summits 30 kilometers from the finish. The race may well come back together by the finish, but it could take some hard chasing to make it happen.
Ideal Rider: Linus Gerdemann. The bigs will likely give Gerdemann space to ride as he's not likely to wear Yellow in Paris. Gerdemann, he's a determined rider and he can race well in these high mountains. His first Tour stage victory came in the Alps in 2007 with a finish on Le Grand-Bornand. Why not another?
@Gavia: I always like a downhill drag race.

More, below the fold.

It's a classic stage in the Alps with four solid climbs on the menu: Col de la Colombière (cat. 1), Col des Aravis (cat. 2), Col des Saisies (cat. 1), and Col de la Madeleine (HC). Running from Morzine-Avoriaz to Saint-Jean-de-Maurienne, this stage offers a long hard day of racing. It's all up and down, though the road flattens for a short stretch as it passes through Albertville on the way to the Col de la Madeleine. The general classification teams may let an early break survive to the finish, and certainly anyone with an interest in winning the mountains classification will join it. Mountains points, nom nom nom. A crafty sprinter might also choose to ride the break in the hope of snapping up the points in La Bathie. There's more than one way to win the Green Jersey, though riding a break through the high mountains is definitely not the easiest way to go about it.

In keeping with the Early Mountain Stage Suspense theme, the day's final climb, the Col de la Madeleine, summits 30 kilometers from the finish line. The climb will likely open up plenty of splits in the field, but the long drag to the finish leaves plenty of space for it all to come back together again. There's a screaming fast technical descent off the Madeleine, then just over 10 kilometers of mostly flat racing to the finish. If the finish came closer to the descent, this stage would be made for speed demon descender Samuel Sánchez. But 10 kilometers is still a long way to go. Though the gaps at the line may not be especially large, this finale promises hard racing. The splits will open up on the final climb and set the stage for a high speed drag race to the finish. 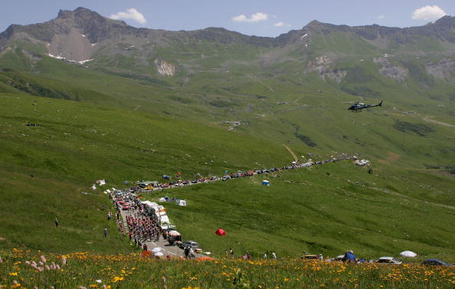 Know Your Tour: It's All Downhill