What is it? A wacky bumping thing with a descending finish.
Got Climbs? Two short steep bits of nastiness.
Yellow Jersey Battle: This is breakaway territory, and the bigs will want a break to go early and stay out there. The roads around Gap are a tricky business, and it's a tempting finish for the badass descenders.
Ideal Rider: Thomas Voeckler. It's Bastille Day, after all!
@Gavia: Phew, that Col de Madeleine thing was a doozy. No rest for the weary, here, though.

Results, links and whatnot, clicky...

The stage unfolds in the shadow of the Alps. Though not a mountain stage, the Tour races over narrow tricky roads between Chambéry and Gap. Two main climbs dominate the proceedings, the category 1 Côte de Laffey, which summits at kilometer 77, and the Col de Noyer which summits at 144.5. It's all up and down, and this stage is harder than it looks on paper, especially after the trip through the previous day's trip through the high mountains. The descent into Gap follows the same road where Joseba Beloki suffered his wrenching, career-ending crash. (I'll leave it to you to find the video if you care to see the replay. I'll pass.) 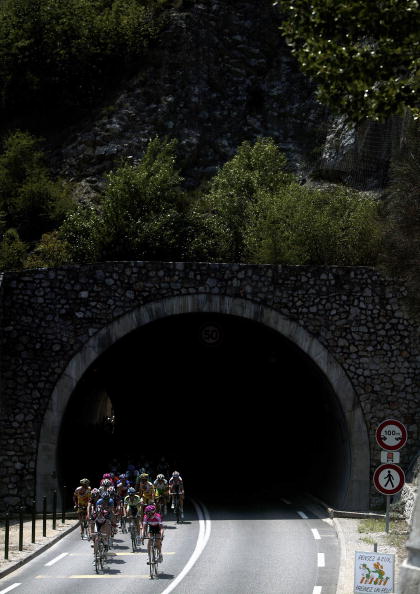 After two stages in the Alps, there will be plenty of riders well out of the general classification battle and they will be looking for the long breakaway. Expect lots of French names in the break, and this stage should be won by one of the escapists. Behind, a talented descender like Samuel Sánchez could try to snatch an advantage, and we might see a tussle among the bigs on the roads between the Col de Noyer and Gap.

Sergio Paulinho of RadioShack won the stage after a long day out in the break. The bigs declined to do much in the way of racing today, and it was a long slog over hte hot roads of Southern France. Andy Schleck continues in the Yellow Jersey, followed by last year's winner Alberto Contador. Jérôme Pineau, meanwhile, picked up enough mountains points to take back the Polka Dot Jersey. Andy Schleck leads the Young Riders classification, though Robert Gesink continues to wear the jersey as Schleck is in the Yellow.

Hot and Cold in the Alps!

Know Your Tour! So the King of the Mountains is *That* Guy?