Know Your Tour! Stage 10: So the King of the Mountains is *That* Guy?

Share All sharing options for: Know Your Tour! Stage 10: So the King of the Mountains is *That* Guy? 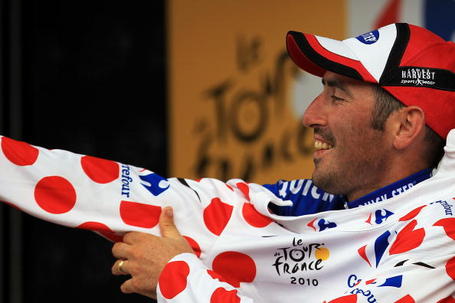 Today Anthony Charteau of team Bbox Bouygues Telecom came in with the lead group after being first over the summit of the Col de la Madeleine, and as a consequence he drew even with Quick Step's Jerome Pineau for the King of the Mountains title, or mailleur grimpeur (best climber) by its French name. Thanks to the Tour de France's tie-breaking system Charteau will emerge from the Alps wearing the kit of the best ascender in the world's biggest

race. So don't quibble with the fact that Charteau is 31 and has never finished in the top 100 of a Grand Tour. And don't bother fretting about Pineau's record; he's finished as high as 27th in the Tour, albeit seven years ago, and was a robust 87th last year. Forget all that. Forget Contador and Schleck. These guys are the best. The Polka Dots have spoken.

OK, well, the grim reality is that the KOM competition at the Tour de France is in dire straits. To the chiagrin of anyone old enough to remember Bernard Hinault, Luis Herrera, Gert-Jan Theunisse and other true climbing stars in the jersey, the modern state of affairs has devolved into a tainted, pointless sideshow. The tainted part might not be around to stay -- just because the last several winners have all been touched by scandal doesn't mean that a new, clean set of winners isn't about to emerge. So set that aside for now. The real culprit threatening the majesty of the great maillot a pois is the rules themselves.

First a bit of history. There were many days when the King of the Mountains was truly worthy of a throne. Frederico Bahamontes, the Eagle of Toledo, is tied for second all-time with six KOM classification wins with Lucien Van Impe. Both men won a single Tour and were renowned for their climbing skills. Other multiple winners include Fausto Coppi and Gino Bartali, of Coppi e Bartali fame; Charly Gaul, the Angel of the Mountains; Eddy Merckx, the greatest cyclist ever; and other distinguished guests.

As recently as the early 90s the jersey was contested by some of the top contenders. In the mid-90s Richard Virenque started his historic run that made him the all-time classification leader, while Virenque was still a contender for yellow (before becoming the poster boy of the 1998 Festina doping scandal). Michael Rasmussen was one of the more infamous recent winners, but was an overall contender, as was Bernard Kohl. Both of them earned two-year holidays shortly thereafter for their moral failures. However, save for this handful of heavily-asterisked exceptions, recent winners have come from, oh, the C-list of Tour contenders. All because of some simple, easily repeated strategic calculations.

First, the yellow jersey contenders have a number of reasons to keep their eye on that prize, even if it means taking your eye off the spotted one. That number starts with €450,000 and doesn't drop off too steeply, so that a rider's interests are actually better $erved by finishing fifth on general classification (€50,000) than first in the KOM. The prestige is probably along similar lines.

Second, the on-the-road reality of the modern Tour is that major mountain stages are almost never won by the big contenders before the final climb. If they're won earlier, it's by guys who are allowed to escape. When real Tour contenders have jumped on an earlier climb, the results haven't usually been good. Unless you have the strongest team and plenty of help, chances are you'll get caught either before or during the final climb and your rivals will be the ones with cards to play at the end of the stage. It can be done, but it's not at all the safe play.

So if you're outside contention for yellow, the road is yours for the taking prior to the final climb. And there's no trick to being outside contention -- if you think anyone is at all concerned about you winning, you just find an inconspicuous place in an early stage to drop ten minutes, and you're in position to attack. The question then is where.

Virenque patented a strategy where he would attack alone very early on the Tour's first stage featuring a lot of early mountain points. In 2004, Virenque set off on stage 10, from Limoges to St-Flour, on a stage with nine rated climbs. He took first over every climb and eventually won the stage by over five minutes, because the stage profile was as thoroughly uninteresting to the GC contenders as was Virenque himself. Now, obviously any time a rider wins a solo stage he's done a great ride, and if another KOM contender couldn't track him down, they have nobody to blame but themselves (or Virenque's doctors).

The issue is that minor climbs happen everywhere, and consistently picking up points is as meaningful to this classification as it is to the green jersey. KOM points are graded as follows:

That last bit is big news. Today Charteau scored a whopping 40 points by sprinting for the line on the Col de la Madeleine, even though the race wasn't won there. With a long stage attack a rider can pick up 75-100 points in a single day. That Virenque attack in 2004 was worth 68 points, on a minor mountain day. By getting points here and there for the rest of the Tour, Virenque won the jersey with 226 points, with only an indifferent Lance Armstrong within 100 points of his total.

So the polka dot jersey isn't really the meilleur grimpeur. It's a the best climber of a specific group of guys with the ambition and permission to focus on the minor climbs of the Tour, with no regard to their fitness for other tasks. It's a guy who isn't a yellow jersey contender, and who isn't on a team with a yellow jersey contender who might need his help. It's a small, self-selecting goup of guys who can surely climb like the dickens, and whose pursuit of the King of the Mountains classification is a fun sideshow. They get to be King for a few days, and only wishing that the competition were something more prevents fans like me from getting behind this more enthusiastically.