What is it? Sprinty!
Got Climbs? One early climb followed by a long descent to the flat finish.
Yellow Jersey Battle: Chillin'
Ideal Rider: Alessandro Petacchi. This one's for the sprinters.
@Gavia: Waiter! Waiter, there's a sprint in my mountains!

Results and More, below the fold!

An early climb starts off this stage between Sisteron and Bourg-lès-Valences. It's only a category 3, and shouldn't cause anyone too much difficulty. A long downhill drag follows the climb and offers plenty of road for the sprinters' teams to chase back the early break. Though the Alps may have sapped some of the sprint from the legs, there should still be plenty of speed left in the race. Oscar Freire, Tyler Farrar, Thor Hushovd, and Mark Cavendish have all previously made the finish in Paris, and should be ready to chase stage victory here. 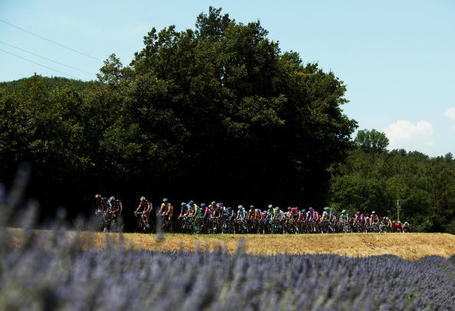 Cavendish Wins in Controversial Sprint
Another long, hot day on the roads of France ended in familiar fashion, with Mark Cavendish blasting the field in a sprint, notching his third victory of the Tour de France. Alessandro Petacchi snuck past Thor Hushovd into the Green Jersey with his second place, while Tyler Farrar got a bit stuck in traffic before finishing third. There was a wee bit of controversy in the sprint... Read More

Renshaw Disqualified from Tour after Irregular Sprint
The Tour commissars decided enough was enough. Mark Renshaw has been disqualified from the Tour de France, becoming the first rider to leave the race in eight years (excepting doping-related exclusions.) In the final kilometer, Julian Dean tried to bring his sprinter Tyler Farrar up to the front, and moved into Renshaw's space. Renshaw reacted by head-butting Dean three times... Read more, and check out the viddy replay

Know Your Tour, Time to Raise the Bloody Banner

Is Armstrong lying about team ownership? Have your say.