What is it? All up and down with a steep uphill finish.
Got Climbs? Several, including the Montée Laurent Jalabert in Mende.
Yellow Jersey Battle: The final climb is short, but it pitches up to 10%. Positioning is key, and the light climbers with hops will have the advantage. Expect some gaps at the finish, though they probably won't be ginormous.
Ideal Rider: It's hard to argue against Alberto Contador, but Andy Schleck or Cadel Evans, who won on the Mur de Huy, could give the Spanish climber a run for it.
@Gavia: A hot hilly romp through Southern France... Pass the popsicles!

The Tour turns west with this stage running between Bourg-de-Péage and Mende. There are scarcely any flat sections on the profile that includes five categorized climbs. Though none of the climbs are necessarily difficult, the stage is long. We're also deep in the South of France, and the weather could be quite hot.

The stage finishes in Mende with a three kilometer climb that includes gradients up to 10%. The finish line sits at the top of the Côte de Croix-Neuve, which carries the name of Laurent Jalabert in celebration of his 1995 Bastille Day victory. Jalabert won four Tour de France stages during the course of his career, and in 1995, Jalabert finished fourth in the general classification, his highest ever placing. The Montée Laurent Jalabert is short but steep. It suits the climbers who can accelerate on the steep gradients, and the diesel riders could lose time on this finish. When Paris-Nice visited the Montée Jalabert earlier this season, Alberto Contador danced away from his rivals. It should be a small group at the finish, and it's almost certain that the final climb will open up splits in the field. 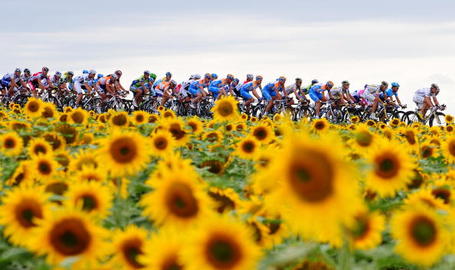 Rodríguez Wins in Mende, Contador Warns Rivals
Today was another nod to the Classics, as the Tour ended in Mende with an exciting few kilometers where the top climbers separated themselves once again. Alberto Contador was the main story, managing to distance Andy Schleck on a climb for the first time in this year's Tour, while countryman Joaquim Rodriguez of Katusha went with the defending champ and took the sprint for the win. Read More!

Know Your Tour! Caught in the Crossfire