Share All sharing options for: Cavendish Confirms In Stage 11; Petacchi into Green 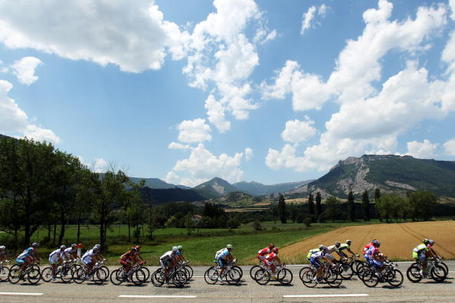 Another long, hot day on the roads of France ended in familiar fashion, with Mark Cavendish blasting the field in a sprint, notching his third victory of the Tour de France. Alessandro Petacchi snuck past Thor Hushovd into the Green Jersey with his second place, while Tyler Farrar got a bit stuck in traffic before finishing third. There was a wee bit of controversy in the sprint, where Cav's leadout Mark Renshaw 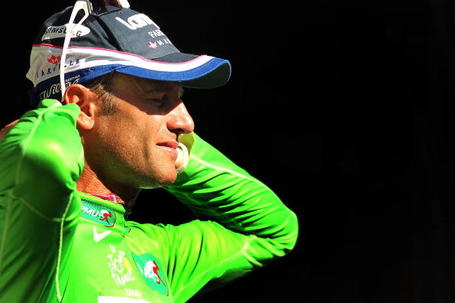 head-nudged Julian Dean in the run-in, and then moved off his line to close the door on Tyler Farrar after launching Cav to victory. However, there was no doubt that Cavendish had the stage in the bag, so whatever went on isn't too important.

There was some action in the last 20km when the prospect of crosswinds caused Saxo Bank to get on the front and drill it in impressive fashion. All the big names showed their attentiveness and no great damage was done, unlike last year when Alberto Contador and others fell asleep and lost just under a minute on a similar stage.

Results, below the fold.

And the green jersey standings now: