Know Your Tour! Stage 12: Caught in the Crossfire

Share All sharing options for: Know Your Tour! Stage 12: Caught in the Crossfire 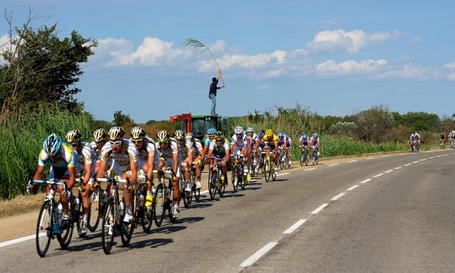 This is more a commentary on stage 11, where we saw a bit of late action thanks to the Tour de France coming into some crosswinds. Textbook example #1,624 why winning the Tour is more than going up or time trialing quickly. Among the obstacles we've seen in this Tour, over which any hopeful must navigate successfully, have been oil in the road, concrete pylons, dogs, reckless riding, cobblestones, mountains, and slippery descents. Now comes another -- unseen -- hurdle. The wind.

Everyone knows that the wind in your face is the reason drafting makes cycling into a team sport. I wouldn't ride so close behind you if it weren't saving me 30% of my energy output. Headwinds are the worst. Tailwinds are a gift from the gods of cycling. Crosswinds, i.e. winds perpendicular to the direction of the race, are either, depending on your perspective.

Simple physics: crosswinds blunt or totally defeat the effects of drafting, depending on their intensity and your position. If you're traveling west at 30mph and the winds are out of the north [and a man gets on a train traveling east 20 minutes later... no, never mind], then the wind won't feel like it's on your right hip, thanks to your movement; it'll feel more like it's coming from the northwest into your right shoulder and neck. In order to get sheltered from the wind and enjoy a good draft, you have to sit behind someone at an angle which places them directly northwest of you. Riders catch on and form echelons in a diagonal line across the road... but you usually run out of echelon room after about 5-10 riders, depending on the conditions, so everyone else has to start another echelon or lump it in the wind.

Crosswinds are legendary in the northern classics races in Belgium. I can tell you from experience that the wind blows hard from the southwest in Flanders in April, and there aren't many trees or landforms to slow it down. Roads are impossibly narrow, so what looks like a flat race turns out to be a truly hard day in the saddle. Crosswinds are less a feature of the Tour de France, but it was only last year that we saw them affect the Tour, breaking up a stage and Team Astana in the process.

On stage 3 to La Grand Motte, a bit south of today's stage, a late crosswind caused a split in the peloton on what seemed like an ordinary flat stage. Riders knew it was coming, and the smart ones accelerated toward the front of the peloton in order to not get left behind. The simple reason is that a Tour de France peloton doesn't organize to deal with crosswinds the way a Belgian classic might. The effort of the big teams to get their men in place usually causes an acceleration -- the battle for 50 guys to get in the top ten is won on speed and nerves alike. But plenty of riders in a Tour peloton on a flat stage don't care about their position enough to organize, so when the front accelerates in a crosswind, after the favorites the race will often line out single file behind. With a crosswind, everyone in that line is going full gas to stay in contact, and as soon as one of them cracks, everyone behind that person is doomed.

Last year on Stage 3 Alberto Contador was one of the guys left behind. You can debate the team's strategy for leaving one of its leaders in the dust (and wherever Lance is mentioned, people will debate). But the fact is that Contador was caught napping and paid a price -- 41 seconds, small stuff in hindsight. Today the crosswinds hit again, but this time Contador was ready. So was Saxo Bank, who put their top pacemakers on the front, including Fabian Cancellara, the ultimate pacemaker. So were the Shack boys, the Euskaltels, the Rabos, the sprinters, everyone who had a stake in finishing at the front. The tactics of dealing with the crosswinds really enlivened another march to a Cavendish win, even if the results were no mistakes of note and no headlines.