Know Your Tour! Stage 13: A Man Needs A Maid

Share All sharing options for: Know Your Tour! Stage 13: A Man Needs A Maid 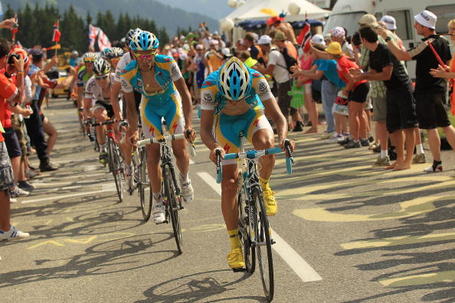 Domestiques, a/k/a the helper teammates who are the lifeblood of any grand tour squad, regularly perform a wide range of functions, many of which have been rather openly on display at this Tour de France. A non-exhaustive list:

And on it goes. The purpose of all this is that domestiques save their captain from expending energy, by blocking the wind and by helping clear a route for their man to get in the most advantageous position when the action goes down. By saving the leader the trouble of going back for his own bottles, and having to hammer up to the field again when he's got them. The point is to give the guy an armchair ride so that when it's time for the climber to climb or the sprinter to sprint, you get his level best.

But there's more to this relationship... on the jump.

A domestique's willingness to sacrifice his body in unthinkable ways isn't about chivalry, it's real life. When Contador wins, Astana wins. Prize money goes into the pool and is distributed to the team. Guys like Daniel Navarro pay their mortgages on the strength of Contador's success, after having helped that success come about. Astana's sponsors take note of the return they're getting on their investment, and the team's sponsorship future becomes a little (or a lot) more secure. Navarro's brilliance, meanwhile, doesn't go unnoticed by other teams, and when his contract is up he can either field offers or at least use that notoriety to seek a raise from Astana. Domestiques don't just lay down their lives for no return -- they do a job like they're paid to, and get rewarded in return.

And an awful lot of them do it extremely well. Just about every domestique you can think of was a huge success, even a star, for his entire life prior to reaching the top rung of cycling. Some of them were even stars in the top rung, if briefly: Mark Renshaw was a protected sprinter for Credit Agricole before becoming Cavendish's main man. George Hincapie is one of the most decorated riders in American history. And for every one of those guys there's a handful of Maxime Monforts, guys who haven't achieved stardom as a team leader but who came up billed as a potential ace. Despite the subservient name applied to their job, these guys are a big deal in their own right, if outshined by someone else in the Tour.

One element of successful leadership is the depth to which a Contador can appreciate what I've described above. The sport has a long history of talented guys who didn't quite win the races people expected because they weren't leaders and couldn't secure the loyal assistance they needed. Conversely, many leaders are great teammates. They not only say nice things about the work their teammates do to help, but they genuinely internalize the significance of the sacrifices being made around him. Good leaders don't just say thanks to their helpers; they carry around the need and desire to win out of duty to the guys who make it possible. Leaders say how much it means to be able to come through for the guys on the team, not just for their own ambitions. They owe those guys for their sacrifice, and do everything they can to repay that debt. This little fairy tale doesn't always prevail; teams are sometimes riven by jealousy and bad blood. But most of the time when guys say it's a team sport, that statement carries much more meaning than it appears to.