Things have gotten extremely interesting this week in the Points Comp Smackdown, as a God and a Jet have it down to a two-man race. Unpredictable, yes, but we knew all along that somehow this would be an awesome maillot vert year, at long last. Let's dive straight in:

If Hushovd doesn't go on a mid-mountain points rampage and Petacchi makes it over the mountains intact, Ale-Jet is probably the biggest threat to Hushovd... Petacchi's campaign is more plausible and easier to predict... which is why Petacchi's presence virtually guarantees that Hushovd will make a move in the mid-mountains again. He has to.

And Now? Petacchi's claiming of the green fleece yesterday spurred on Hushovd's early attack today, when he snuck away from the vertically challenged and bagged a couple intermediate sprints and an extra ten points, to vault back into the lead. And yet I have Petacchi ranked first.

This is not a shot at the guy (attn: Holdenmate!): I'm not a big fan but I have a healthy respect for Hushovd as a rider, particularly in my beloved cobbled classics. It's simple math. On the big sprint stages, Petacchi has tended to put about ten points into Hushovd, by winning or finishing top three while Hushovd finishes in the 5-7 range. There are two more of those sure sprint stages left, which puts Petacchi in green for sure, possibly by anywhere from 10-20 points. So Hushovd has to find those extra points someplace, either in more intermediate sprints or at the line on a day when Petacchi gets lost. In stages 18 and 20 Petacchi and any other contender could actually jump Hushovd for those intermediate points; we'll see. The big question, then, is whether Hushovd can use tomorrow to get completely away from Petacchi and take points on a day when the Italian isn't there at the end. If he does that, it's over, Thor wins. If not, Hushovd will have to take intermediate sprints on several occasions in the Pyrenees to pad his lead enough for it to stick. 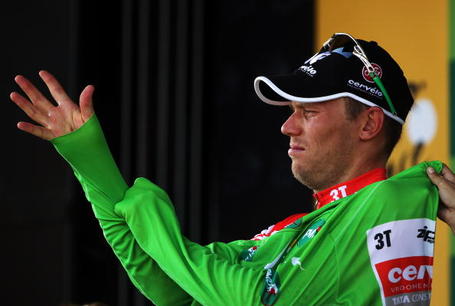 Does this thing fit?

I'm going to go out on a limb and say that he can't just finish fifth (or worse) in the sprints and win the green jersey. Now, Hushovd is still capable of an actual sprint win (not the easy one he got on Tuesday), but it's not all that likely. And if Cavendish is back, and Petacchi is back, and Ciolek and Boasson Hagen are flying, then Hushovd's daily point opportunities could shrink to the point where he is in fact vulnerable.

And Now? Despite my current rankings, the fact is that this race is a complete tossup. Hushovd benefits slightly from Tyler Farrar's withdrawal today, and if a few more sprinters step off the bike, there simply won't be as much traffic between him and Cav-Peta 1-2 on the big sprint finales. Which totally blunts Petacchi's advantage (and Cav's too). I'll stop now before I talk myself out of the ranking, and only because I don't have time to rewrite it.

Cavendish needs to go on a big-time winning streak, as there are absolutely no more than five sprint stages remaining. We haven't had a breakaway succeed, which means that the pressure will keep increasing on HTC-Columbia to preserve those sprint opportunities as the pack grow collectively tired of chasing day after day. They eventually will let a group stay away, they always do.

And Now? Assuming he wins in Bordeaux and Paris, Cav still needs a few more points to win green, and that assumes Hushovd is stuck in the barn in those early stage sprints. Will Cav give up and just focus on the stages, or will he unleash his formidable army of a team to help chase those intermediate points and block Hushovd? This could get very interesting, IF Cav plays. If not, it's just Hushovd taking pot-shots at Petacchi and seeing if they add up.

I'm not seeing any route into green for the plucky Aussie. He barely outsprints Hushovd in the bunches and he's dead to rights everywhere else. Great guy, cyclist, etc., but this is a ride for a good payday, not green glory.

And Now? Same as Cavendish but without the ability to win the stages, which makes me think of him as a bystander to the upcoming action. A very cool, informed, outspoken bystander.

Like McEwen, he may be better than Hushovd in the sprints, but not by enough for me to take his chances of winning seriously... He'll almost certainly wind up in the top 5, he's very consistent.

And Now? Nailed it! I'm not sure top five is any magic number, given that after the podium the rest of the guys aren't exactly part of the final play. Rojas is racking up prize money but can't be taken seriously this year for a green jersey campaign anymore.