Know Your Tour! Stage 14: Has Lance Won Yet?

Share All sharing options for: Know Your Tour! Stage 14: Has Lance Won Yet?

Earlier today Lance Armstrong of Team Radio Shack strolled casually across the line to finish the day's stage 4:13 behind winner Alexandre Vinokourov and a full four minutes behind his brief rival Alberto Contador. This marks the first time in Armstrong's post-cancer history that he's taken a stroll through France on a bike in July. Even last year, at the age of 37, Armstrong was in nearly full cry in pursuit of a spot on the final podium. Now he's outside the top thirty on general classification and doesn't seem overly troubled by it. Lance is letting go, so I assume we should too.

Personally, I am probably about as relieved as he is. As we discussed a year ago in an essay of mine, talking about Lance is a complex matter and it's easy to devolve into cheeky nonsense like the headline to this story. Not because I don't like the guy -- I was as rabid a fan as they came a decade ago -- but because, well, I would just rather talk about something else these days. The Lance Era was long, glorious, and consuming, so for me it's just more fun to talk about more current trends in the sport.

With the sun setting on the Lance Era, once and for all, a really, really fun topic for me is to talk about who the next American winners will be. Not necessarily of the Tour, but winners in a more general sense. Let's take a look at a few names which you may or may not know, and I also invite anyone with a deeper knowledge of the up-and-comers on the US scene not named here to add to the list.

OK, you have almost certainly heard of Farrar, and in reality he's not so much of an up-and-comer as opposed to a guy who's arrived. However, in some ways Farrar's career is still developing. At age 26, Farrar is an established sprinter, possibly the second-fastest man in the world after Mark Cavendish. However, his true love is the spring classics in his adopted home of Belgium, and the Wonder of Wenatchee (Wash.) just completed his first real go at them, finishing an astounding fifth in the Tour of Flanders, ninth in Gent-Wevelgem (thought to be a better target for him), and winning the Scheldeprijs as well as a stage of Driedaagse de Panne. Tom Boonen and Fabian Cancellara aren't looking over their shoulders just yet, but next time around Farrar won't just be relying on his strong legs and all-round ability, he'll have some experience to boot.

OK, now we're getting into the kids. Phinney, son of two of the most decorated riders in US history (Connie Carpenter and Davis Phinney), is a mere 20 years old and still learning his way around the road scene... as he racks up victories. Phinney is a two-time world track pursuit champion already, a good indicator of pure power and sprinting ability. He's also a double winner of the Under-23 Paris-Roubaix, joining names like Stephen Roche (world champion and Tour winner, 1987), Marc Madiot (double-winner of the senior Paris-Roubaix classic), Thor Hushovd (green jersey winner, elite sprinter and classics rider), and others, nearly all of whom went pro. At 6'4" tall Phinney won't be flying up the Alps in the Tour very often, but he could be a top classics contender in another few years after chasing his track goals in the 2012 Olympics in London.

The "Houston Rocket" has already made a pretty big splash on the juniors scene, sweeping the disciplines at the US Junior Nationals and coming in third in the Juniors Paris-Roubaix this spring. Only 18, it's pretty hard to say where this is headed, but if you're in the habit of keeping young kids on your cycling-fan radar screen, save a blip for Craddock. He is expected to join the Garmin-Transitions development team for next year, but no decision has been made. 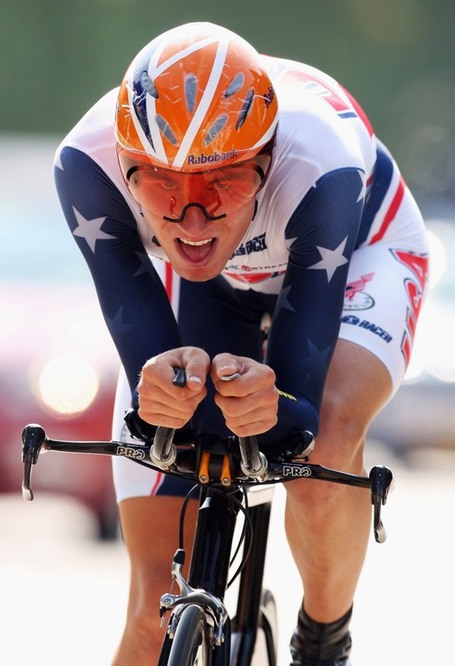 Probably the next American name you'll see in the show, if you haven't already. Van Garderen, 21, turned heads with a third place in the Criterium du Dauphine, a race attended by many of the sport's biggest names. He rolled across the line at the legendary Alpe d'Huez only 1.12 behind winner Alberto Contador. Strong stuff, in his first pro season with the HTC-Columbia development machine. Fans should probably temper their enthusiasm a bit -- top stage racers develop a bit more slowly than one-day riders and sprinters -- but Van Garderen is already one to watch and hopes to make his grand tour debut sooner rather than later.

American cycling has its share of stars in the making, but other countries do too and development is something you have to earn slowly, day-by-day. Whether it happens or not remains to be seen, and we shouldn't saddle the youngest guys with expectations. But as a fan it's hard not to be excited for the next chapter.

By the way, Armstrong is the creator of the Trek Livestrong Team and a big supporter of developing future cyclists. I don't know if he set out to put the country on the map, but he and a lot of others are seizing on the momentum created by Armstrong's success and making sure the US is well represented for a long time to come.