So with the mountains looming, I thought it would be a good time to finally give y'all an update about the youngsters in the race. Seeing as Andy Schleck is not exactly young in many people's eyes, he is after all still just 25 and being resplendent in the yellow jersey is something that he looks quite proud to be in and will be fighting with absolutely everything he has in the Pyrenees chasing another former white jersey winner, Alberto Contador.

As Vlaanderen-damus predicted before the race, this category would be kind of boring and well, it hasn't really disappointed in that regard. Andy has pulled away from the next two wunderkinds, Robert Gesink and Roman Kreuziger, by around 5 minutes and the only battle really will be for 2nd as Andy is simply on another level. After those two top ten studs, there is a dark chasm that goes all the way down to Cyril Gautier in 39th place over 31 minutes down.

Another Vlaanderen-damus prediction was that Mark Cavendish would win 3 stages and he has hit that all ready. I would like to thank Vinokourov for not letting him win today so kudos Alexander...now I just have to find a few other guys to pay off so my prediction sticks. While we are on the sprints, even with Cavendish pulling closer to the green jersey, it looks unlikely that he will  adorn himself in green this year though J.J. Rojas is showing again that he is a green jersey contender for the future with solid 4th/5th places. If he continues to develop and doesn't stall and stay where he is, he could end up winning this contest in the future with some Thor-esque escapes through the mountains for intermediate points. 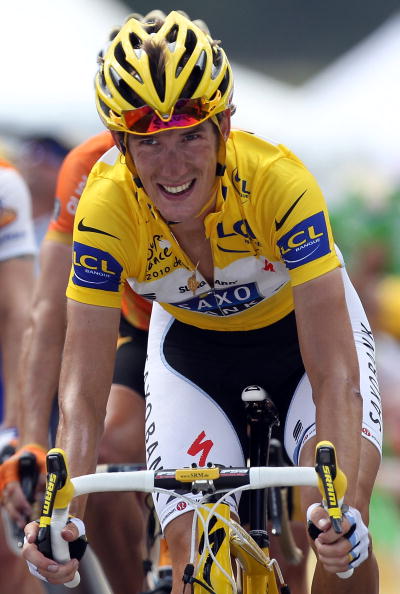 Stage 14-17- Andy, Kreuz and Gesink will be coming out to play to solidify their G.C. position. Breakaways will be in full force in the next few stages and guys like Rafael Valls, Capecchi, Fröhlinger, Gautier, etc. will be trying to find themselves in one that might be lucky to get themselves to the line. Andy had a good chance to win a stage but he will have a huge battle to try and keep AND extend his lead on Contador but good luck to him. I am interesting to see if Kreuziger can recover from his poor Alps performance and climb ahead of some others. Gesink is looking more matured than his Czech counterpart, being in groups that are just behind the leaders and managing his lost time which he will need to do well so he can hang onto a top ten come T.T.-Day

Stage 18: Cavendish will probably break my prediction in Bordeaux with another win but I am hoping Petacchi can pre-empt his sprint which has worked in the past and sneak for his 3rd stage win. Maybe a long breakaway will be able to try something today following the massacre that will be the Pyrenees. That is something I have been missing this year in the medium mountains stages that are tough but allow for big breaks to stick.

Stage 19: Tony Martin will win. I have said it once and will again, it will be a showdown with Cance and both will be tired but they are a head above the rest especially with this type of course.

Final Stage: I need Vino or  anybody to come through with a 2005-like win and smash some egg on the sprinters faces. It should be noted that this is a very short stage in Tour terms, at only 102.5km so there will be guys that you don't see normally up and participating in the sprint so it will be hectic and Columbia better stretch it out if they want to keep Cavendish from getting boxed in.

To the flip for a look at the importance of this youth classification...

An observation that I thought of while out riding tonight was that it seems in this day in age is that it is advisable that riders who have Grand Tour G.C. aspirations need to ride and compete in a G.T. before they turn 26. You have to go all the way back to the 2007 Giro with Danilo Di Luca to find a rider that had not placed in the top 10 in a GT before OR won the white jersey in the TdF who won a GT.

Di Luca even won 2 stages of the Giro before he was 25 so you have to go to Vinokourov in the '06 Vuelta to have a rider that didn't win anything, or even ride a GT, in a GT before 25 and go on to win one. Even Lance won stages in the Tour before he was 26. So when we look at the Top 11 (i'm including 11th since it is Basso), 7 of them have ridden in the top 10 of a GT or won a white jersey before they were 25. They include A. Schleck, Contador, Menchov, Van Den Broeck, Gesink, Kreuziger and Basso.

Out of the other 4, Joaquin Rodriguez and Luis Leon Sanchez won stages in Grand Tours before they were 26. The other 2, Leipheimer and Samuel Sanchez are very different cases. Sammy didn't finish a GT until 2005 and had abandoned the Tour twice before finishing the 2005 Giro in 17th. Levi is something of an anomaly. He didn't turn pro with a Euro team until he was 26/27 and didn't run a GT till 2001, when he finished the Vuelta in 3rd for U.S. Postal

Just some food for thought there but it shows that while the classification might be one of the more boring ones sometimes, the riders that are in it and show themselves are ones that are legitimate Grand Tour talent that have a good chance of winning. Both Gesink and Kreuziger are guys that will ultimately end up as team leaders in the next few years and will continue to develop into G.C. racers but it is always good to look down the line, below the stars because guys like Gautier, Valls Ferri, Fuglsang, et al. are guys that could end up as contenders down the line and these years serve to become more consistent. While it is important to shelter these guys, they have to be put into races where they might come in a little over their heads but if they don't try, they won't know if they have a special talent for these types of races.