Share All sharing options for: Riblon Scores Big Win; Stalemate in the GC 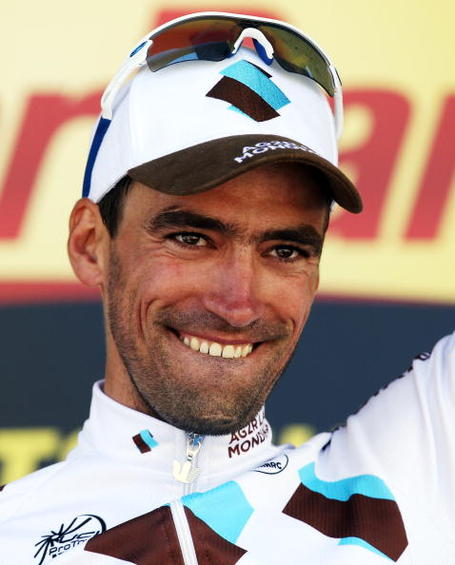 Christophe Riblon of AG2R survived alone from a nine-man breakaway to win the 14th stage of the Tour de France, climbing well all the way to the finish at Ax-3-Domaines. Behind him the battle raged on for podium spots on the category-1 climb, though mostly it was shadowboxing ahead of bigger days, including Thursday's decisive event. Denis Menchov of Rabobank took a very strong second on the stage, showing great form and his historic knack for riding well in the Pyrenees, on both sides of the border with Spain. However, Sammy Sachez, currently third overall, matched Menchov's accelerations and held off the Russian for that hold on his spot. Maillot Jaune Andy Schleck of Saxo Bank rode a somewhat defensive race against Astana's Alberto Contador, seeming content to hold his current advantage rather than seeking any more cushion. Contador, lying second, had his team in control of the major moves as if he led the race... still a likely scenario eventually.