Know Your Tour! Stage 15: When Winning is Losing

Share All sharing options for: Know Your Tour! Stage 15: When Winning is Losing 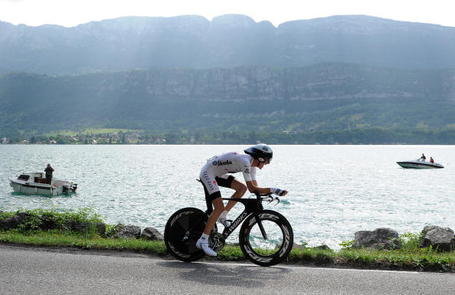 Andy Schleck and Alberto Contador are locked in a two-man battle for supremacy at the Tour de France, for now at least. Schleck holds the lead, but the conventional wisdom is that his time trialling skills are poor enough compared to Contador's that such a cushion will more than evaporate in the final individual time trial next Saturday. Everyone knows this.

Last year, with the same two riders competing for the top spots on the general classification, Contador won the final time trial by 1.45 over Schleck, who came in 21st that day. In the last two seasons, Contador's worst finish in a time trial was fourth, in the Paris-Nice prologue way back in March (when presumably he wasn't aiming to win). Schleck is the current champion of Luxembourg in the time trial, but second was his brother Frank -- they seem to rotate national championship wins at will -- and third place was Christian Poos, a rider from cycling's second division. So ignoring that anomalous result, Schleck's best day on his aero bike was probably that day in Annecy last year, that 21st place behind Contador. He's had some other similar results, but that one finish is pretty standard for him at the Tour de France, the one race a year when we know Andy is at his best, giving his all. [As opposed to the Tour de Suisse, in June, when he's racing to get ready for the Tour rather than to win.]

We will talk more about techniques in the time trial, and like snowflakes no two are alike, but generally past performance is a pretty good indicator of future performance. I am sure there are other sites of note, and invite recommendations in the comments, but I like to use Cycling Quotient or Cycling Fever to look over past results as a way of predicting the future. The former even has a head-to-head function which singles out two riders in all or certain types of races (sprint, ITT, etc.). This is data, and like data you need enough of it and it has to be quality data to learn anything important from it.

When comparing Andy Schleck and Alberto Contador in the time trial discipline, there are a few factors in terms of quality data. They have to both be trying to win -- which for Tour de France contenders is really only the Tour or one or two other moments a year. Length of the race is also a big variable: Sammy Sanchez, currently lying third, can be counted on a high finish in a time trial that's short to moderately long, say 25-35km, but was 19th in his last Tour de France ITT, nearly three minutes behind, on the 53km course. This year's final time trial is also just over 50km, a sort of magic number for Tour de France time trials. And Sanchez, like Schleck, should be genuinely concerned about his current rival for his position, Denis Menchov, whose history says he's usually (though not always) quite good and even a potential winner in a really long time trial. The final factor is the course profile. Most time trials are either close to flat or straight up a hill. Those two profiles can't be compared against each other at all. But the Tour usually uses a mostly-flat course for its final test, and again the data from those races is really useful.

So when the announcers are talking about Schleck as if he's already lost his current 31 second advantage, it's because he pretty much has. Should that advantage balloon out to over two minutes in the subsequent mountain stages, Schleck would then have a genuine chance to win the Tour. Add in a few seconds advantage to the guy in yellow, as the Tour has a long history of guys digging a touch deeper when cloaked in the leader's jersey. But for now, if people are talking about Schleck like he's the hunted and not the hunter, it's with good reason.