What is it? Classic mountain death march.
Got Climbs? Four major climbs, including the Col de Tourmalet (HC) and Col de l'Aubisque (HC)
Yellow Jersey Battle: In an odd twist, the final climb summits with more than 60 kilometers to race. While the climbing is plenty difficult enough to blow apart the race, the long road to the finish may nullify any advantage gained by the climbers.
Ideal Rider: Breakaway day! The Basque riders always show up for the Pyrénées stages, and it's all but certain that an Euskaltel-Euskadi climber will ride the break today.
@Gavia: Why is the final climb so far from the finish of this stage? Really, I don't pretend to know. Maybe it all turn out to be a stroke of genius.

This stage starts climbing from the start, and unlike your average, garden variety mountain stage, the climbing is stacked at the beginning of the stage. Then... not much happens. It's 60 kilometers of racing from the summit of the Col de l'Aubisque to the finish. The teams will have to use The Brain to figure out how to eek out an advantage from this stage lay-out. It's like a fun-house mirror mountain stage, all backwardslike, though maybe not quite upside down.

Still, there's nothing easy about this stage between Bagnères-de-Luchon and Pau. Is it me? Or does the Tour always go through Pau? No, it's not me, the Tour has visited Pau on 62 occasions. That's like a lot and stuff. The stage passes over four major climbs: Col de Peyresourde, Col d'Aspin, Col du Tourmalet, and Col de l'Aubisque. Both the Tourmalet and l'Aubisque are hors catègorie. The Tourmalet climbs for 17 kilometers and much of the time the gradients hover around 9%-10%. That'll leave a mark. 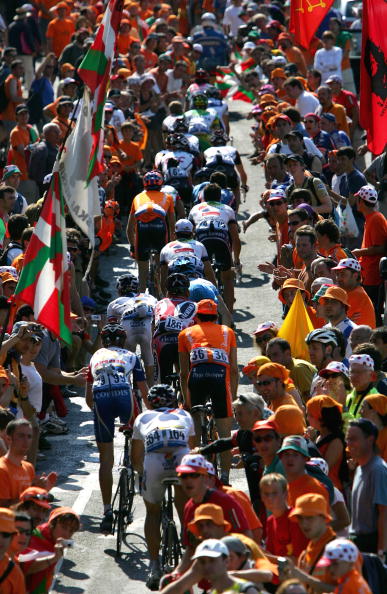 Fédrigo Nabs Sixth French Victory
Cruelty comes in large servings at the Tour de France, and today's helping was dished out to Carlos Barredo of Quick Step, who departed a nine-man breakaway (including one Lance Armstrong) on the downhill run to Pau with over 40 kilometers left to race, only to be caught by the seemingly disorganized eight-man chase inside the last two km. Frenchman Pierrick Fédrigo of Bbox Bouygues Télécom registered the sixth stage win for a French rider... Read More.

Will Previews the Pyrénées, a closer look at tomorrow's climbs

Know Your Tour: Miss Manners, Where Are You?