Know Your Tour! Stage 16: Where is Miss Manners When You Need Her? [Update: Video!]

Share All sharing options for: Know Your Tour! Stage 16: Where is Miss Manners When You Need Her? [Update: Video!] 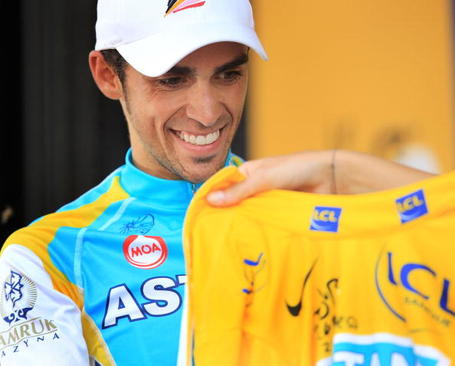 One of the beautiful elements of cycling is the debate. Like so many other sports, we can find endless things to argue about. And like lots of other sports, a prime topic is the unwritten rulebook. In full-contact sports like football or hockey we know that while officially you can hit someone from the shoulders on down, unofficially the knees are off limits. In soccer you don't attack when a guy is down on the field; you do an exchange of kicks out of bounds and reset the play. And of course, knees get hurt in football and players take shots on goal in soccer while someone was "injured" and we argue about whether etiquette should have intervened.

Cycling seems to have more unwritten rules than written ones, and believe me, they have a lot of written ones. This Tour de France has been the setting for some great unwritten rule discussions. Mark Renshaw was thrown out of the Tour for headbutting Julian Dean, but there was just as much discussion of his movement in the sprint which cut off Tyler Farrar -- an element of the sport that combines both written and unwritten dictates. Earlier in the Tour there was enormous discussion of who was supposed to wait for whom in stage 2's oil slick disaster, and why the peloton agreed not to race for points that day. Even when the written rules have been applied, it's raised argument. Carlos Barredo was fined 400 Swiss Francs for bashing Rui Costa over the head with his wheel, but the infraction was lack of decorum. Which begs the question, if he'd bashed Rui Costa more politely, would that have been OK?

On stage 15 to Bagneres-de-Luchon, a more classic unwritten rule was brought into play. Read the polemics, and watch the video [update!] on the jump.

Andy Schleck, clad in the yellow jersey (and fatefully riding a yellow bike), attacked near the top of the climb of the Port des Bales to see if he could get a gap on his chief pursuer, two-time champion Alberto Contador. Schleck accelerated, then slowed, then waved his hand and stopped, climbed off his bike, and began messing with his chain. Sometime in this sequence Contador counterattacked, and by the time Schleck was riding again he was 30 seconds behind an elite group of Contador, Denis Menchov, and Samuel Sanchez. Now, I don't want to trigger a debate about the fact here, since that's happening in the post stage thread. Head over there for that topic.

But in any event, the three top guys pursuing Schleck in the overall standings maintained about a 15 second advantage over the top of the climb, which grew to about 40 seconds during the descent. Was Contador in the wrong for taking advantage of Schleck's mechanical problem? Were the other guys? Or did everyone behave courteously and luck simply tanked the Saxo Bank leader today?

The basic (if unwritten) rule is, you don't attack the yellow jersey for a mechanical or a crash. The purpose of this rule is that you don't want the Tour de France decided by this kind of misfortune. Assuming Contador didn't knowingly attack the stalled Schleck today to try to take advantage of the situation, then the events on the Port des Bales falls into the gaping maw of a grey area and the debate begins. For example, what does it mean to "not decide the Tour"? There are two sides to sort out: who's stopped and who's deciding whether or not if it's OK to attack.

The first question is answered by how much respect the guy standing by the roadside gets. If he's a threat to win like Schleck, or a former winner like Contador or Armstrong, they don't attack him while he's down. Being in yellow helps, though I don't think the guys who wear yellow early in the race, temporary custodians of the jersey in many cases, get the luxury of having people wait. And if you're not in yellow and aren't considered a threat to get there, no waiting. Anyone who has ever been on a big group ride knows that at some point you can't wait for every punctured tire. A good question would be if you stop attacking for Levi Leipheimer or Jurgen Van den Broeck if they have a mechanical issue. Early on maybe, but in the heat of the battle, probably not. Denis Menchov, currently fourth? Probably not. Sammy Sanchez, currently third? Maybe. Tough call.

The second question is, who has to stand down? If an elite guy who passes the first test is the one stuck, not everyone has to wait. The breakaway riders up the road aren't expected to slow down; they were just chasing a stage win. On the other hand, a former winner and favorite like Contador is definitely expected to not attack. Same for Schleck had he and Contador reversed the situation. The problem for Contador is that Menchov and Sanchez are a couple minutes behind and locked into one of the best third-place battles we've seen since 2007. Those two didn't wait because they were locked in mortal combat with each other at a key moment of the race and not necessarily thinking about the yellow jersey. Should they have stood down? Possibly, though I wouldn't want to get between them at that moment.

A third question is, what do you do? Do you sit up and wait? Or do you just keep riding and see if the other guy can catch back on? In past instances, such as Lance Armstrong's crash on a spectator's musette bag in 2003, his fellow leaders got in a quick discussion and supposedly Tyler Hamilton convinced everyone to wait for the then-four-time champion. Amstrong had waited for Jan Ullrich when Der Kaiser flipped into a ditch on a descent in 2001 (executing one of the best self-preserving crash-rolling maneuvers you will ever see). It's a good way to take the argument off the table completely. Another way to answer things definitively is to watch the guy stop or fall, lick your lips, and accelerate. And in future races, switch to steel-belted tires, because the second one of yours goes flat, everyone near you will go into full-gas mode. Justice, like the people administering it, is swift.

For Alberto Contador today, we know he shouldn't attack Andy Schleck in this manner. What made the situation fascinating is the third ambiguity -- so what should he do? -- and the ambiguity surrounding Menchov and Sanchez. Both of them are next to Contador in the standings, so he isn't expected to start gifting them time if they accelerate away. If he helped them stay away, as has been alleged, then he can't just claim he was defensively following guys who threaten his placing. If he didn't help, then Contador starts to look OK.

Again, I don't want to debate the facts in this post. When arguments arise, it's better to keep them in one place rather than splitting up the conversation. Andy Schleck obviously feels terribly wronged and his argument may be the right one. Contador says that mechanical problems are part of bad luck, and anyway nobody worried about his problems on the cobblestones when Schleck was up the road, only a day after he waited for Schleck who'd crashed en route to Spa. Schleck continues to frame the situation in a way where you can apply the clear rule, while Contador is embracing ambiguity with both arms. One way or another, this will still get settled in the proper place: on the road.